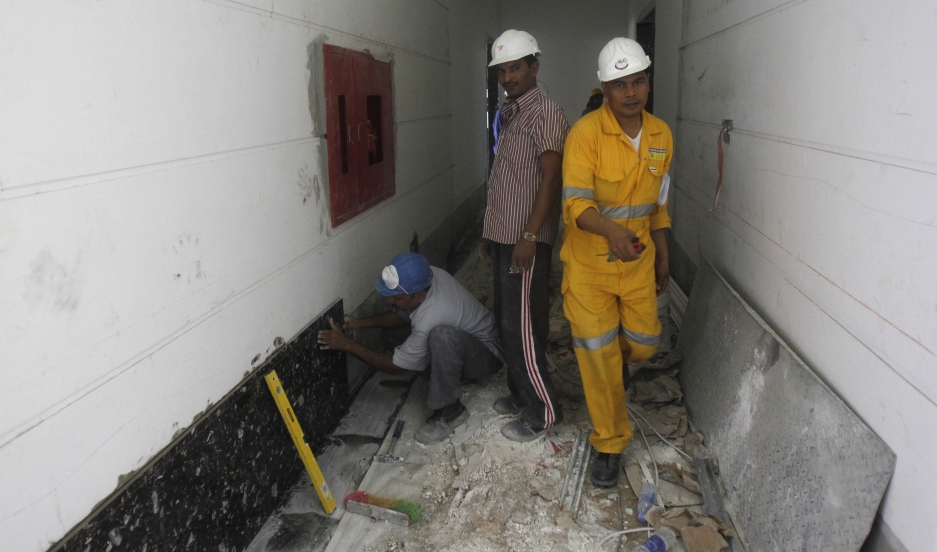 The tiny nation of Qatar is the world's richest country per capita, so it's no surprise that it's pulling out all the stops while preparing to host the 2022 World Cup.

Qatar plans to spend more than $300 billion to construct the stadiums, hotels, shopping malls and other necessary infrastructure for the tournament. But with eight years still to go until the tournament, the project has faced a wave of allegations that Qatar is abusing the foreign workers who are building the new structures.

Sue Lloyd-Roberts, a reporter for BBC's Newsnight, went to Doha to investigate concerns raised by Amnesty International and Human Rights Watch that as many as 1,000 workers have died since Qatar was awarded the World Cup in 2010.

"They're told lies about how much they're going to earn: A number of workers I spoke to are earning less than a dollar a day on which to support families back home," Lloyd-Roberts says. They also "sometimes have to pay their medical expenses, mobile phones and food in Qatar."

One Bangladeshi worker described a life that seems like indentured servitude: "We wake at four in the morning, get to work at about 6 and work until 5 in the evening. It takes an hour to get back to the camp. My room there isn't fit for humans: Six of us share and there's no place even to sit and eat."

So why not leave? "I don't want to stay here but I can't leave," he says. "The company have my passport."

Despite the conditions, there seems to be no lack of migrant workers ready to work in Qatar. But Lloyd-Roberts underscores that many recruits are lied to when they sign up for jobs.

"They're routinely told they're going to earn twice as much as they actually get," she says. "They're not told about the appalling conditions, about working 11-hour days, about how they have to work in temperatures up to 120 degrees Fahrenhei over the summer months."

Workers also suffer from dehydration or malnutrition because the food allowance is not enough — yet many still send money home rather than spending it on the food they need.

Qatar contests the accusations that 1,000 workers have died, a figure that comes from research by the International Trade Union Confederation. Death certificates sometimes show the cause of death as cardiac arrest caused by heat fatigue or exhaustion, or even traffic fatalities. Qatar's authorities don't regard such deaths as directly related to construction.

Yet Qataris are barely aware of the rampant safety complaints and soaring work-related death toll, Lloyd-Roberts says. "You can't escape the sound of building in Doha — it's all around you all the time. It's a 24-hour-a-day operation — and yet Qataris seem blissfully ignorant of it."

Unlike the foreign workers who have built Qatar's modern buildings, most Qataris enjoy leisurely government jobs funded by the government's oil wealth.

"Typically, an entry-level Qatari government worker will earn about $8,000 a month. That compares with a migrant worker who's lucky to take away $200 a month. So it's like two different planets," Lloyd-Roberts says. "They seem to be unaware of what's going on around them, and those I spoke with really didn't know much about the migrant work force or how they were treated."