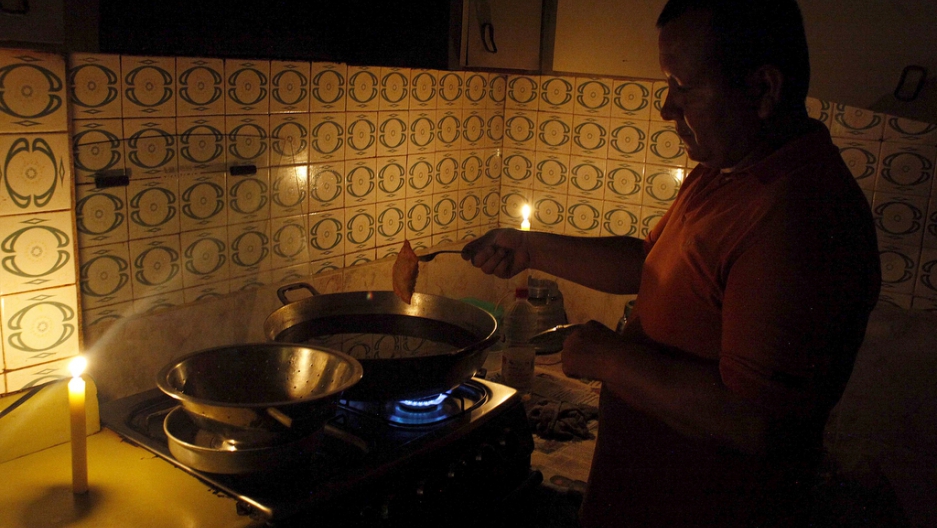 A man cooks near lit candles at his home during a power cut in San Cristobal, in the state of Tachira, Venezuela, on April 25, 2016.
Credit: Carlos Eduardo Ramirez
Share

Venezuela's government has announced enforced leave for public sector employees three workdays a week, in a bid to tackle an electricity shortage that is causing power cuts and protests.

"There will be no work in the public sector on Wednesdays, Thursdays and Fridays, except for fundamental and necessary tasks," Vice President Aristobulo Isturiz said on television Tuesday.

It is the latest drastic measure by the government as it grapples with an economic crisis that has left Venezuelans queuing for hours in shops to buy scarce supplies.

President Nicolas Maduro said the new reduction in workdays, which affects the country's two million public sector employees, would last "at least" two weeks, as he addressed the nation in his weekly state television program Tuesday.

As part of its energy-saving push, the government on Monday launched a rationing plan with power cuts of four hours a day for 40 days in towns and cities across multiple states — but not in Caracas.

The move raised discontent among citizens already suffering from shortages of medicines and basic goods such as toilet paper and cooking oil.

He also rejected the protests and violence that have erupted as the measures were implemented in the western city of Maracaibo, where attacks on businesses and at least one food-transporting truck have taken place, media reports said.

"Whoever attempts violence during circumstances such as these... will be hit with the fullest weight of the law, because they are committing serious crimes against security and the homeland," he said.

Maduro's latest announcement comes after the government cut reduced the workday for public sector employees to six hours and put them on paid leave on Fridays until June 6.

His vice president also said Tuesday that primary and high schools would now be closed on Fridays.

The government blames the power shortage on a drought caused by the El Nino weather phenomenon, which has caused the country's hydroelectric dams to run low.

Venezuela is hoping for a lot of rain over the coming weeks to replenish the reservoirs while the restrictions are in place.

Critics say the shortage is the result of economic mismanagement and inefficient running of the energy network.

Last week, the government also said it was shifting its time zone forward by 30 minutes to save power by adding half an hour of daylight.

Venezuela's economy has plunged along with the price of the oil it relies on for foreign revenues.

Maduro blames the collapse on an "economic war" by capitalists.

The president is under growing pressure from the center-right opposition, which vowed to oust him when it took control of the legislature in January after winning an election.

His opponents advanced Tuesday in their mission to drive him from office when electoral authorities gave them authorization to take initial steps seeking a recall referendum.

The National Electoral Board said it would hand over the paperwork allowing them to seek nearly 200,000 signatures needed as a first step towards calling a referendum.

"The country is on the move to achieve democratically what is allowed under the constitution: to hold a referendum this year and then elect a new government of national unity that can get us out of this chaos," said Julio Borges, leader of the opposition majority in the legislature.

Maduro's opponents say he controls the electoral authorities and the Supreme Court, which has blocked several of their bills in the legislature.

Analysts and some politicians have warned that public discontent could lead to mass unrest in the country, which is already ranked by the United Nations as one of the most violent in the world.