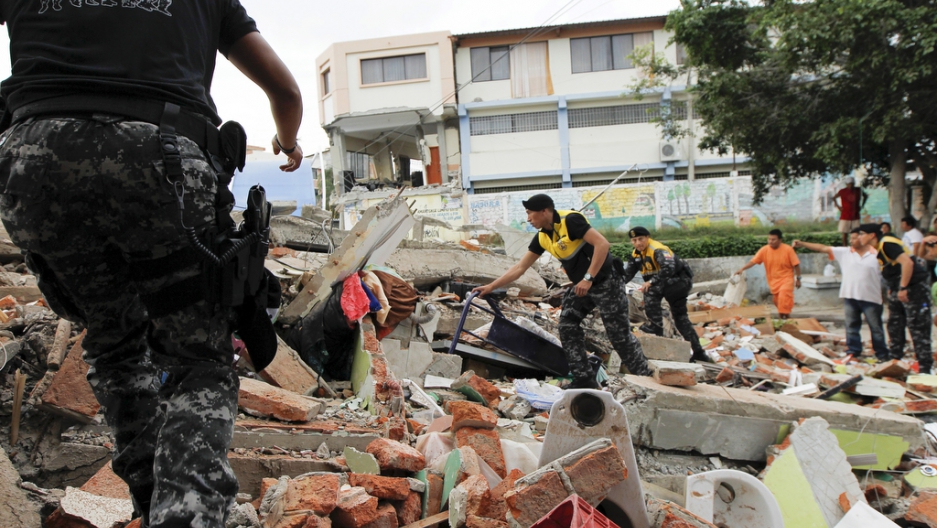 The desperation driving survivors of Ecuador's powerful earthquake to find loved ones trapped under rubble could be seen in the tools many used in their amateur rescue attempts: none.

A small crowd of residents in Manta, a popular beach town in the disaster zone on Ecuador's Pacific coast, clawed away Sunday at big blocks of broken cement and scraps of twisted metal with their bare hands.

"My husband is under there," said Veronica Paladines, a tiny woman tearing at a mound of debris that used to be a hotel and throwing what she could aside, with fury and tears in her eyes.

Her 25-year-old spouse, Javier Sangucho, the father of their two young children, worked at the property.

"He did the painting. He had just gone down to rest a bit when it happened," the 24-year-old woman told AFP.

"It" was the earthquake, a 7.8-magnitude monster that late Saturday toppled buildings along the coast and a ways inland, killing by last count more than 270 people and injuring at least 2,500.

The toll, authorities say, is certain to rise in the coming days.

A dozen men, friends and relatives, helped Paladines pick away at the rubble.

The group had been at it for more than a day, ever since the earth shook and brought down the hotel and many other buildings along the town's main road.

A helmeted fireman finally turned up with a jackhammer to chip apart the concrete floor that had collapsed on Paladines' husband.

Energized by the mechanical aid, Paladines redoubled her own manual efforts. Tears flooded down her cheeks as she hurled debris aside.

The captain of the fire brigade, Javier Carpo, said he had just 30 men and women under his command to help in a town ravaged from end to end. The team has more pleas for help than they could handle.

"Yesterday, we brought out the bodies of three children from a hotel," he said.

The quake destroyed and damaged homes, shops and hotels across this coastal town of some 200,000.

Cracks on buildings left standing hint that the structures may be too fragile to withstand the dozens of aftershocks rattling the region.

Some earthmovers and trucks arrived in Manta late Sunday to help remove debris.

"Throughout the town there are a lot of people trapped," Carpo said, with a resigned air. "We don't know how many."

He left to inspect a set of ruins that had attracted the attention of several hungry cats.

In the nearby district of Tarqui, the stench of decaying flesh floated over everything.

Manuel Bailon, 49, prepared to lie down for the night in his neighbor's trash shelter, close to what remained of his shattered brick home.

On the exposed first floor of his house part of a bathroom wall still stood, with toothbrushes and toothpaste still in their holders.

"We are helping each other," Bailon said, gesturing towards alleys filled with rubble. Crumpled family photos and toys covered in white dust were among the debris.

On the road between Manta and Portoviejo, another hard-hit town, lines of cars stretched endlessly at fuel stations.

There is still fuel, but little else.

"There's no water, no electricity, and if it rains like the other night everything will be soaked," said Karina Bone Valiviese, 39.

The quake survivor attempted to place a plastic sheet over her meager belongings, only to see the wind tear off the flimsy protection.

The mother of four and already a grandmother twice over, Valiviese took refuge with her family in the courtyard of a local church in Portoviejo.

Some 20 families were already there, some with mattresses and armchairs recovered from the wreckage. Someone had even recovered a refrigerator.

The earth had swallowed their homes, which had stood along a road on the side of a river which was now a small lake.

"The earth opened up and the water rose," Valiviese said.

She and several others, such as Yesica Geomara, 36, complained that nobody had come to help them, or even check to see how they were doing.

Her face furrowed with frustration, Geomara steeled herself as she expected to spend the next several nights sleeping outdoors.

"We had just finished our home six months ago. We've lost everything," said her husband, Nilson Moreira, a 46-year-old lathe worker.

"But my machines are still in there, my tools. We're worried about looters."