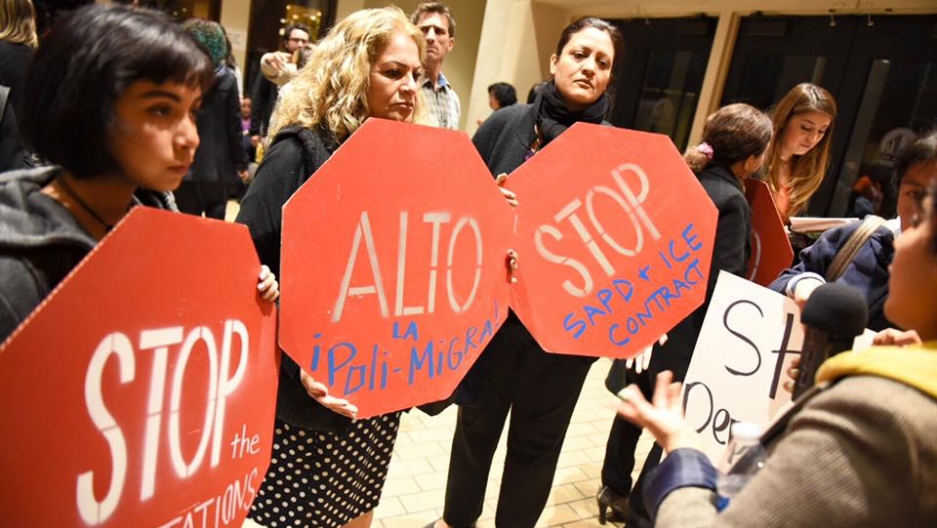 Protesters and attendees at a Santa Ana city council meeting opposed an expansion of the city’s contract with immigration officials to house immigrant detainees. The Santa Ana City Jail has specialized “pods” for trans women, as well as gay and bisexual men who are in deportation proceedings.

After more than two years in immigration detention, Gretta Soto Moreno made a deep wound in her male genitalia and wrote in blood on the white wall of the prison cell: “No more violence on trans women.”

“I was losing my mind,” says Soto Moreno, 43, an undocumented transgender woman who fled persecution in Mexico in 2003 but has endured nearly three years of hopelessness, abuse and repeated full body cavity searches in US detention centers.

She came to the US to seek asylum and overcome the trauma she says she suffered at home in Mexico City. The Board of Immigration Appeals will now decide what’s next for her on the basis of new case law that acknowledges improved gay-rights in her homeland, but a continuation of transgender violence and a record numbers of murders against trans people.

Soto Moreno spent two years at the Eloy Detention Center outside Phoenix, Arizona, before she cut herself. She was moved to the trans women wing of the Santa Ana City Jail, near Los Angeles, where she spent nine months. The conditions of her detention, however, did not improve much.

“There are profound problems with the system across the board,” says Keren Zwick, Soto Moreno’s lawyer and the managing attorney for the LGBT Immigrant Rights Initiative at the National Immigrant Justice Center in Chicago. “ICE is not capable of keeping trans women and other groups safe.”

When a population has specific health needs, including hormone and HIV management, the problem becomes more acute, she adds.

Her concerns are widely shared. In Santa Ana, a large immigrant hub in Orange County, public outcry halted ICE’s proposed expansion at the city jail. Michele Martinez, a councilmember who spoke out against expansion, says limiting the program was “the right thing to do.”

ICE said in an emailed statement that “a search for alternate facilities is underway, however, we’re not yet prepared to discuss a specific timeline.” The agency “plans to continue to operate the unit at Santa Ana.” Its current contract with the city ends in 2020.

As of April 5, 27 trans women and 29 gay and bisexual men — all in deportation proceedings — were being held in two, separate units of the Santa Ana City Jail. Soto Moreno was released March 7, after a coalition of nonprofit advocates for lesbian, gay, bisexual and transgender migrants raised $7,500 so she could post bond.

Gretta Soto Mareno was in immigration denention for two years and nine months, before she was released on bond with an ankle bracelet while she awaits the result of her asylum request.

Her story began in 2003 when she came to Arizona in the back of a pickup truck. She was running from the beatings and threats that she had suffered since childhood when relatives caught her wearing girls’ clothes. Soto Moreno transitioned with hormone therapy in Phoenix in 2006, but continued to work as Carlos, her birth name. She bused dishes at first, but eventually became a manager at a local restaurant. During that time, she says she tried twice to apply for asylum but could not get information from local immigration officials about how to do so.

Some employers supported her in private, but the pressure of being “Carlos” and the struggle to make a living took a toll. That’s why, she says, she made a mistake. Soto Moreno spent 20 days at Eloy Detention Center in 2011 after being convicted for driving under the influence. That’s where she got help from a nonprofit organization to begin her asylum request. She caught ICE’s attention when she was arrested again in 2013 for driving under the influence without a license.

During her years at Eloy, where she was housed with men instead of women, she says she was taunted. “I was verbally attacked by officers and detainees all the time,” Soto Moreno says.

A guard who noticed her pink toenails called her a “stupid faggot” and said, “I don’t know what you think you’re doing here.” “You’re not a woman. God hates you!” were frequent comments.

ICE has routinely placed trans women in male facilities, which often exposes them to sexual assault. Human Rights Watch reports that in 2014, 33.2 percent of immigrant trans women held in state and federal prisons reported abuse by other prisoners — 15.2 percent say they were abused by staff members.

At Santa Ana, though she stayed with other transgender women, Soto Moreno says she still had problems with guards.

The nonprofit organization Community Initiatives for Visiting Immigrants in Confinement (CIVIC) connected Soto Moreno with local volunteers and helped her get on her feet after her release. Executive director Christina Fialho says that officers at the center, though it is meant to specialize in the detention of people like Soto Moreno, are not well trained.

“[Trans women] asylum seekers [are] told by guards to ‘use their male voice,’ and ‘act male’, on an almost daily basis,” she says.

ICE detains two-thirds of lesbian, gay, bisexual and transgender migrants in deportation proceedings. This, according to a letter members of Congress sent to the Secretary of Homeland Security, contradicts the agency’s own policies as outlined in a “Transgender Care Memorandum” (PDF).

“ICE’s own intake system recognizes the risk LGBT immigrants face in detention and says they can release LGBT immigrants 70 percent of the time. However ICE officers consistently override this and use their discretion to detain anyway in 68 percent of those cases,” the letter says.

Approximately 65 trans women out of a total of 30,000 migrants and asylum seekers are imprisoned across the country on any given day, according to Human Rights Watch.

ICE’s aggressive strip-searches are among the most controversial issues of their detention.

Soto Moreno says the searches were bad at Eloy — a male officer touched her inappropriately, she says — but they were more frequent and invasive in Santa Ana.

“They even used a flashlight [to check my cavities],” she says.

Fialho say these searches of trans women are often performed by male guards, which violates ICE standards, as well as state and federal codes.

Soto Moreno filed many grievances at both prisons. “But they’re corrupt,” she says. “They’re very corrupt people and they cover up for each other.”

She survived by writing and drawing cartoons. At Santa Ana, she also took English, “attitudes for success” and computer classes — “the only saving grace,” she says — but eventually dropped out to avoid strip-searches when she changed floors to attend sessions. 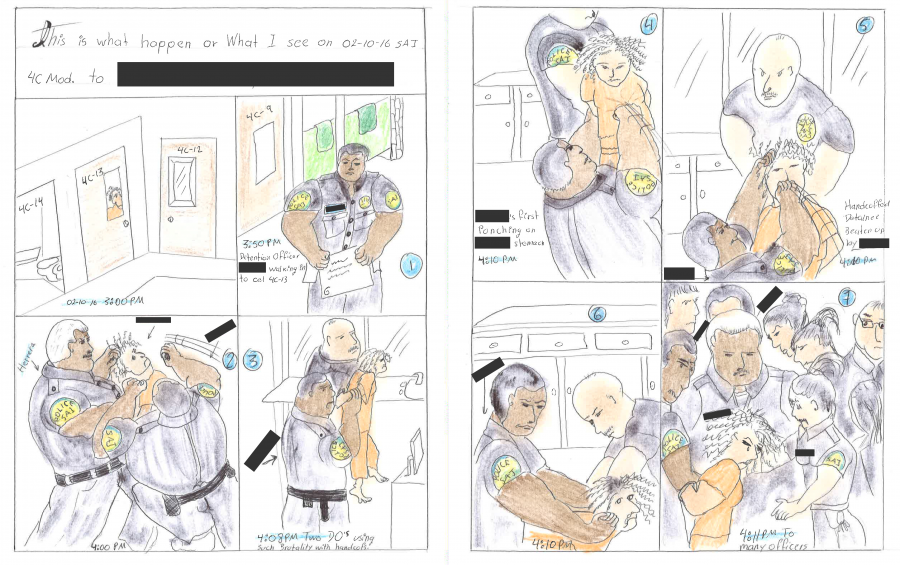 Gretta Soto Moreno drew cartoons of her time at the Santa Ana City Jail, in a specialized section for trans women who are detained while in deportation proceedings. Here, she depicts officers abuse of another detainee. The names of the officers have been redacted.

“Maintaining facility safety and security requires procedures to be implemented,” says Christina Holland, jail administrator at the Santa Ana Police Department. “We understand some of [them] will trigger complaints. We evaluate [them] and [make] changes where appropriate.”

Soto Moreno also says her transition-related treatments were reduced both at Eloy and at Santa Ana, where she received a minimum dosage of hormones without a medical explanation.

“It changed my body. It wasn’t right,” she says.

This is not unusual, says Aaron C. Morris, executive director of New York-based Immigration Equality. The medications must be deemed “medically necessary” by an ICE doctor, and many people are routinely denied their prior regimen.

Fialho, with CIVIC, says many advocates’ attempts to help these detainees have been thwarted. “ICE adopted a head-in-the-sand approach and suspended our affiliated visitation program,” she says.

Furthermore, transgender detainees were forced to transfer to Santa Ana from across the country, uprooting them from their communities and legal services, says Morris. “That’s important,” he says. "Without an attorney, their legal ability to present their asylum cases to an immigration judge is severely hampered."

Santa Ana Chief of Police Carlos Rojas says his department is looking for community-based alternatives to detention, but did not provide details on what those alternatives would be.

Soto Moreno is currently living in Los Angeles with friends who she met through CIVIC networks. She was released with an ankle bracelet that tracks her movements, despite having posted bond. She is now working toward her high school diploma while adjusting to the psychological struggles of life outside of prison. Her asylum case is moving forward.

In Santa Ana, she says, trans women hesitated to even touch shoulders with each other when sitting down to watch television. Those feelings have continued since she was released.

“They drill it so much in our brains that when we’re outside, we’re still afraid of people.”

The Santa Ana City Council heard the public's comments on a proposal to expand their agreement with ICE in early February. After a lengthy comment period, which included testimony about conditions for trans women who are held there, they voted down the proposal. Here is a recording of that session, via the city of Santa Ana.