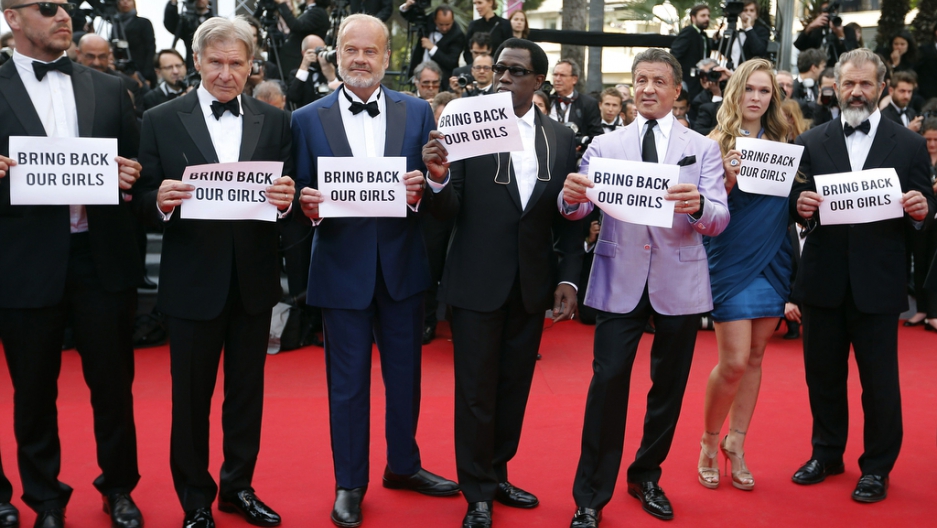 Actors Sylvester Stallone (3rdR) and cast members of the film 'The Expendables 3' hold placards which read 'Bring back our girls' as they pose on the red carpet during the 67th Cannes Film Festival in Cannes on May 18, 2014.
Credit: Regis Duvignau
Share

More than a week after 276 schoolgirls were kidnapped from the remote northeast Nigerian town of Chibok by Boko Haram on April 14, 2014, a lawyer posted the first #BringBackOurGirls tweet.

Ibrahim Abdullahi's hashtag would go on to become one of Africa's most popular online campaigns and was shared more than four million times over the next month on Twitter.

Social media heavyweights such as Kim Kardashian and Chris Brown endorsed it, while US First Lady Michelle Obama and British Prime Minister David Cameron both held up signs of the slogan.

#BringBackOurGirls undoubtedly brought global attention to a brutal but largely ignored conflict that since 2009 has claimed at least 20,000 lives and made more than 2.6 million others homeless.

It also galvanized international support against Boko Haram at a time when Nigeria's military was floundering badly in the face of the better-armed rebels, losing territory and vital public support.

But two years on, #BringBackOurGirls risks becoming another example of the limited influence of online protest, according to Ufuoma Akpojivi, a media researcher at the University of the Witwatersrand in Johannesburg, South Africa.

On the ground, 219 of the 276 girls are still missing, their Government Girls Secondary School is a broken ruin and Chibok is desperate for development.

"There's nothing to show for it," said Yana Galang, whose daughter Rifkatu is one of the 219 girls who haven't been seen since they appeared in a Boko Haram video message released in May 2014.

"The only thing that matters now is for my daughter to be back," she said, as fellow parents prepared to meet at the stricken school in Chibok on Thursday for a prayer vigil.

"This has been going on too long."

Translating social media success into tangible change on the ground has always been a challenge to online campaigns such as #BlackLivesMatter and #OccupyWallStreet.

#BringBackOurGirls was an initial success, bringing protesters out to the streets in a country where mass public demonstrations are rare.

But domestic politics in Nigeria trumped global outrage, as the online protest became entangled in the complicated web of identity politics and partisanship, said Akpojivi.

Supporters of Goodluck Jonathan, a southern Christian who was Nigeria's president at the time of the kidnapping, dismissed it as a fabrication by his political enemies in the Muslim-majority north to derail his re-election campaign.

"They (Jonathan's government and supporters) thought the movement was fuelled by the opposition to discredit them, so the government criminalized the movement," said Akpojivi.

One woman was arrested after meeting Jonathan's wife, Patience, while the police moved to ban daily protests by Ezekwesili and other #BringBackOurGirls activists in Abuja.

The Jonathan administration's alienation from the campaign — and an apparent reluctance or inability to find the girls — highlighted the limits of well-meaning online protesters.

"There is the misconception that embracing social media or using new media technologies will bring about the needed change," Akpojivi said.

"Retweeting doesn't mean that the government will take action. We need to understand that there are other political and economic issues at play."

Despite the original #BringBackOurGirls tweet originating in Nigeria itself, US Twitter users posted the majority of the tweets.

Yet even here, the world's superpower has been unable to secure the girls' release, despite Boko Haram-related counter-terrorism assistance totaling more than $400 million to date.

A month after the kidnapping, US President Barack Obama sent some 80 military personnel to neighboring Chad to help locate and "support the safe return" of the schoolgirls.

US and British surveillance experts reportedly located some of the missing girls and passed on their findings to the Nigerians but they failed to follow up.

A Pentagon spokesman said the personnel were redeployed because the Nigerian military had stopped requesting their services.

More direct Western military assistance for the counter-insurgency and finding the girls has been limited by concerns about human rights abuses by Nigeria's armed forces.

Congresswoman Frederica Wilson, who leads the #BringBackOurGirls campaign in Washington, said she has struggled to get more funding for security assistance in Nigeria.

"Too many people think it's okay to limit their advocacy for this cause to tweeting," Wilson said, adding she is worried for the girls.

"I pray they are still alive but the reality is that we don't know where they are or what they are doing."