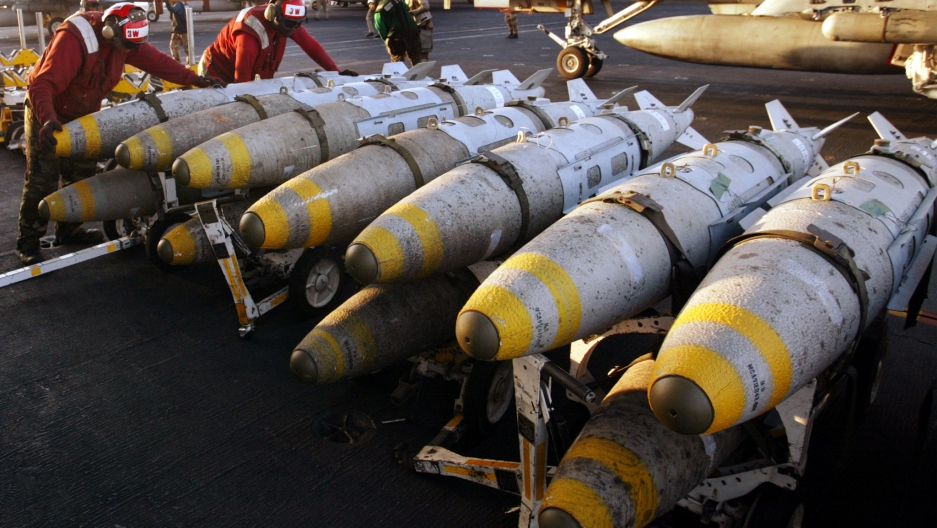 Ongoing air wars in Middle East have caused an unexpected dip in the Pentagon’s stockpile of air-to-ground munitions — and Washington has been slow to address the supply problem.

The Pentagon has had months to deal with it.

Since then Secretary of Defense Ash Carter has asked Congress to include funding for 45,000 smart bombs in the Defense Department’s 2017 budget. But it could take a while to rebuild the stockpile.

“The US maintains a pretty steady inventory of bombs and missiles for full-on war scenarios,” says Roman Schweizer, aerospace and defense policy analyst at Guggenheim Securities in Washington. “But 2 1/2 years of fighting ISIS and continued bombing in Afghanistan have exceeded weapons-use projections.”

Operation Inherent Resolve, the US-led military intervention against the Islamic State of Iraq and the Levant flies bombing missions in Syria and Iraq. The United States, which flies a majority of the missions, strikes ISIS targets with laser- and GPS-guided bombs, Joint Direct Attack Munition bombs, Joint Standoff Weapons, and air-to-ground missiles, such as the Hellfire. Per unit pricetags on these munitions range from around $25,000 to close to $400,000.

"In the early days of the [Syria] campaign the Navy fired a bunch of Tomahawk cruise missiles," notes Schweizer, "and those are in the $1 million cost range — but they're really the higher end of what you might use if you have a contested airspace and you don't want to put aircraft over targets."

In the war against ISIS, the United States and its allies control the airspace, allowing their planes to fly low and close to targets. "Pilots are able to get close because you are not fighting a very sophisticated — albeit a brutal — enemy, and you're able to use shorter range- but more precision-guided munitions."

There is good reason for precision, notes Schweizer.

"Because these are obviously some congested environments, and the enemy adapts and puts himself in positions where he's hard to target without collateral damage or civilian casualties." Estimates of the numbers of civilian deaths in the air war against ISIS vary, but the independent watchdog group Airwars.org estimates more than 1,000 civilians killed, mostly by Russian or Syrian air strikes.

The United States dropped more than 20,000 guided bombs and missiles on Iraq and Syria in 2015. In recent months the US has transferred additional quantities of bombs to allies in the region. "There are also NATO and Gulf Cooperation Council allies participating in these strikes as well, and in some cases they're drawing off of US stockpiles because their own domestic inventories may not be sufficient."

The Gulf countries — primarily Saudi Arabia and the United Arab Emirates — have been less active in the war against ISIS, instead focusing their military efforts since March 2015 on defeating a rebel group that controls much of the territory in their neighbor Arab country, Yemen.

The Saudi-led coalition, with American support, has been bombing Yemen with munitions made by US companies including Raytheon, Boeing, General Dynamics and Lockheed-Martin. They have purchased American smart bombs and missiles through US State Department-brokered deals for more than a decade.

Following a Camp David summit in May 2015, the US approved a new sale of $1.29 billion in munitions to the Saudis intended to replace bombs already used in the Yemen War. It also approved a $380 million sale of guided bombs to the UAE.

While the US does not routinely report when weapons are delivered to its foreign customers, State Department spokesman David McKeeby did say in US Defense News in January this year that “the US government and industry … delivered 4,500 precision-guided munitions to the GCC countries in 2015, including 1,500 taken directly from US military stocks — a significant action given our military’s own needs.”

So is the US in danger of running out of bombs?

Roman Schweizer says US bombmakers have the capacity for producing enough weapons to meet military demands. “If we were in a state of war we’d be running three 8-hour shifts, 24 hours a day” to supply the war effort.

He adds, "Lockheed-Martin has said they've been asked to increase their Hellfire missile production facilities. As well, Boeing, which makes the Joint Direct Attack Munition, [is] also ramping up production. There are a few categories of munitions that are sort of the preferred, or most widely used, and I think they are definitely busy." In December CNN reported an unidentified US official saying it could take "up to four years" to rebuild the Hellfire missile inventory.

“What the Pentagon wants to do now is an unresolved question,” Schweizer observes. "We’re using munitions at a rate we didn’t expect, and we don’t yet know how long the current rate of use will continue.”