From trash to haute cuisine — the ingredients of these servings of white bean and lentil salad with oranges and mint had been headed to the dumpster at a wholesale market before they were salvaged by the staff of Paris' Freegan Pony restaurant.

Head to the far side of the 19th arrondissement in Paris, on metro line 7. Walk across a large, grimy square and look for a tall set of metal doors under the highway overpass. When you see the bright green painted pony, you’ll know you’ve arrived at the Freegan Pony restaurant.

It’s clearly not your usual Parisian dining locale. In fact, it’s an illegal squat, set in a cavernous dark space. It’s as urban-gritty as it gets, furnished with long wooden tables, sofas and cushions, dimmed lights and occasional loud music.

Since it opened last November, the restaurant has been serving 80 meals a night, four nights a week, on a pay-what-you-wish basis. And its menu is basically created out of food that’s too old to sell, but still good to eat.

That’s the idea behind the name. Freeganism is the practice of salvaging discarded but perfectly good food, for free. 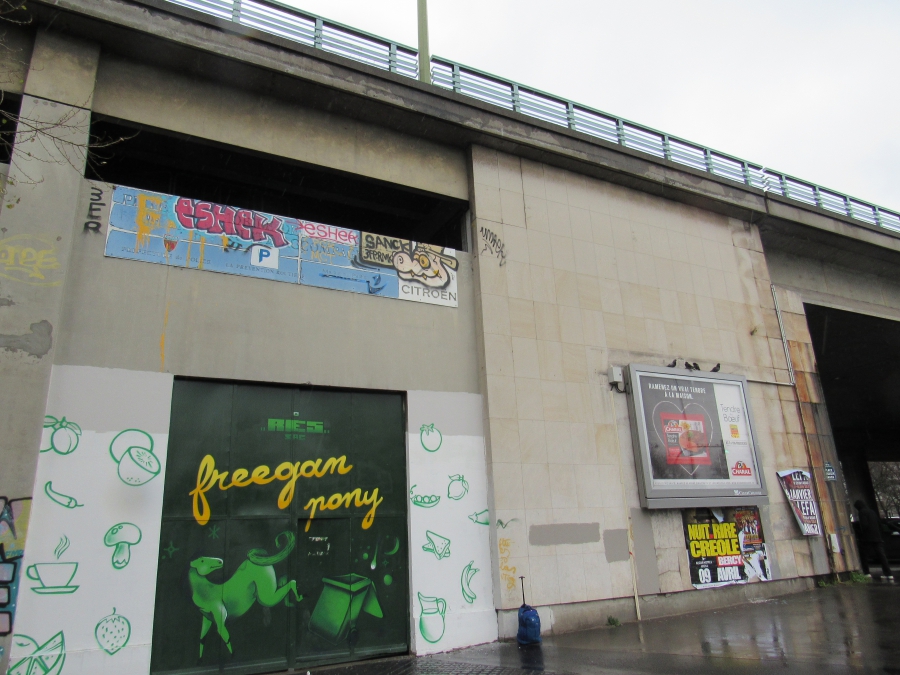 Not Your Average Joseph's: Freegan Pony serves up salvaged food in a squat in an abandoned space under a highway.

“I’ve been feeding myself like this for years,” says Aladdin Charni, who heads the non-profit restaurant with a team of volunteers and paid chefs. “Not because I have to, but because of my political convictions. I find our way of consuming and throwing out food is totally absurd, as if it had no value.”

In fact, researchers believe that roughly a third of all the food we produce is never eaten. That's a huge waste of resources and energy and a big impact on the climate from emissions related to all that wasted food.

Charni harvests most of the food for his restaurant from the gigantic Rungis wholesale market on the outskirts of Paris. Tons of food reaching the end of its shelf life at the market is thrown away every day — meat, dairy, seafood and produce. Charni is mostly interested in produce, since Freegan Pony is strictly vegetarian and sometimes vegan. 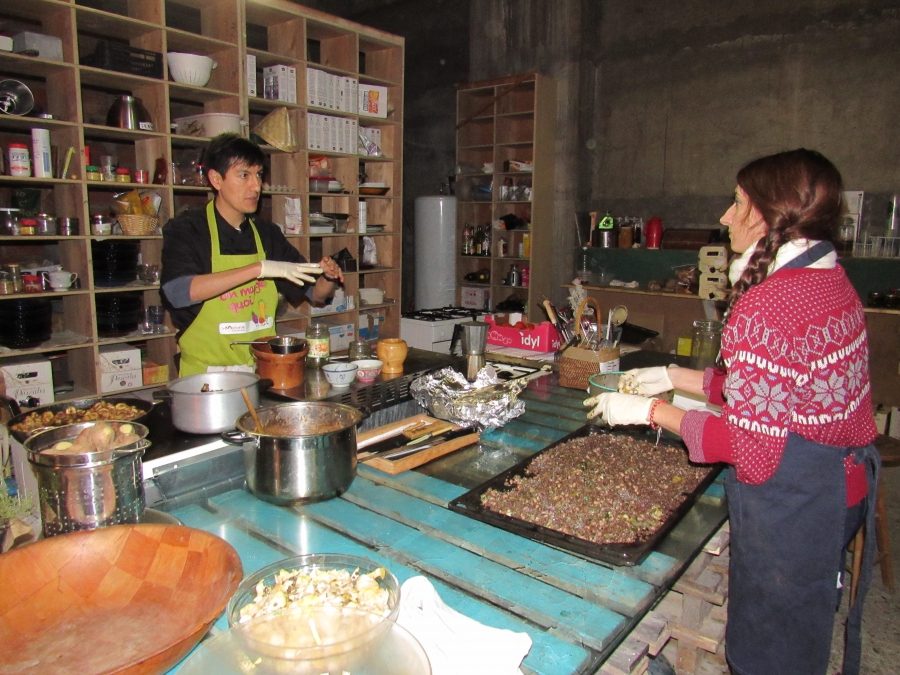 Freegan Pony guest Chef Santiago Rosero explains to a volunteer how to prepare a recent evening's dish of lentil risotto, with pickled and roasted vegetables.

On a recent evening in Freegan Pony’s kitchen area, chef Santiago Rosero was working with the day’s ingredients, starting with potatoes. 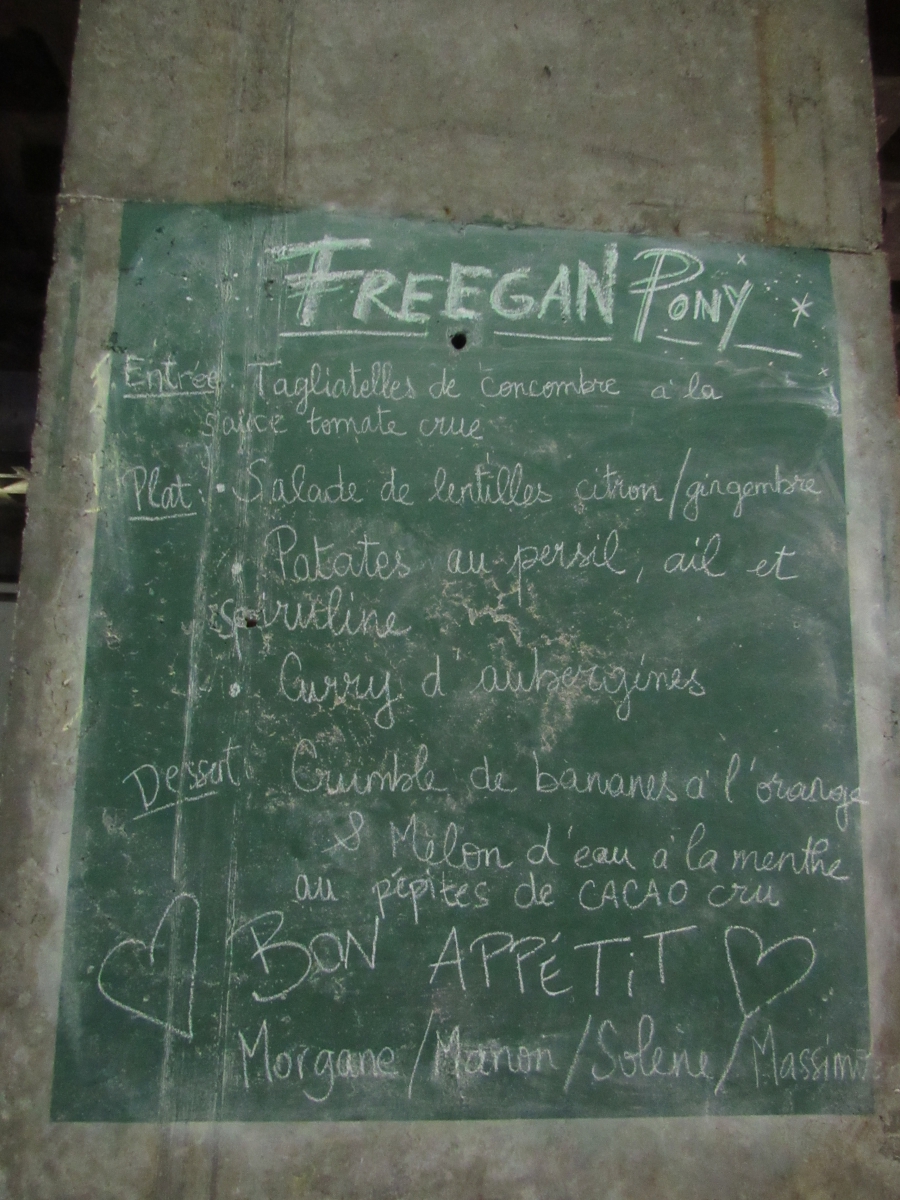 “I'm going to make a thick potato soup that comes from my country, Ecuador, which is called Locro de Papa,” Rosero says. “And I had the idea to make the lentils in a risotto way, with some pickled and roasted vegetables. And for dessert, I see that there are some apples and bananas, so I’m going to try to make something with that.”

Next to him, pastry chef Frances Leech prepared a buttery dessert with a food processor.

“I am making shortbread,” she says, “sablés, flavored with a little bit of orange zest and little bit of pepper. And it’s to go with the apple compote we have here.”

Many of the restaurant’s dishes have an ethnic flavor, to cater to some of the restaurant’s usual clientele — homeless migrants, whom Freegan Pony regularly invites in to eat and even sleep in the space. Most are Afghans, like Sultan Ali Tawakuli, who was dining on a fragrant Afghan stew. You could smell the spices in the air.

Freegan Pony has staked out some unique territory among Paris restaurants, but it’s not alone in addressing the issue of food waste. A new law in France requires supermarkets to donate unsold food.

But founder Charni says most food waste comes from wholesalers, who aren’t covered under this law. That’s why Freegan Pony goes to the wholesale market, to reclaim food that would otherwise still be thrown away.

Of course the randomness of what’s available can make for some interesting challenges. Just ask American expat Mardi Hartzog, who is one of the cooks. 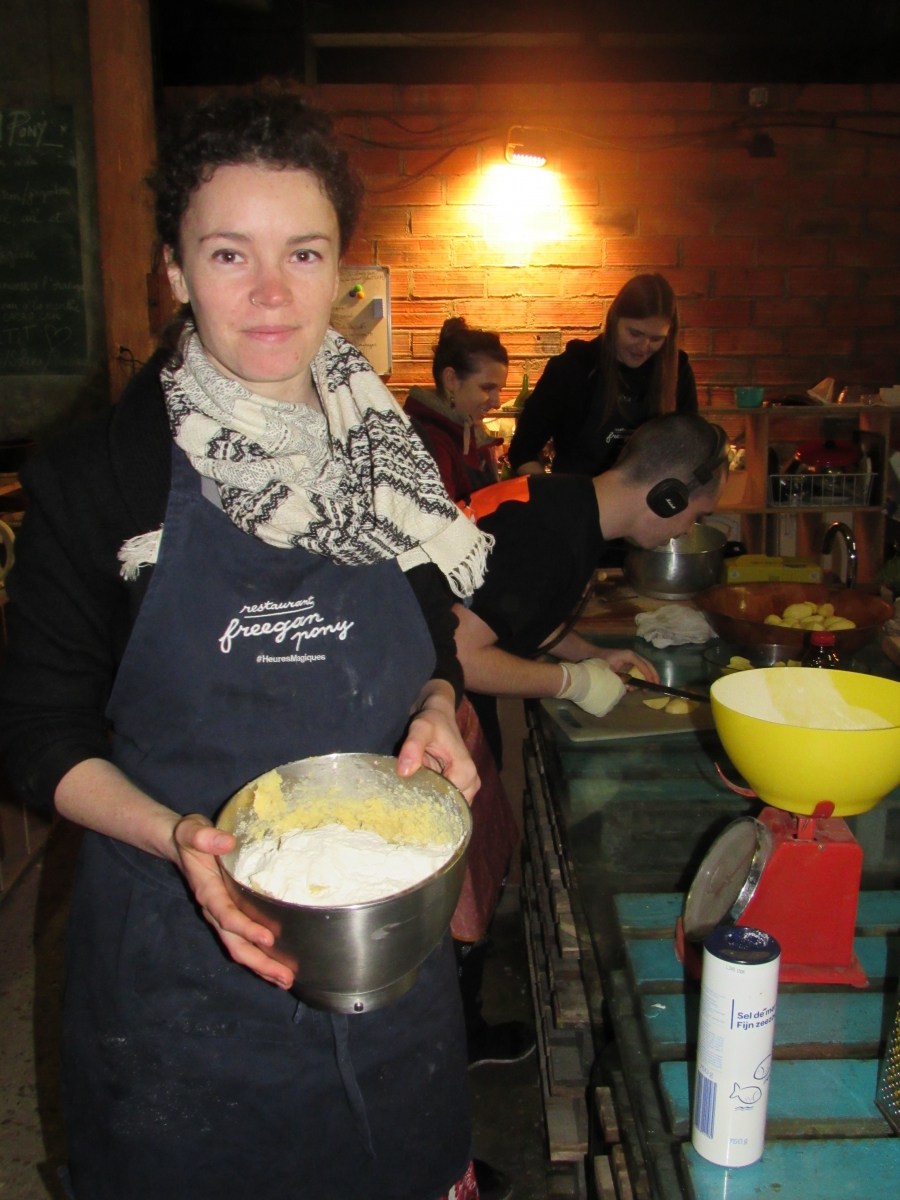 “I arrived once, and all we had was cabbage, and ... 50 kilos of parsnips ... and a bunch of oranges,” she laughs. “And so then you just have to start getting really creative. It did end up being mostly a soup, but then I also made a really nice sauce with some overripe persimmons, so sometimes you get inspired by things you didn't think were possible.”

Limitations encourage creativity, Hartzog says. But now and then, she has enough ingredients to make something truly elegant, like her most recent dish — a white bean and lentil salad with oranges, fresh.

“It was pretty nice,” Hartzog says.

Judging from the thumbs up at the tables, the evening’s meal was a hit with the 80 or so patrons. And as the evening progressed, there was even a party atmosphere as loud music was pumped in.

Of course, for all its good intentions, the Freegan Pony restaurant is still illegal, and a local court has moved to shut it down. But Aladdin Charni says he is hopeful they’ll be able to work something out with the city.

No matter what, though, Charni says the group behind the restaurant will keep finding ways to pursue its mission to reclaim wasted food and turn it into elegant cuisine.