Chef François Pasteau says, in the kitchen of his restaurant, l'Épi Dupin, every part of the duck is used, from breasts to bones.

French gastronomy may evoke thoughts of butter, cream, duck fat, hollandaise and fancy pastries — in other words, rich, fatty food that will fill your belly.

But French cuisine has had a makeover over the past years and that is due in no small part to the Earth’s changing climate.

In fact, many restaurants now have on their menu dishes that have been deemed “Good for the climate.”

François Pasteau has run his small gourmet restaurant l’Épi Dupin in Paris for 20 years. I met him in his kitchen as he was stirring a fragrant soup. 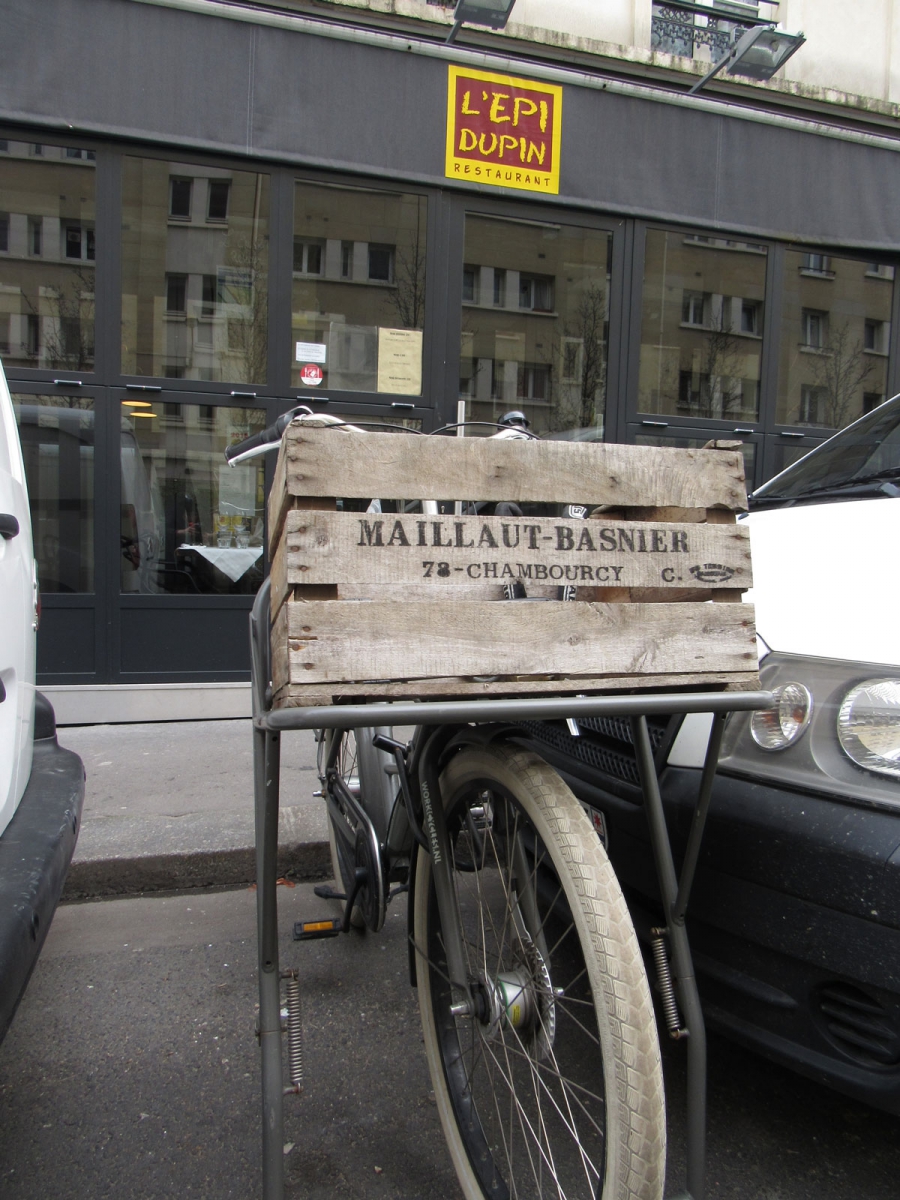 The restaurant l'Épin Dupin in Paris spares no efforts to get its errands done. Bicycles and an electric truck are used to get a lot of the groceries.

“It’s a bit creamy,” he said, “looking at the color and consistency, “so that will be the soup of the day ... sea scallop soup.”

This sea scallop soup, served with a swirl of savory chestnut mousse, is a sweet and salty treat. But here’s the thing: It’s made with scraps left over from the preparation of Pasteau’s sea scallop main dish. Food waste is a huge problem globally, and is responsible for a significant slice of the greenhouse gas pollution that's contributing to climate change. But in this kitchen, nothing gets wasted. Shrimp shells are boiled for broth. Apple cores are turned into apple sauce. As for duck, Pasteau says every part is good for something here.

Besides the meaty duck breasts, the neck can be served stuffed, scraps of meat can be used for terrines and savory pastries, and bones can be roasted with vegetables to make a delicious caramelized sauce.

Putting all good ingredients to use is part of Pasteau’s mission as a chef and as the president of the restaurant and food industry association Bon pour le climat, or Good for the Climate. The group’s philosophy is simple: Educate the French about climate-friendly cuisine. And making sure there is no waste is just the beginning. It also means giving priority to vegetables and plant proteins over animal proteins, which have a much bigger carbon footprint.

But Pasteau says that will mean a cultural shift in France. “When we think about a meal, we always think about the meat and what we can put on the side with vegetables,” he says. “I think the main thing is to change our mind and to think first about the vegetable, and then to add some meat or fish on the side, you see?"

When it comes to fish, Pasteau says he uses only healthy fish stocks, so no more red tuna or swordfish for example. Fresh whole grain bread is baked on the premises every day. Also, no more costly trucked-in mineral water. Instead, tap water is micro-filtered on site. And at the end of the day, the vegetable trash is hauled off to be turned into biofuel.

Pasteau says taking those steps means each meal can be an opportunity to inspire change. But the customers don’t pack l’Épi Dupin for the lessons.

Isabelle Demeure is having duck magret, with braised cabbage, walnuts, dried apricots and a parsnips purée. She’s a regular. “They really follow the seasons here,” Demeure says, “and there is a real original take. You feel that they pay attention to the provenance of products, to French high standards, all attributes of a quality table.”

See also: At this Paris restaurant, 'freegans' fight waste by cooking up food diverted from the dumpster

Just a few metro stations away from l’Epi Dupin, the renowned upscale restaurant Lucas Carton has been setting a quality table since the 1800s, at prices starting at $150 for lunch. But even in this iconic institution, head chef Julien Dumas is making big changes with each menu. 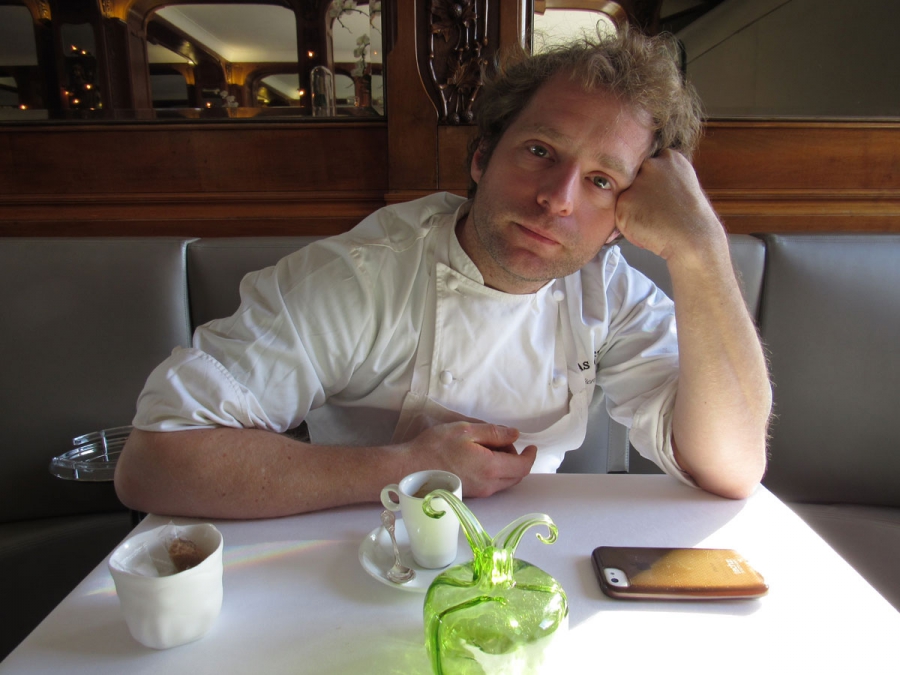 Even though Lucas Carton is a historical and iconic restaurant in Paris, chef Julien Dumas says he is not afraid to make big changes.

"Today there is bream and oysters, pollock and buckwheat,” he says. “Buckwheat normally comes from Russia, but this one is grown in Auvergne. Then we have Swiss chard, then a duckling, peanuts from Bordeaux and Yuzu from Perpignan.”

For Dumas, the key to responding to the Earth’s needs and changing climate is simple: Stay local, and know your food, including the people who produce it. He knows the names of the farmers who grow his cauliflower and his carrots, of his fishermen and even of their ships.

At 36, in a country that reveres older master-chefs, Dumas is young to have attained his prestigious post. But he’s not shy about shaking things up at this Parisian landmark.

Instead, Dumas serves up more seafood, which can have a smaller carbon-footprint. But it doesn’t always. That’s why he also got rid of out-of season lobster, and a beloved dish with crayfish from Scotland. Too far away, he says.

Dumas even took a step verging on heresy. He got rid of a dish that was created by his predecessor and served here for 40 years: Canard Apicius. That is duck breast marinated in an Asian-style spicy broth with honey, served with a concoction of tart apples and dates.

“This is an historical house here, so people don’t understand why I got rid of some items,” he says. “Some complain that I took out the duck dish, it was a classic. But those ducks were mistreated, and the dish called for apples in August, Granny Smith apples that came from Chile. Personally, I prefer to wait for apple season to serve a duck dish.”

Changes on the menu are also now guided by the French palate, which François Pasteau says has evolved quite a bit.

“For a few years now, French cuisine is less fatty," he says. "We serve our cuisine with little sauce, the sauce is very tasty so we don’t have to put so much in a plate. The customer doesn’t want heavy dishes. They want very good produce and the taste of the vegetable, of the meat, of the fish, but they don’t want to have huge dishes with a lot of sauce.”

The chefs behind Bon pour le climat say there’s no contradiction between protecting the climate and maintaining, even enhancing, the art of cooking and the pleasure of eating. And while they’ve raised some eyebrows, they feel they’re following changes in France as much as leading.

For chef Dumas of Lucas Carton, there’s another reason he is putting so much effort into changing French cuisine.