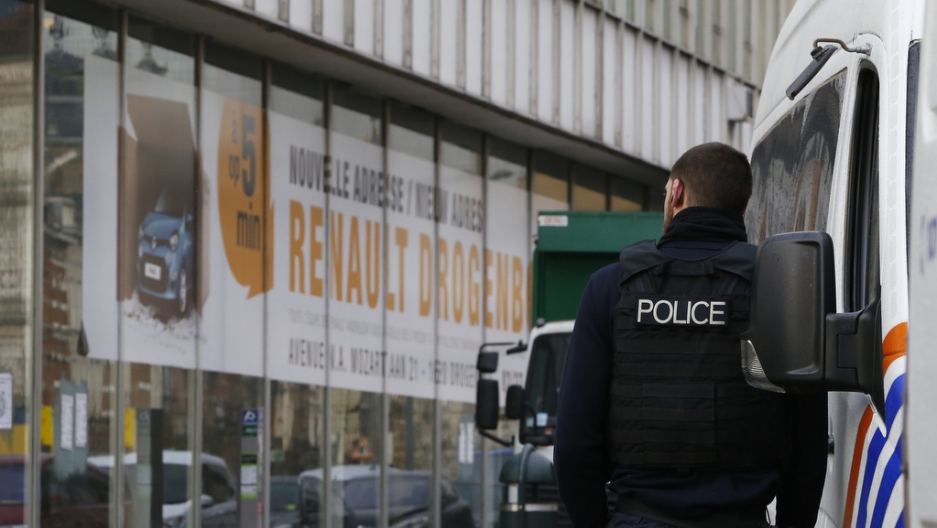 A police officer stands in front of a car dearlership during an operation after fugitive Mohamed Abrini was arrested in Anderlecht, Brussels, on April 8, 2016.
Credit: Yves Herman
Share

Key Paris attacks suspect Mohamed Abrini was arrested along with four other people in a series of raids Friday also linked to the deadly Brussels airport and metro bombings, the federal prosecutor's office said.

"Mohamed Abrini was arrested in Anderlecht," a spokesman told a news conference, confirming earlier reports that he was tracked down in the gritty Brussels neighborhood.

Abrini, a Belgian of Moroccan origin, was seen at a petrol station north of Paris two days before the attacks with other top suspect Salah Abdeslam, who drove one of the vehicles used in the November 13 assaults across Paris that killed 130 people.

Abdeslam, whose brother Brahim blew himself up in Paris, fled back to Brussels immediately afterwards and was finally captured March 18 in the capital, not far from his family's home in the Molenbeek district.

The spokesman said Abrini was arrested along with two other unidentified people.

RTL television earlier showed footage of what it said was likely Abrini's arrest, with a man pinned down on the sidewalk by several armed plain-clothed police wearing facemasks and then being bundled into a unmarked grey car.

Immediately after the March 22 Brussels attacks there was intense speculation that Abrini was the third man seen on CCTV with the two suicide bombers at the airport shortly before they blew themselves up.

A police video released Thursday showed this third man, wearing a hat and light-colored jacket, fleeing the scene and making his way back on foot into central Brussels where he disappeared from view.

"At the moment, the investigators are verifying whether Abrini can be positively identified as being the third person present during the attacks in Brussels National Airport (Zaventem), the so-called 'man with the hat'," the spokesman said.

The spokesman named the two other suspects arrested Friday as Osama K., who went by the alias of Naim Al Ahmed, and Herve B.M.

"Investigators are now verifying whether Osama K. can be positively identified as being the second person present at the time of the attack in the Maalbeek subway station," he said in a statement.

"This second person was seen in the company of Khalid El Bakraoui" shortly before El Bakraoui himself up, he said.

Making another link between the Brussels and Paris cells, Salah Abdeslam had hired the car used to pick up Osama K. in Ulm in Germany and bring him to Belgium in early October, he said.