Helen Oyeyemi appeared on Studio 360 back in 2014when she published her novel"Boy, Snow, Bird," a re-imagining of the Snow White story set in 1950s America. 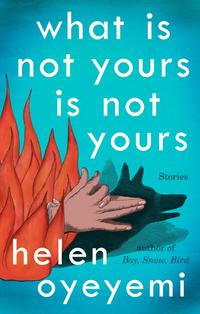 Last month, Oyeyemi came out witha newbook,"What Is Not Yours Is Not Yours."Like "Boy, Snow, Bird," this collection of short stories owes a debt to the conventions of fairy tales, butOyeyemi's new storiesaren't like traditional fairy tales. Oyeyemi's characters live in a world that's a lot like ours, with cell phones and YouTube. When surprise bubblesof myth and magic creep in, they makethe stories feel more like modern parables.

Accountability becomes both carrot and stick forOyeyemi's characters. In "Dornicka and the St. Martin's Day Goose," a woman must make good on a promise made too quickly. In "Drownings," a man is imprisoned for a crime he didn't commit (probably).In "'Sorry' Doesn't Sweeten Her Tea," two teen girls watch the media fallout when their idol is accused of sexual assault. The girls, like the reader, wonder: what would real justice look like?

Each new tale has tiny echoes and reverberations of characters from the previous stories. It's easy to imagine multiple possibilities: that all the stories happen in one fictional universe, spread wide over the world's stage. Or maybethey exist in separate parallel universes wherefate's whims take different forms. Either way, Oyeyemi's new collection left me wanting more.