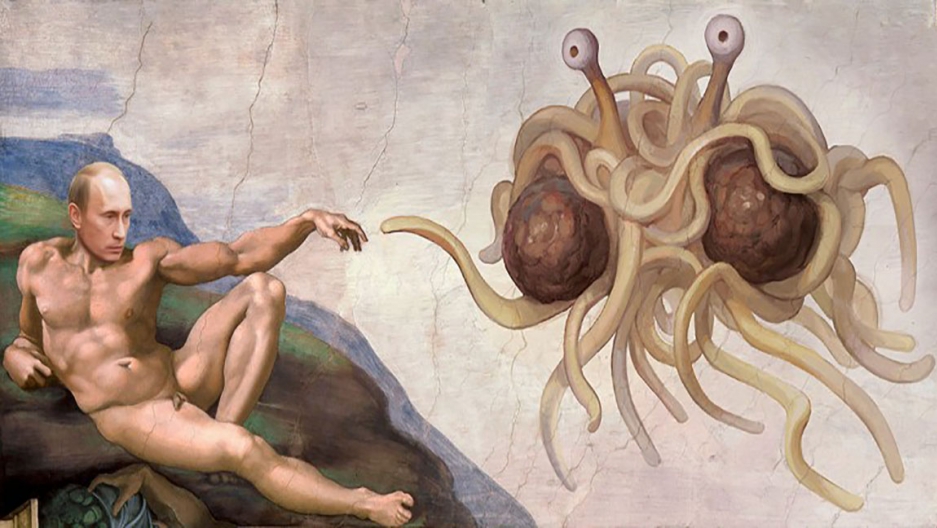 The Church of the Merciful Savior has stood in Nizhny Novgorod for more than a century. It was built to honor Tsar Alexander III’s miraculous survival in the 1888 Borski train derailment, when the tsar is said to have held a collapsed roof on his shoulders, while his family escaped the wreckage. The disaster fueled a propaganda campaign arguing that Russia’s leader had been spared by divine intervention.

Last week, the church got a new neighbor, located just around the corner: Russia’s very first Church of the Flying Spaghetti Monster. Nizhny Novgorod’s “Pastafarians” (as adherents are known) held a press conference on March 25 to announce the opening of their church, which will host public gatherings every Friday. (You can see lots of photographs of the event here.)

“We can say with absolute certainty that this is the first Flying Spaghetti Monster church in Russia. Maybe it’s the first one in the world, but that’s not something we can confirm. Usually, Pastafarians meet up on social networks, not having a special place [to gather in person],” says Dmitry Znamensky, one of the church’s leading members.

The church’s founder in Nizhny Novgorod, Mikhail Iosilevich, promised reporters that Pastafarians aren’t out to “troll” Russia’s traditional religions, insisting that his church is only looking for equal treatment and a little space of its own. His group was ready to defend its ground on opening day, too, hiring security guards to police the ceremony. Organizers said they didn’t expect any violent backlash from the city’s more traditional religious groups (singling out Orthodox Christians), but they did express concerns about the new spring season “activating” people with “various mental illnesses.”

A couple of weeks before the church formally opened, Iosilevich and some of his flock held a party on the premises, inviting a local women’s club and Nizhny Novgorod’s “Club of Liberal Tasters,” whose motto is “Freedom! Equality! Insobriety!” The party attracted about two dozen people, who lounged in IKEA furniture, drinking beer and kvass, eating crepes (“The Flying Spaghetti Monster is offended,” one woman cooking over a hot plate joked), and reading poetry.

At one point in the evening, Iosilevich stood up and explained what Pastafarianism means to him. (Apparently, he’s made the Flying Spaghetti Monster so much his own that he nearly forgot the name of the American who created the movement.) With a beer in hand, smiling as his audience listened and teased, Iosilevich said that pasta monsters, colander headgear, and a healthy serving of satire offers him, as a nonreligious person, the means to push back against Russia’s criminalization of blasphemy:

“There are different religions, and they’re all equal among each other [according to Russian law]. Everyone has the right to believe what he wants. On top of that, there is a law defending the sentiments of religious people—‘believers.’ Laws like this exist in many countries, including Russia. […] No country in the world, as far as we know, has a law defending the sentiments of nonbelievers. Everybody knows that nonbelievers don’t have any feelings, so offending them is impossible. And so there are cases all over the world where believers are protected by the law, and nonbelievers are always in the wrong. […] If nonbelievers are left defenseless, then it becomes necessary to invent their own religion, in order to level the field.”

Russia’s law prohibiting public insults to the feelings of religious people was first introduced in 2013. Anyone convicted under this law can go to prison for up to a year. Lawmakers developed the legislation in the aftermath of the Pussy Riot trial. So far, courts have convicted just one person under the law: a young man in Izhevsk, who posted a picture online that upset Muslim groups. (He was sentenced to 200 hours of community service.)

Earlier this year, a man in Stavropol named Viktor Krasnov went on trial for offending Christians by writing “There is no God” in an online forum. Before his trial began, a judge forced him to spend an entire month incarcerated at a psychiatric clinic, where doctors evaluated his sanity. Krasnov, who’s also made several anti-Jewish comments online, refuses to apologize for denying God's existence. He faces a year in prison, if found guilty.

In January 2016, Andrei Filin became the first Pastafarian in Russia to get his driver’s license photo taken with a colander on his head. The headgear, considered a mandatory attribute by the Pastafarianism community, was made out of yarn, not metal, and was knitted by Filin’s wife.