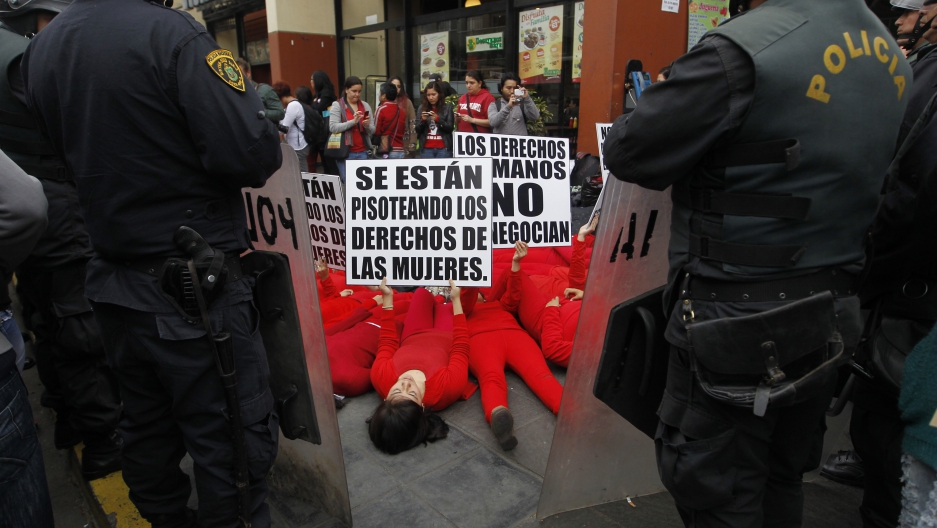 Abortion-rights activists dressed in red protest in front of the Congress in Lima, June 26, 2013.
Credit:

The issue of abortion has exploded onto Peru’s presidential campaign scene after a senior Catholic cleric told worshippers it would be a “sin” to vote for two candidates who favor a woman’s right to choose.

Javier del Rio, archbishop of the Peruvian city of Arequipa, was caught on a cellphone video on Sunday saying: “Alfredo Barnechea and Veronika Mendoza have openly said that they favor abortion and gay marriage. A Catholic cannot vote for those candidates. It’s a sin.”

The controversial remark caused an immediate firestorm, with both candidates, and many others, lambasting del Rio for seeking to meddle in politics.

Mendoza, a democratic leftist wrapping up her time in congress, responded that it was wrong to “use the pulpit for politics.” She added that the state needed to be “truly secular.”

Abortion is only allowed here in cases where the mother’s life is in danger, and a general ban on abortion doesn’t look set to change any time soon. In fact, Barnechea and Mendoza only favor lifting Peru’s restrictions on abortion in cases of rape.

Barnechea, a centrist former senior executive at the Inter-American Development Bank, responded that he would be praying for the Archbishop, adding: “I am Catholic and I believe in life, but the state and the Church are two different things.”

He went on to suggest that del Rio take a leaf out of Pope Francis’ book, reminding him that the pontiff has famously dodged invitations to condemn gays, instead asking rhetorically: “Who am I to judge?”

Others also waded in. Susana Villaran, the center-left former mayor of Lima, said the archbishop’s remarks made her “ashamed” to be Catholic.

Perhaps more surprisingly, Jaime de Althaus, a highly conservative TV anchor, warned: “The truth is that we are no longer in a religious society or state. We are in a secular state. The Church should abstain from influencing in politics. The only thing missing is for the Monsignor to threaten these two candidates with excommunication.”

Barnechea and Mendoza are engaged in a tight three-way battle with former Prime Minister Pedro Pablo Kuczynski for second place in the first-round presidential vote on April 10.

Whoever places will then face off against runaway frontrunner Keiko Fujimori, daughter of the jailed 1990s hard-right president, in a June 5 runoff vote.

It's unclear why the archbishop targeted Barnechea and Mendoza on the issue of gay rights. Although they both favor civil unions, so too does Kuczynski, a staunch free-marketer widely known in Peru as PPK. One of his key allies is Carlos Bruce, who was Peru’s first member of congress to come out as gay. And even Fujimori has said she agrees with civil unions, although not with gay couples adopting.

Archbishop del Rio is not known for hiding his political sympathies. He has been seen in photos looking very chummy with prominent members of Peru’s conservative Christian People’s Party, including congressman Juan Carlos Eguren.

Eguren provoked outrage last year when he claimed that rape does not lead to pregnancy because the victim’s body shuts down and fails to produce “any kind of lubrication.”

Much of Peru’s Catholic hierarchy is notoriously ultra-conservative. Juan Luis Cipriani, the Archbishop of Lima, is one of just two Cardinals in Opus Dei, a Catholic group that believes in a literal interpretation of the bible.

But the country was also the birthplace in the 1960s of Liberation Theology, which argues that the Church should be closer to the poor and has been labeled as Marxist by its critics.