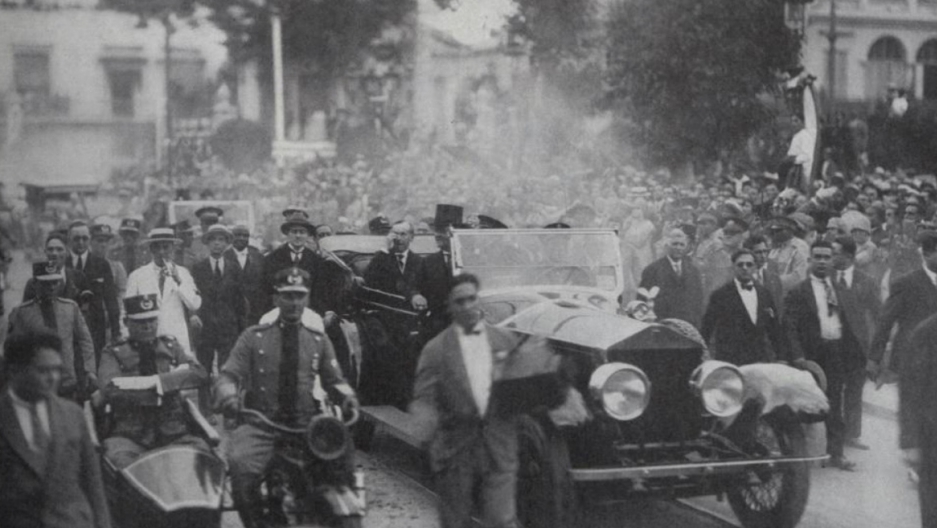 President Obama arrives in Cuba on Sunday, he'll be the first sitting US president to visit Cuba since Calvin Coolidge in 1928.

Coolidge was known as Silent Cal, a dour New Englander; an old fashioned puritan and a dedicated enforcer of Prohibition.

So what was he doing in fun-filled Havana?

He had a two-fold mission: to reset relations with Cuba, and with Latin America as a whole. Havana was hosting the triennial summit Pan-American Union, and Coolidge was to make the opening address.

Since the 1890s, Washington had used its economic and military power to re-shape the Caribbean and Central America to suit US strategic and business interests.

This had alienated all of Latin America, and Coolidge hoped to crown his presidency by assuaging that anger. In the end he failed, largely because — just before departing for Havana — he ordered a fresh US invasion of Nicaragua. It wouldn’t be until FDR announced his "good neighbor" policy that US relations with Latin America finally began to turn a corner.

But none of this is what made the trip memorable for those who were there. Those memories were largely shaped by something completely different.

The true nature of the trip was mostly kept quiet at the time, but the whistle was blown 30 years later by one of the participants: journalist Beverly Smith, Jr., who went with the presidential party as a reporter for the New York Herald Tribune. In 1958 he published a five-page story in the Saturday Evening Post.

"The 6 day junket to Cuba and return,” wrote Smith, “had in it elements of pageantry, drama, comedy and farce; of ponderous dignity and unseemly revelry; of silk-hatted diplomacy with a dash of dipsomania. It became, in its latter stages, a large scale smuggling operation. The whole show took on a special illicit zest because it was conducted under the dour, dead-pan aegis of President Coolidge — Silent Cal, Cautious Cal, austere symbol of the old Puritan virtues, staunch upholder of the Prohibition Amendment."

The party began before the travelers had even set eyes on Cuba. After a 32-hour journey on the presidential steam train from Washington, the Presidential party arrived in Key West.

When the President’s secretary announced that Cal had retired for the night, Smith wrote that “with these words, the dignity of the tour began to crack. It was as though mice had been informed that the cat was away."

The reporters’ eyes turned to the bright lights of Key West, the only town in America that seemed able to ignore the strictures of Prohibition and serve drinks openly. They all ran into town for a wild night.

“I do not remember that anybody fell down or had to be carried,” Smith wrote in the Saturday Evening Post. “But it cannot be denied that many in our party exceeded the bounds of strict sobriety.”

Writing in the more conservative age of 1958, Smith reminded his readers that in 1928, many Americans considered it their “patriotic duty” to defy Prohibition by “sluicing down any drinks within reach.”

The US Navy carried the president and his entourage of hungover journalists to Havana by sea. A huge crowd met them, perhaps 200,000 people.

A presidential motorcade slowly made its way from the dock to Cuba’s Presidential Palace, through the cheering crowds. All accounts describe how Coolidge dropped his normal reserve, and began smiling, waving and bowing in response to the warmth and enthusiasm of the crowd.

But Smith describes how Coolidge shrank back in his chair, and replaced his hat on his head, when he realized he had bowed to a very loud and cheerful “bevy of highly painted young ladies” and their madam.

Once again, as soon as it was announced that Coolidge had retired for the night, the fun began again. This time, pretty much everyone in the presidential party except the highest officials, hit the hot streets of Havana, and enjoyed their first legal drinks in years.

The Cuban government sent some police officials to make sure the Americans had a good time. "Quite a party of us trooped off with them to see the sights," says Smith, "not all of which were culturally elevating.”

There’s no evidence Coolidge himself was involved in any of these shenanigans, or was even aware of them. “Sometimes we seemed to catch a glint of sardonic humor in his eye,” wrote Smith, “but usually he preserved his famed expression of one who had been weaned on a pickle.”

It’s believed he stuck to his principles and did not touch a drop of drink while in Cuba.

There were rumors that the President hit the streets of Havana on the down-low. But Smith says that’s probably because some of the revellers told Cubans that a New England journalist — who had a passing resemblance to the President — was indeed Silent Cal. He wasn’t, but the joke led to lots of toasts and free drinks.

The final disgrace of the trip was a spontaneous smuggling effort that started on the final night of the trip after the presidential party was notified that they would not need to clear customs when they returned to the United States.

Journalists, officials and diplomats eagerly bought new suitcases or threw away their clothes, to make room for massive amounts of rum. Smith himself was able to get hold of six half-gallon jugs of Bacardi.