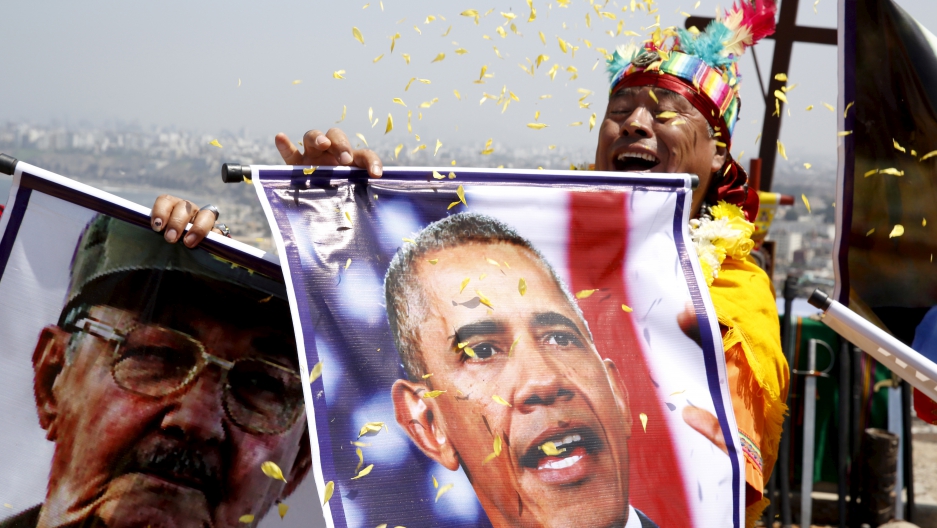 Peruvian shamans holding a poster of Cuba's President Raul Castro and US President Barack Obama perform a ritual of predictions for the new year at Morro Solar hill in Chorrillos, Lima, Peru, December 29, 2015.

When President Barack Obama arrives in Cuba this coming week, "There will be images of Cubans lining the street applauding the president of the United States in great masses," says Peter Kornbluh, director of the Cuba Documentation project at the National Security Archive.

But Kornbluh doesn't expect many concrete advances in US-Cuba relations to come from the president's trip, especially when it comes to human rights.

Kornbluh says the Cuban government mainly wants to see the US-controlled land where Guantánamo Bay Naval Base is returned to Cuban sovereignty, and "when the United States raises issues of human rights with the Cubans, the Cubans of course raise issue of the human rights of what's going on at the Guantánamo Base."

Since Obama's 2014 announcement of a move toward normalizing relations with Cuba, task forces have been set up for both countries to negotiate human rights issues — on both ends relating to treatment of imprisoned people.

Also since the 2014 announcement, 500 American businesspeople have made the pilgrimage to Cuba to try their hand at trade opportunities. But John Kavulich, president of the US-Cuba Trade and Economic Council, says they haven't been able to do much.

"Now it's a matter to see if they actually come to fruition," Kavulich says. "But what we do have is a breathtakingly large number of aspirational thinkers who go down to Cuba, see 11.3 million potential customers and believe that they have the answer. And then they're introduced to someone who knows who they need to speak with, and in the end, they come back disappointed."

Since 2014, the Obama Administration has announced a series of changes in the US-Cuba relationship, but Kavulich says the Cuban government has either remained silent or said "no" on most of those. The most recent one pertaining to trade, however, "That's a very big deal."

The US removed restrictions on Cuba's use of the US dollar for international transactions. "The question now will be how the Cuban government responds," Kavulich says.

Ultimately, Obama's efforts to rekindle relationships with this island neighbor meet with an undercurrent of resistance going back to the mid-20th Century Cuban revolution.

"Part of what President Obama's initiatives have helped to reestablish is the middle class in Cuba," Kavulich says. "And the Cuban revolution was much about ridding Cuba of its middle class."