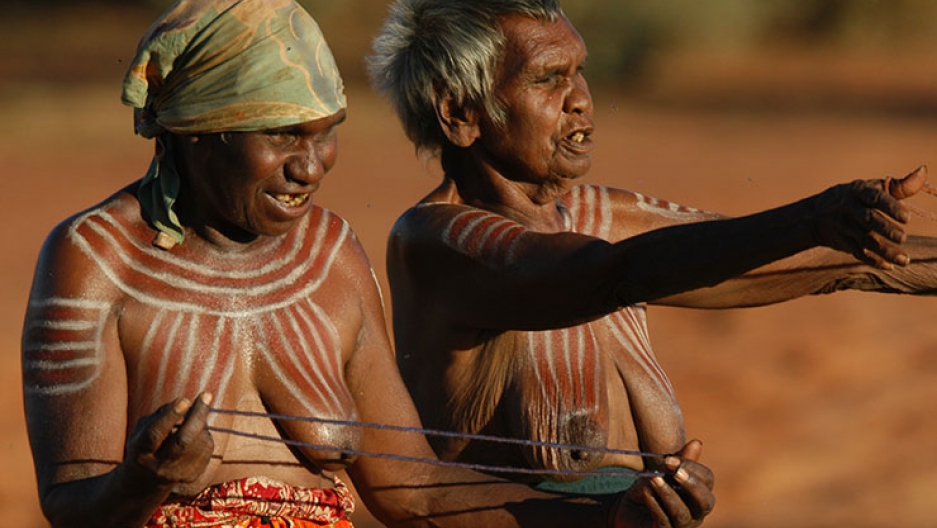 Aboriginal women from the remote Central Australian community of Ampilatwatja performing at a public ceremony in 2010 to protest against the Northern Territory intervention.

Facebook is facing scathing criticism Down Under, after suspending multiple accounts for sharing the above photo of Aboriginal women performing a public ceremony.

In a speech honoring International Women's Day, indigenous rights activist Celeste Liddle spoke about women of the central Australian Arrernte Aboriginal group, to which her family belongs, and their representation on the Internet.

When the speech was published by independent news website New Matilda, Liddle shared the article and its accompanying image (see above) on her public Facebook page, Black Feminist Ranter. Shortly thereafter, her account was suspended.

Facebook cited its “Community Standards” on nude images to justify the suspension:

"The reason we restrict the display of nudity is because some audiences within our global community may be sensitive to this type of content – particularly because of cultural background or age."

This is not the first time Celeste has found herself on the wrong side of Facebook's standards. As she explained in her Women's Day speech, she had posted a video trailer, which included naked women, “to call out Facebook’s ridiculous standards”:

"This trailer was banned by Facebook because it featured topless desert women painted up for ceremony engaging in traditional dance.

"Facebook saw these topless women as “indecent” and in violation of their no nudity clause. On hearing this, I was outraged that Arrernte woman undertaking ceremony could ever be seen in this way so I posted the trailer up on my own page stating as such."

"The only reason I can see Facebook is doing this is because the header image on my transcript, which was added by the editor of the news site and not myself, contains Aboriginal women painted up for traditional ceremonial dancing. I fully support the use of this image to accompany my keynote as it is incredibly fitting. New Matilda – the news site which published this keynote – were also temporarily locked out of Facebook when they shared it."

Over 18,200 people had signed the petition as Wednesday.

In a subsequent statement published on New Matilda, the US-based social media giant offered further elaboration on the policy, claiming to be “aware that people sometimes share content containing nudity for reasons like awareness campaigns, artistic projects or cultural investigations” but citing a need for uniformity in global policies due to the company's broad reach. Facebook encouraged users to share Liddle's speech “simply removing the image before posting it.”

Liddle is not alone

Liddle's account has been suspended at least twice for posting such images. And she is not alone:

@Utopiana @facebook @DailyMailAU @abcnews @newmatilda
Also now blocked on FB. No notice, but have shared articles with 'the photo'. #FUFB

@WgarNews @Utopiana @clementine_ford
Its a travesty. Face book is deliberately discriminating against these woman &their culture Wt insult

@Utopiana @facebook When I report hate speech, they tell me the posts do NOT breach their standards.
Funny, that.#misogyny #racism

A female musician from the US commented on a blog post by Celeste about the ban, demonstrating a positive result of the incident:

"..I would not have heard your voice -half a world away – but for the controversy, so I am grateful for it. I'm the richer for reading your words and thru them gaining a tiny, more personal window into the issues of racism and sexism as practiced in Australia. Thank you. TRULY, I thank you."

How naked is too naked?

In a parallel story comparing an Esquire article featuring a nearly-nude Kim Kardashian to the article on Liddle's speech, New Matilda suggested that Facebook does not apply equal treatment to images of women's breasts. 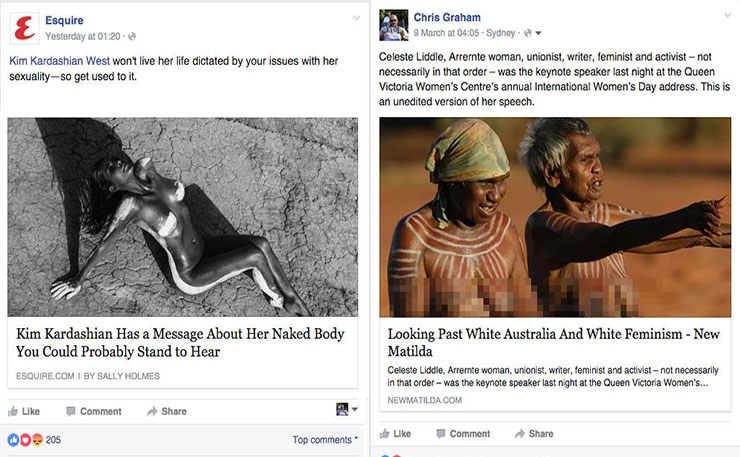 "Meanwhile, over in Hollywood, Kim Kardashian has also 'painted up' for a story published by Esquire magazine and promoted on their Facebook page. It remains there this morning, apparently without objection from the social media giant."

Among others, Esquire's page stands out as a curious example of how Facebook does (or doesn't) apply these standards evenly across its platform:

A post on the official Facebook page of Esquire men's magazine featuring the naked buttocks of model Nina Agdal.

"We remove photographs of people displaying genitals or focusing in on fully exposed buttocks. We also restrict some images of female breasts if they include the nipple, but we always allow photos of women actively engaged in breastfeeding or showing breasts with post-mastectomy scarring."

The current policy reflects some changes that have taken place in recent years, perhaps due to criticism from users. In 2013, 20,000 people signed a petition urging the platform to allow users to post photos of post-mastectomy scarring. In 2014, the company's position on images of breast feeding changed after years of controversy on the topic, and waves of users posting breast feeding images as an act of protest. These shifts in policy suggest that Facebook can bring greater sensitivity to such issues.

While it appears not to have pushed Facebook to update their policies on nude images, online conversations about the issue prove that Liddle's experience has brought greater public attention to the ways that Facebook treats nudity on its platform.