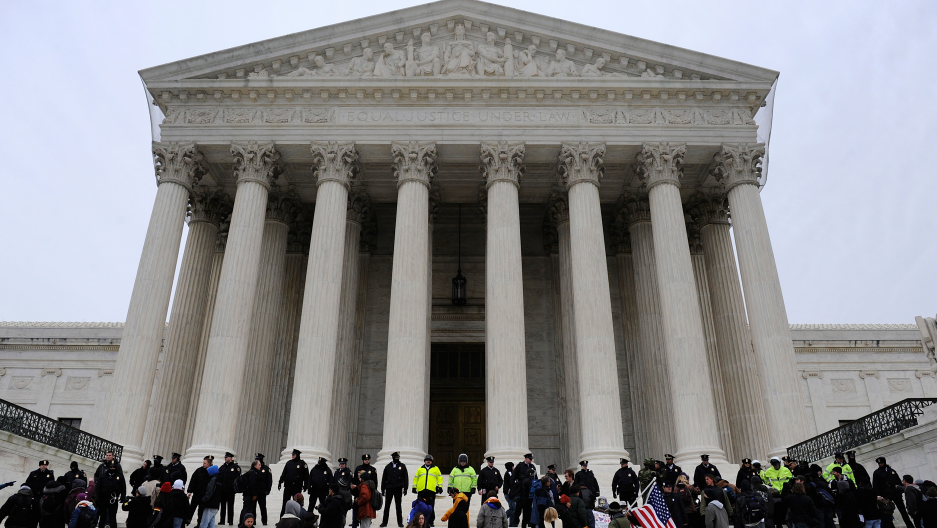 Demonstrators on the steps of the U.S. Supreme Court building, on the anniversary of the Citizens United decision, in Washington, January 20, 2012.

It’s taken a few years, but the 2010 Supreme Court case crucial to the creation of super PACs and “dark money” nonprofits has entered the political zeitgeist. More and more Americans are seeing and feeling the effect of that momentous decision, and they aren’t happy about it — regardless of party affiliation.

In September, a Bloomberg poll about the facts behind the Citizens United v. Federal Election Commission decision, found that 80 percent of Republicans and 83 percent of Democrats opposed it.

Reformers offer two general approaches to killing Citizens United: the Supreme Court could reverse itself or Congress and the states could amend the U.S. Constitution.

Some say the former route, particularly given the death of Supreme Court Justice Antonin Scalia, is the logical route.  Speculation rages about who President Barack Obama will nominate to the court. And the Republican-controlled Senate, led by Majority Leader Mitch McConnell, says it will not consider any Obama nominee for confirmation; that this choice should be reserved for the next president.

Others are rallying behind an amendment, a more difficult but potentially ironclad solution.

Some support both approaches.

What’s it all about?

In a nutshell, the 5-4 Citizens United decision allowed corporations (including certain nonprofit corporations) and labor unions to expand their role in political campaigns.

The case did not affect contributions to a candidate’s actual campaign. It is still illegal for companies and labor unions to give money directly to candidates for federal office.

What changed: many outside, non-candidate organizations could now raise and spend unlimited amounts of money to support or oppose a candidate.

The high court reasoned that as long as these unlimited funds aren’t spent in coordination (a crucial and controversial distinction) with the actual campaign, they do not “give rise to corruption or the appearance of corruption.” Thus, they would be legal from that point forward.

Also in 2010, a separate, lower court case — SpeechNow.org v. FEC — made possible the entities known as super PACs. With Citizens United as a precedent, the U.S. Court of Appeals for the D.C. Circuit ruled that theoretically independent spending groups could accept unlimited amounts of money from corporations, unions and even individuals with fat bankrolls.

Flash ahead to the 2016 presidential election. The legal seeds sewn in 2010 have germinated into super PACs such as Right to Rise USA, which former Florida Gov. Jeb Bush helped create and ultimately raised more than $100 million to support one person: Bush. But Right to Rise USA asserted it was not “coordinating” with the Bush campaign.

The Citizens United decision also paved the way for the creation of so-called “dark money” groups.

As tax-advantaged “social welfare” organizations or business leagues, these nonprofits can function the same way as super PACs do as long as election activity is not their primary activity.

Deciding whether these groups are really primarily about promoting social welfare, rather than politics, has been the source of considerable controversy.

This distinction is important — unlike super PACs, these “social welfare” groups do not have to report who funds them, allowing donors to avoid publicity. And both the Internal Revenue Service and Federal Election Commission, which have some jurisdiction over politically active nonprofits, have all but declined to pursue groups that might be playing politics too much.

What does it all mean for our political system?

“We now live in a world with unlimited money,” laments Paul S. Ryan, deputy executive director and attorney with the Campaign Legal Center, which is working to undo the effects of the decision. “And we do have corruption, and we don’t have disclosure.”

Don’t look for much change anytime soon. Passing a constitutional amendment is a daunting assignment.  A two-thirds vote of approval would be required in both the U.S. House and U.S. Senate, which often can’t achieve simple majorities on seemingly perfunctory matters. And then, three-fourths (38) of the nation’s states would have to ratify an amendment.

The last time this occurred it took 203 years. The 27th Amendment, which was introduced in 1789, wasn't approved until 1992. It prohibits raises for members of Congress from going into effect until the start of the next term.

The alternative would be a constitutional convention, which is even less likely. Two-thirds of the states would have to demand it. It's happened exactly once in U.S. history — and that was the first one that created the Constitution.

Despite the high bar, Scott Swenson, spokesman for good government group Common Cause, says it could happen.

“It is the one thing that Americans agree on left, right and center,” he said. “That this is one of the worst Supreme Court decisions in history and it will be overturned. What we need is a Congress that will send it to the states.”

Ryan, however, is skeptical.

“We’re not advocates of the amendment approach for a number of reasons,” he said.

To date, the proposed “Democracy for All Amendment” achieved the most support among anti-Citizens United amendment proposals.

“It’s really tough to draft,” Ryan said of an amendment. “The purpose, in effect, is to regulate and restrict private behavior. That’s only happened once, with the Prohibition amendment. You know how that worked out.”

But there are those who say an amendment is the better way to go, like Jeff Clements, author of “Corporations are Not People: Reclaiming Democracy from Big Money and Global Corporations.”

“Constitutional amendments — not new Supreme Court justices — ended slavery, guaranteed equal protection and voting rights regardless of race, won the vote for women, enabled a progressive income tax, ended the poll tax barrier to voting and prevented states from depriving Americans over 18 years old the right to vote based on age,” he wrote in The Hill newspaper last month.

Others support the other option — getting another case to the Supreme Court that might prompt a reversal of Citizens United.

An amendment, says law professor and campaign finance expert Rick Hasen of the University of California at Irvine, isn’t realistic, at least not in the current environment.

“It’s a political non-starter,” he said, pointing to the Democracy for All Amendment, which did not receive a single Republican vote. "If you really want to get rid of super PACs, we would need to somehow change the understanding of the First Amendment.”

To do that, the 1976 decision Buckley v. Valeo, in which the Supreme Court basically said political spending is akin to free speech, would need revisiting.

“Certain but not all spending limits have the potential to be upheld as constitutional and strike the right balance with a liberal Supreme Court,” Hasen said.

Don't miss another Politics investigation: Sign up for the Center for Public Integrity's Watchdog email.

With Scalia’s death, there’s a chance the ideological balance of the court may shift. The conservative justice voted in the majority in the Citizens United case, and was not a friend of the campaign finance reform community, though he was bullish on disclosure of donors.

So the selection of the next justice is crucial. If the Senate confirms someone who opposes Citizens United — either a nominee from Obama or his White House successor — there’s a real possibility the high court might reverse itself.

First, it would require a lawsuit of some sort that would need to wind its way through the legal system.

A state or even a city could pass a new law banning corporate contributions to outside groups outright. Or enforce such a law that’s already on the books. Or pass a ballot initiative.

In the current atmosphere, such a law would inevitably be challenged — and such a challenge could eventually make its way to the US Supreme Court. But even if this were to happen, say campaign finance experts, the process would still take years.

Nick Penniman, executive director of campaign finance reform group Issue One, says there is “nothing in the pipeline” as far as cases but that there could be a reversal “within five or six years.”

Short of a reversal, there are incremental reforms that could make a difference. Advocates are, for example, pushing for public financing of campaigns and more robust disclosure of contributions.

Even if Citizens United is reversed, however, that won’t magically create a system that everyone is happy with, says David Donnelly of Every Voice, a campaign finance reform advocate. The nation still ends up with the system that existed in 2009, which was “not working very well.”

John Dunbar is political editor and deputy executive editor for the Center for Public Integrity. This story is part of a collaboration with Reveal.

This story is part of Politics. Campaign donations, lobbying and influence in government and reports on the special interests that are funding elections and buying power. Click here to read more stories in this topic.