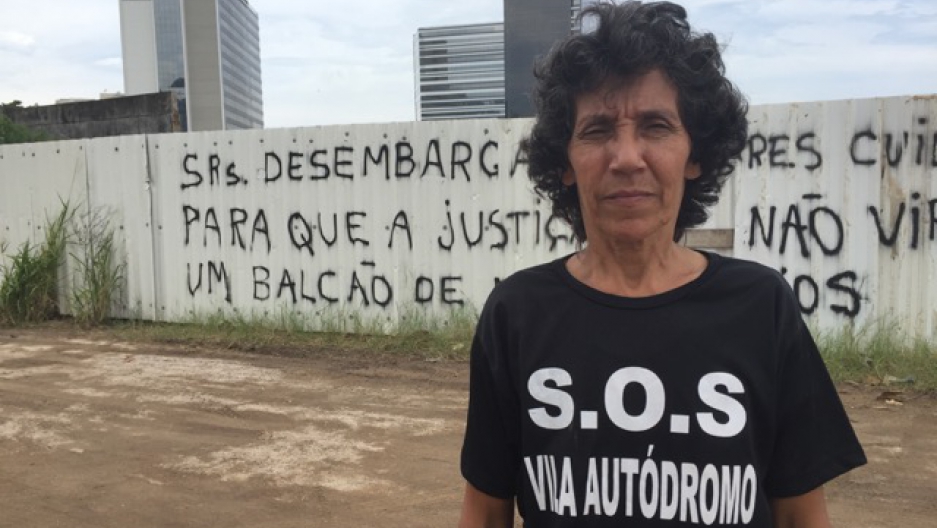 Activist and long-time Vila Autodromo resident Maria da Penha stands near her house in the Rio favela. Her house was flattened this morning to make way for Rio 2016 Olympics construction.

Just like that, on Tuesday morning, construction workers demolished the home of Maria da Penha, an activist and resident of the Vila Autodromo favela in Rio de Janeiro.

Da Penha’s home, like that of hundreds of other residents, was razed to make way for construction of the Rio’s Olympic Park, which will serve as the de facto headquarters of the 2016 Summer Olympic Games.

Da Penha was one of a few dozen people still clinging to some semblance of their old lives in Vila Autodromo, a community that once housed more than 600 people. Most of the residents left months ago after Rio’s city government offered them new apartments or cash buyouts in lieu of their land. Recently, the government seized the land, using eminent domain, and workers have been demolishing the remaining homes over the past few months.

Interviewed in front of her home last week, Da Penha, who had lived in the neighborhood for 23 years, said that her struggle was not about money, but about fundamental human rights.

“I think all citizens need to be respected,” she said. “Sadly, our society, our government, a lot of the time doesn't respect the rights of humble people, of people who live in communities (favelas).”

Rio’s city government declined a request for an interview. In a statement, a spokesperson wrote that the city constructed a new housing block for the residents of Vila Autodromo less than a mile away from the favela.

“The negotiation process with the residents of Vila Autodromo has always been transparent,” the statement reads.

Da Penha said the city government has been far from clear about what will happen to the remaining residents of Vila Autodromo. She is hoping the city will preserve part of the land for homes for the remaining residents, and she and other activists have worked with local universities to draw up plans for how such a project might take shape.

The city has been receptive to those plans, she said, but when it comes to acting on them, officials have dragged their feet.

“When they (government officials) do an interview, they say that everything's great. But who's it good for? Just for them!” Da Penha said. “For us humble people, who live in communities (favelas), nothing's good.”