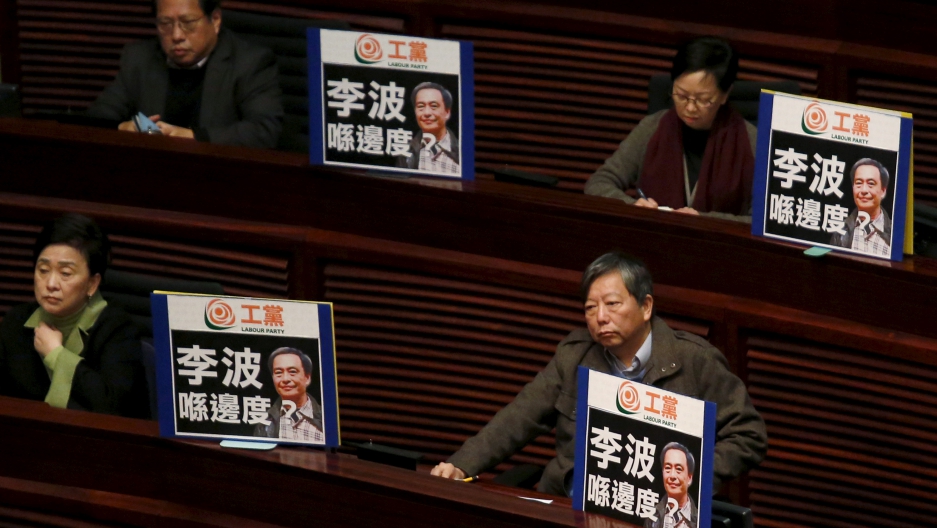 Hong Kong lawmakers protesting the disappearance of Lee Bo, one of the booksellers

Five booksellers who disappeared from Hong Kong last year have re-surfaced in detention in mainland China. They appeared in interviews on TV in which they confessed to crimes and "mistakes."

“We wish we knew exactly where they were,” says journalist Isaac Stone Fish, who covers China for Foreign Policy magazine. He says the confessions “looked coerced.”

Human rights groups in Hong Kong and around the world are deeply alarmed by the cases of these men.

In their TV appearances, the men all said they were picked up inside China. Their supporters claim they were abducted by Chinese agents from Hong Kong soil and in one case, possibly from Thailand.

Hong Kong may be part of China, but the territory retains sovereignty in judicial terms, under the "One Country, Two Systems" agreement which has governed the relationship between Beijing and Hong Kong since decolonization by Britain. Lawmakers and activists believe that sovereignty, and consequently human rights, are under threat from the case of these booksellers.

The bookstore that these men work for is famous for stocking titles on the private lives and power struggles of China’s ruling elite. The books can be scandalous and salacious, and some are likely exaggerated or false.

The motivation behind the detentions is clear, says Stone Fish. “Usually in a case like this, Beijing is making an example. ... There’s an expression in China that you kill the chicken to scare the monkeys. … The idea is that by cracking down on them that’s going to send a message to other people who might want to write and publish salacious — and in many cases probably untrue — details about the private lives of Chinese leaders and well-connected Chinese people.”

“I think Beijing likes to see them sort of the same way that we see drug smugglers in Mexico,” says Stone Fish, “that they’re bringing poisonous material into their country. And that even though it’s a different system, because they’re harming China, they should be stopped.”

Two of the detainees have foreign passports: one is Swedish and one is British.  And that has a lot of people worried, says Stone Fish “about the ever-increasing ambit of Chinese law and Chinese enforcement, that even if someone is no longer bound by Chinese laws, Beijing will still try to grab them for something like this.”