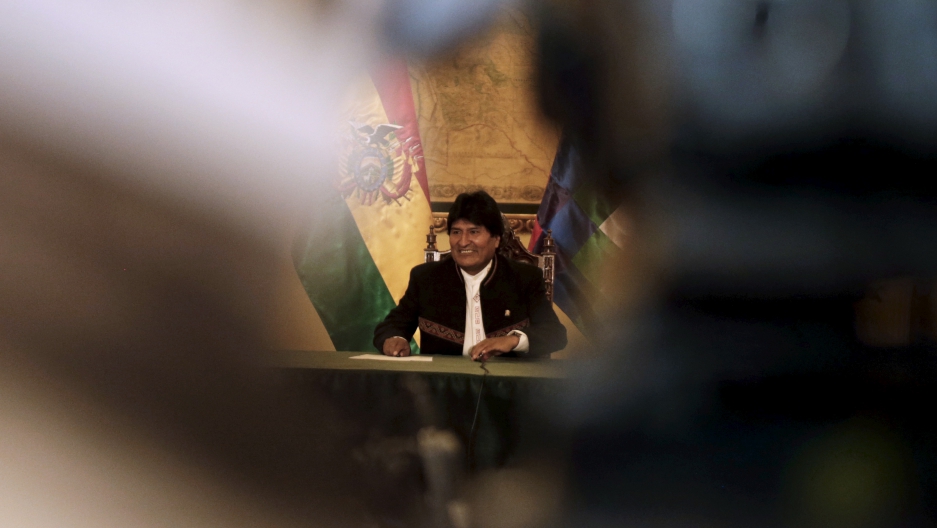 President Evo Morales holds a news conference at the presidential palace in La Paz, Bolivia on Feb. 22, 2016. Morales asked Bolivians on Monday to wait "calmly" for the official result of Sunday's referendum on whether he should be allowed to run for re-election, emphasizing that the outcome could still go either way.

Evo Morales’ bid to be president of Bolivia for nearly 20 uninterrupted years has failed.

With more than 99 percent of the votes counted from Sunday’s referendum on allowing presidents to be re-elected twice consecutively, the “No” campaign had garnered 51.3 percent. The results mark the first time the self-described socialist has lost at the ballot box since assuming power in January 2006.

In the last 10 years Morales — an indigenous Aymara who used to grow coca and who has long had an antagonistic relationship with Washington — won re-election twice, in 2009 and 2014.

He also won two previous referendums, both in 2008: one to see whether he should continue in office, and another to approve the same constitution that he now wants to amend.

That constitution allows presidents to be re-elected twice, once straight after their first term and a second time after they sit out a term. The 56-year-old was only able to run in 2014 after he argued — controversially but also successfully — that his first election did not count because it came under a previous constitution.

Morales conceded defeat on Wednesday. The president, who won't leave office for another several years, vowed to keep working on behalf of the poor. "We may have lost a battle, but not the war," he said. Morales has also railed against the role played by social media in the election, an example of the supposed authoritarianism that his critics often complain about.

“Perhaps in the future, it will be important to debate this issue of the social media,” he said Monday. “In some countries, with bad information, they bring down governments.”

On Wednesday, he declared that "some media outlets fulfilled the interests of political parties."

That is partly thanks to his personal story, as the first-ever indigenous leader in a country where the majority identifies as native, and where many speak Amerindian languages such as Aymara, Quechua or Guarani as their mother tongue.

But it is also thanks to policies that have helped Bolivia’s national economy grow steadily, seeing the poverty rate fall from 60 percent when Morales took power to just under 40 percent at the start of 2014.

They have included renationalizing the country’s oil and gas industry from foreign corporations that were widely viewed as bloodsuckers within Bolivia — and then using the additional revenues for heavy social spending, in a country that was among the poorest in the Western Hemisphere.

But despite all that, the unmarried Morales has been hurt by an alleged influence-peddling scandal in which it emerged that his ex-girlfriend  was an executive at CAMC, a Chinese firm that has won contracts worth $576 million from the Bolivian state.

Critics have also long accused him of refusing to listen to critical voices and, ironically, riding roughshod over local communities and the environment.

More from GlobalPost: The left vs. the indigenous of Latin America

Some are viewing Morales’ likely defeat as part of a regional trend sweeping back the “pink tide.” A center-right government just took power from the left in Argentina, while Venezuela, once the poster child for Latin American socialism, has run into an economic crisis so deep that it is on the verge of becoming a failed state.

“This seems like an unambiguously good thing for Bolivia, perhaps obliging Evo and [Vice President Alvaro] Garcia Linera to rebuild their ties to social movements, and in any case shifting course before ending up as badly as some of their allies,” Mark Healey, a professor of Latin American history at the University of Connecticut, told GlobalPost.

But Ludwig Valverde, chairman of the Association of Political Scientists of La Paz, suggested that although Bolivians do not want Morales to stay in power indefinitely, they might choose a leftist successor.

“This is not about right and left,” he said. “Many of the most critical voices against Morales come from the left. This is about how the state operates. Bolivians want a responsive, transparent state and they don’t want a president who stays in power endlessly.”

This story was cross-posted by our partners at Global Post.