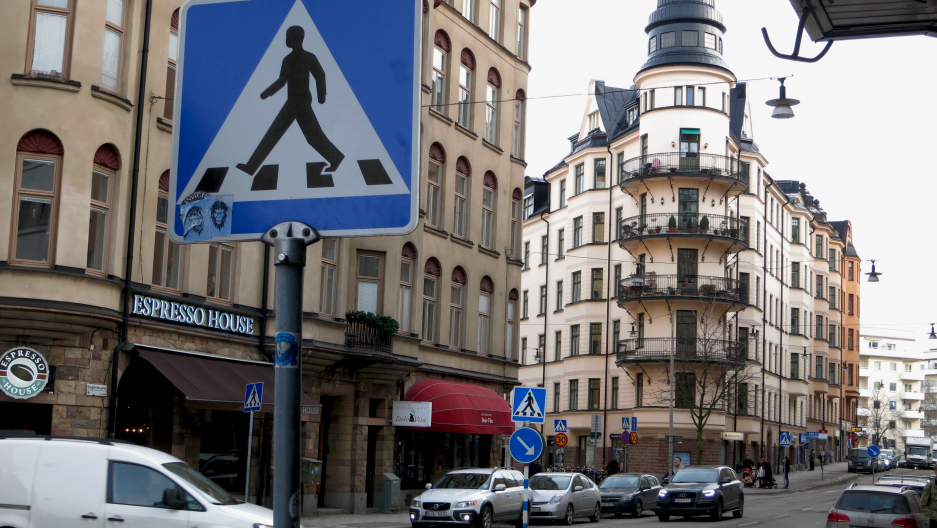 Streets signs for pedestrian crossings are ample in Stockholm.

Following that belief, Swedish Transport planners have squarely put the responsibility for road safety on designers.

It's working. Today, Sweden has among the safest streets on the planet.

Worldwide, more than 1.2 million people die each in traffic crashes. The World Health Organization predicts that figure could triple by the year 2030. But, as Sweden has demonstrated, the trend is reversible. Cities across the US. and the globe, are adopting Sweden’s model for road safety. It’s called “Vision Zero” — the idea that no loss of life on the roads is acceptable. It became a national policy in 1997, passed by the Swedish parliament.

Most of the changes are actually quite simple, explains Matts-Åke Belin, who directs the Vision Zero Academy for the government. He said consider a four-lane intersection.

“The traditional approach to solve a safety problem in that intersection is to put up a traffic light,” says Belin. “And when you do that, you will reduce the crashes.”

But, when somebody runs a red light, we all know those high-speed crashes don’t end well. Belin says there’s an alternative: a traffic circle, or roundabout.

“The crashes might increase a little bit because it becomes a little bit more difficult to drive in a roundabout, but those (accidents) that happen will be less severe,” says Belin. 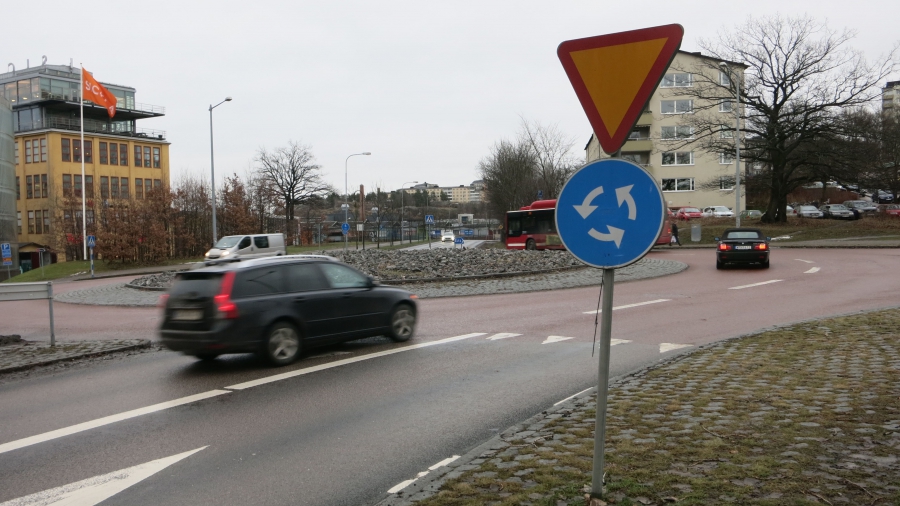 Roundabouts in Stockholm are used to minimize head-on collisions.

In essence, they’re making a trade: allowing more minor accidents as people get used to roundabouts in exchange for fewer deaths on the road. Again, they’re putting the onus on the road designer to keep people safe on the roads.

In a video from the country’s Vision Zero Imitative, Claes Tingvall, a director of traffic safety for the Swedish National Road Administration said, “If you take a nuclear power station, if you take aviation, if you take a rail system — all of them are based on that they should be operated by people who can make a mistake.” So why isn't this precautionary approach applied to roads too, posits the video.

There are lots of other small changes in Sweden's urban areas to keep people safe. For example, cars can only travel 30 kilometers per hour (about 19 miles per hour). Belin says this dramatically lowers the risk of fatalities if unprotected pedestrians get hit.

Stockholm is filled with speed bumps and raised cross walks. There are signs everywhere, and I mean everywhere, alerting motorists where walkers and cyclists might be. It works. Cars go slow.

As for cyclists, they often get their own physically-separate lane.

I went for a 10-mile ride with Riggert Anderson and asked if he ever feels at risk when he rides.

What else needs to be said?

By the numbers, Anderson’s attitude is justified — Stockholm has the safest roads of any major city in the world. So, it’s not surprising that cities everywhere are trying to replicate the Swedish model. My city, Boston, adopted it last year.

“I feel it’s an excellent start,” said Brendan Kearney with the group Walk Boston. “The vision is there. And there are definitely people working hard to make this a reality.”

I met him along with Stacy Thompson, deputy director with LiveableStreets Alliance, a group that seeks to balance walking, biking, and public transport with cars. She herself doesn’t cycle in Boston though; she doesn’t think it’s safe enough.

“And I’m clear about that, because I’m working to make it safe enough to feel comfortable enough to bike,” said Thompson.

In the chicken and egg equation, Thompson said you need to build infrastructure before you get more cyclists.

What does Boston have to learn? It already is one of the safest major cities in the US. Still, you’re about three times more likely to be killed on the roads in Boston — walking, cycling or traveling in a car — than in Stockholm.

I spoke with Thompson and Kearney at the corner of Massachusetts Avenue and Beacon Street, a notoriously dangerous spot. A young surgeon was killed on a bicycle here last year when a truck turned into her. The city made some quick changes like placing flexible posts in the ground to mark off the bike lane.  Kearney says the city can do more, like changing the timing on traffic signals.

“There are no leading pedestrian indicators, meaning the walk signal comes on in advance of the traffic, which would basically let people walking and biking be halfway out in the intersection, give more visibility to any turning vehicles,” said Kearney, who was frustrated it hasn’t happened yet.

It’s s a low-cost idea the city says it plans to do. But the city’s Vision Zero plan is a 15-year strategy. Problems won’t get solved overnight.

A “ghost bike” memorial in Boston marks where surgeon Anita Kurmann was struck and killed by a truck.

Making cars wait a few seconds so pedestrians and cyclists can get a head start, that’s small potatoes. For the long-term, Stacy Thompson says city planners need to take space away from cars, a costly proposition.

But that won’t be an easy sell for drivers — sharing more of the road and giving up their dominant status on streets.

Re-designing urban streets will be costly. But getting buy-in from drivers ... that might be the bigger challenge implementing a Swedish-style safety program in Boston. Or anywhere. 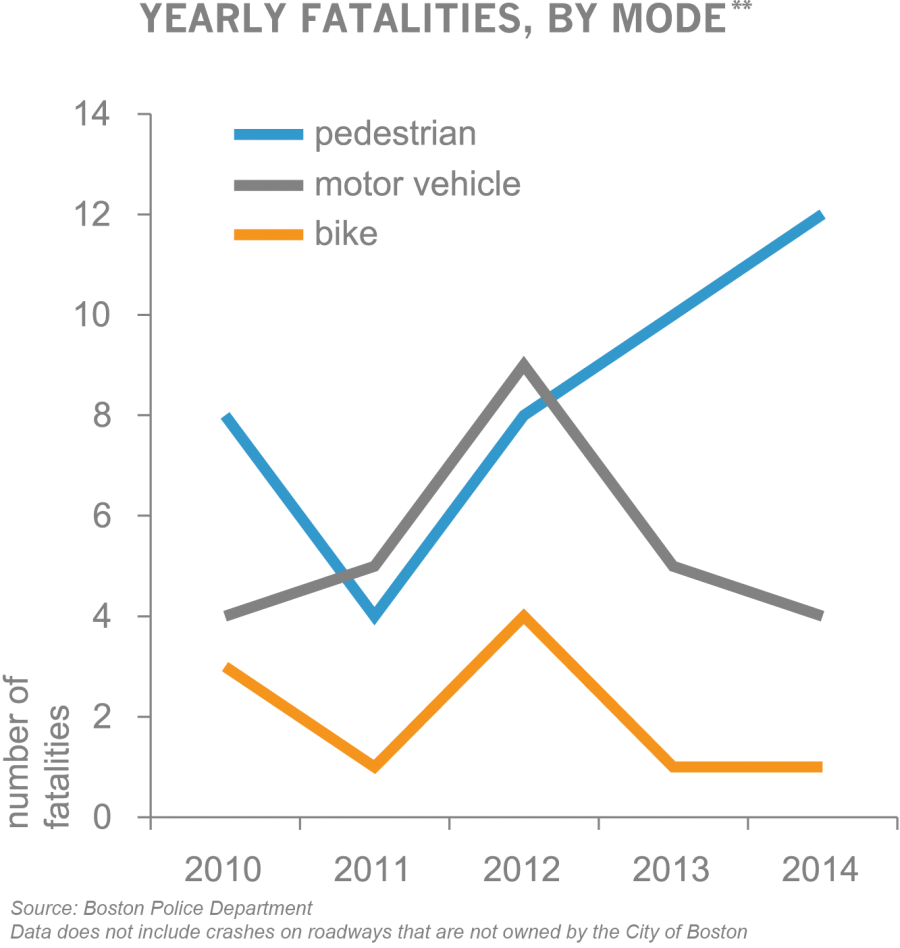