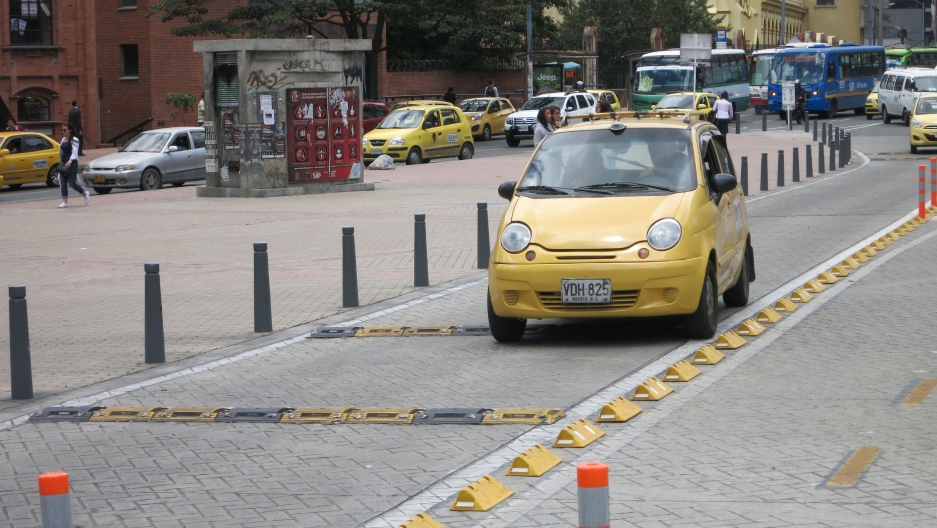 Bogotá has taken a number of design steps to slow cars down and keep them separate from pedestrians and cyclists.

About 1.25 million people die each year in traffic crashes worldwide. If actions aren't taken, that figure could rise — making traffic accidents the seventh leading cause of death worldwide, with most of those fatalities occuring in poor and middle income countries.

Here's the good news: The number of fatalities appears to have hit a plauteau. And in places like Bogotá, city leaders have shown the upward trend can be radically reversed.

Two decades ago, this seemed highly implausible — Bogotá had some of the most unsafe streets in the world. Then city leaders adopted a somewhat radical philosophy: “What matters are the people, not the cars,” says transportation planner Dario Hidalgo, who was part of the team that helped re-shape the city.

City leaders invested in a mass transit system called the TransMilenio, a bus rapid transit that operates like an above-ground subway. The city installed super-wide sidewalks and one of the world’s most extensive networks of bike paths. In the mid 1990s, Mayor Antanas Mockus hired mimes to police traffic, betting that Colombians would respond to public shaming. (They did.)

Today, you can see the city’s prioritization of pedestrians at many of the city’s zebra crossings, painted blue, green, yellow and red.

“It’s trying to make the zebra much more visible and showing much more respect for the pedestrians,” says Hidalgo. 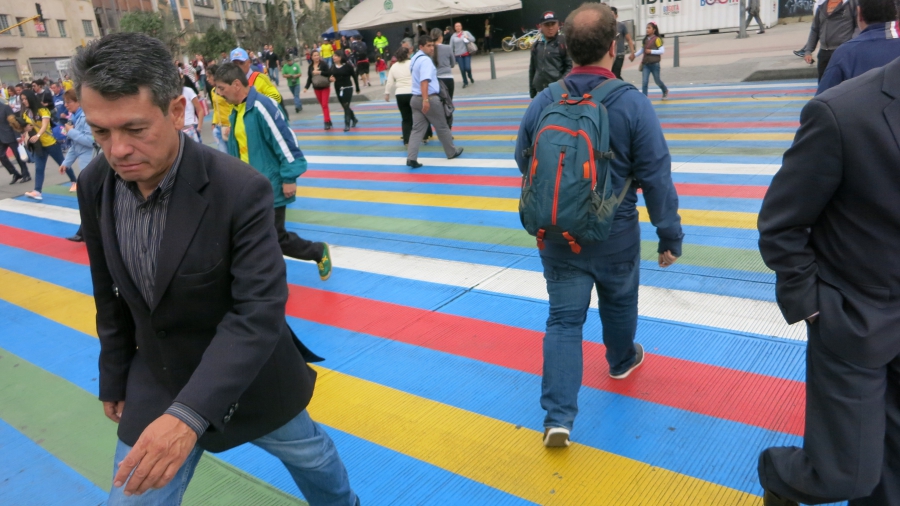 Small changes like colorfully-painted, extra-wide crossing zebras have made Bogotá a much safer city.

Walking and driving around Bogotá just feels safer, and less chaotic, than other Latin American cities I’ve visited in Mexico and Brazil. Many Bogotános I met disagreed with my assessment, complaining about the crazy driving there, but the data shows my perceptions are accurate. Bogotá cut fatal traffic accidents by more than half  from 1993 to 2003, and traffic deaths in Colombia overall continue to drop modestly, bucking the trend in Latin America.

For a US comparison, the odds of getting killed on the streets in Bogotá are slightly greater than in Los Angeles, the second most dangerous major US city for road fatalities. (Atlanta ranks highest among US cities for traffic deaths, per capita.)

Still, none of this is to say Bogotá is a nirvana, far from it — the city could do a lot better. Being on par with the most unsafe cities in the US might not be cause for celebration.

In Bogotá, roughly 600 people are killed on the roads annually. I asked Liliana Bohorquez, the city’s director for road safety, her goal. She says the city has a vision of zero traffic fatalities.

That might sound crazy. But it’s an aspirational goal inspired by Sweden’s example. In 1997, the Swedish Parliament passed its “Vision Zero” law, declaring that they will not accept any people getting killed or seriously injured.  Stockholm now has the safest streets in the world, and Sweden is considered the world’s safest country.

Carsten Wass, a Danish safety consultant with the firm ROSACO, says if you want a truly safe city, you have to be willing to annoy some car owners. After all, it’s cars that kill people.

“You need to make it expensive and difficult to use a car,” says Wass.

Bogotá has done some of that. Residents are only allowed to drive in the city every other day during the morning and evening rush hours, according to their license plate number. And the city took away tens of thousands of informal parking spots, physically blocking vehicles from parking on sidewalks. Motorists were irate. 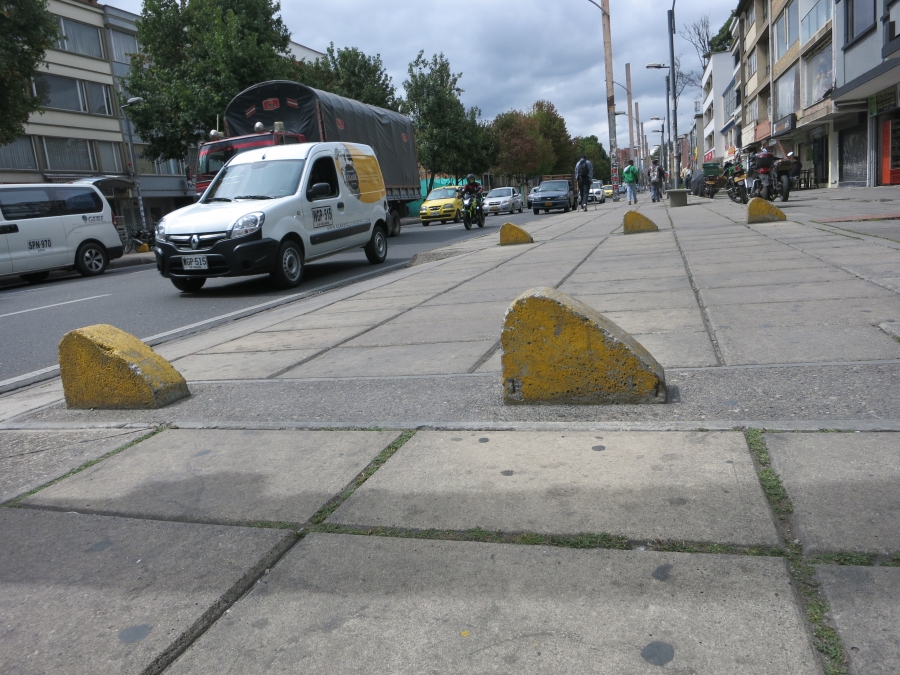 Traffic barriers and bollards were installed throughout Bogotá to prevent cars from parking on city sidewalks.

Wass, who was doing some consulting in Bogotá, encourages Bogotá to go further — hit people in the wallet for the privilege of driving downtown.

“This has been very successful in Copenhagen, for example, where we pay up to $8 per hour for parking in the city center.”

Bogotá recently invited other road safety experts from across the globe for advice. Ben Welle with the World Resources Institute’s Ross Center for Sustainable Cities addressed a room of Bogotá’s city leaders, talking about why nearly a quarter of road fatalities involve pedestrians.

“It’s a simple issue of physics, but the faster cars are going, the more likely it is that a pedestrian will die. That number generally starts increasing rapidly after 30 km per hour,” Welle said to a crowded auditorium.

It’s not just a matter of posting lower speed limits though — you have to force cars to slow down, says Welle. We went for a walk through Bogotá’s business district, as cars zoomed past us at a crosswalk.

“One thing you can do to slow vehicles before they come to that crossing is to put a speed hump,” says Welle.

That may sound like an obvious idea, and it is. But effective. The Romans used speed humps to slow down chariots.

Welle advocates for other design changes like artificial zig-zags in roads and traffic circles to slow motorists. Cultural changes — like encouraging people to wear a seatbelt — take time. But infrastructure changes yield results immediately, says Welle, “because the physical design of the road is making people behave better.”

Physical design can also make people behave differently. Bogotá has 250 miles of bike lanes, and an estimated 6 percent of Bogotános cycle to work, double the number from a decade ago.

I went for a bike ride during rush hour with Juan Manuel Prado of Despacio, a group that advocates for more liveable cities. We rode on the sidewalk, separate from pedestrians. A few walkers invaded our space, but still, I thought it was great, until, that is, Prado showed me a design flaw as we entered a cross walk.

Juan Manuel Prado with Despacio, a group that advocates for more liveable cities.

“It’s very difficult for drivers of cars to see you,” says Prado.

I worried that if a car had made a quick right turn, we would have been in big trouble.

Prado confirmed my fears: “Yeah, we need to do something about it.”

Prado next took me to a bike lane built in the center of a street, physically separated from both cars and pedestrians. This was fantastic, no doubt about it. The city doesn’t have too many lanes like this though.

“I think it’s not realistic because, in terms of money, it’s very expensive to build these types of things,” Prado says.

It’s also expensive to have accidents on the road though — costs from injuries, hospitalizations and fatalities add up. Research suggests that traffic crashes can cost low and middle income countries 3 to 5 percent of their economic output. In Bogotá, that would translate to perhaps $6 billion to $10 billion lost annually — a lot of money that could be put toward building safer road infrastructure.

Bogotá is also partnering with Bloomberg Philanthropies, which selected 10 low and middle income cities to be part of its five-year Initiative for Global Road Safety. Other cities receiving help include Bangkok, Accra, and Mumbai.

“Our program is focused on road safety,” says Kelly Henning, program lead for public health at Bloomberg Philanthropies. “And that’s really about trying to get helmets on heads of people on motorcycles, reducing speeds, reducing or eliminating drunk driving, and making sure that people wear seat belts and have child restraints in their cars.”

Just last month, Bogotá began broadcasting a commercial aimed at preventing drunk driving. It was produced by the city of Bogotá with help from The World Lung Foundation, a Bloomberg Philanthropies partner. The ad was adopted from one originally made in Northern Island.

The commercial is only a minute long, but it sends a chilling and unsettling message. And that’s why Bogotá’s civic leaders are broadcasting it.

A previous version version of this story misspelled Carsten Wass' name. We regret this error.