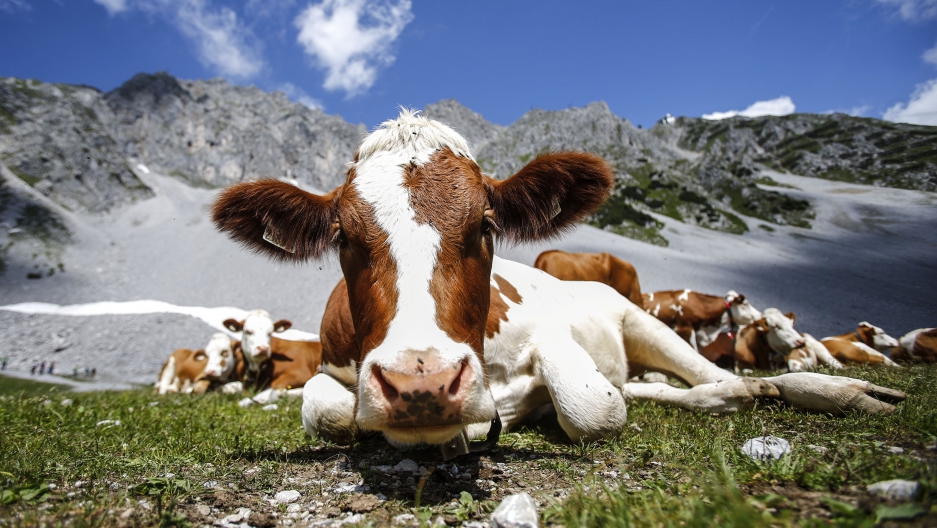 Cows lie in grass in front of Hafelekar mountain on a summer day in Innsbruck, Austria on July 25, 2013.
Credit: Dominic Ebenbichler
Share

"Reductions, by 50 percent or more, in ruminant meat (beef and mutton) consumption are, most likely, unavoidable if the EU targets are to be met," according to the findings published in the Food Policy journal.

But Stefan Wirsenius, one of the authors of the study written by researchers from Chalmers University of Technology and the SP Technical Research Institute, said there was no need to give up meat completely. "Poultry and pork cause quite low emissions," he said.

Dairy products are also problematic, according to the study. Producing one kilogram (pound) of protein from dairy results in emissions four times greater than for an equivalent amount of poultry.

"EU and US consumption of cheese and other dairy products is among the highest in the world. If we were to replace some of the dairy products with vegetable products, such as oat milk, we would have a better chance of meeting our climate targets," said Wirsenius.

The authors also explored how improvements in agricultural techniques could reduce emissions.

"Emissions from manure storage can all but be eliminated if the facilities are covered and waste gases are flared (burned off)," according to lead author David Bryngelsson.

But reducing the amount of food that has been thrown away only cuts emissions from food and agriculture from between five and 10 percent, according to the study.

The report, "How Can The EU Climate Targets Be Met? A Combined Analysis of Technological and Demand-Side Changes In Food and Agriculture," was published in the February issue of Food Policy journal.

The European Union would like to reduce greenhouse gas emissions by 20 percent by 2020, when compared with levels from 1990.