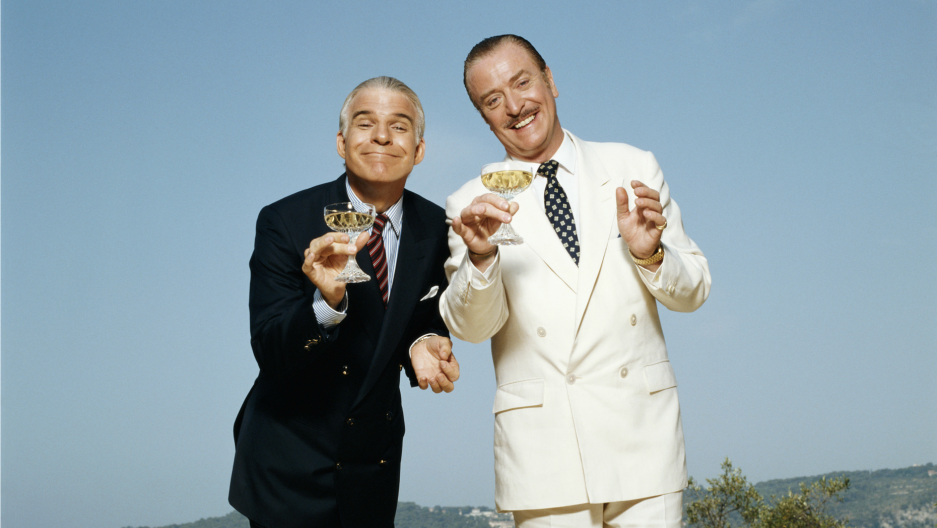 Steve Martin is a beloved goofball, but for most of my life I never really took to him. It wasn't so much that I disliked him, as much as I felt deeply ambivalent about his humor.

Until I saw "Dirty Rotten Scoundrels."

It's the film that made me fall in love with Steve Martin and added lines to my everyday vocabulary such as "May I take your trident, sir?" and "Why is the cork on the fork?" I could link to those clips, but really you should just spend two hours watching Michael Caine and Steve Martin trying to out-charm each other on the FrenchRiviera. Caine plays con-man-about-townLawrence Jamieson,who lives a sophisticatedlife conning wealthy vacationers to subsidize his villa. Martin is cast as cheap American hustler Freddy Benson,who is happy scraping the bottom of the barrel by tricking strangersinto buying him a meal. Worried that Benson is the mysterious "Jackal" character who has been poaching his marks, Jamieson takes Freddy under his wing to teach him the refined approach to separating women from their money --- on the condition that only one of them can stay in the town ofBeaumont-sur-Mer.

As much fun as a seaside caper can be, the best part of this movie is Caine's restrained elegance reflected in Martin's slapstick antics. The very best part of the movie comes when Jamieson forces Benson to pretend to be his developmentally delayed brother Ruphrecht --- part of their deal is that Benson has to follow Jamieson's orders to the letter --- and Martin puts on an amazing show as a mischevious man child.

It has recently come to my attention that this film is not only criminally underrated, it is also not widely viewed. Over the past month I keep referencing it's many virtues to colleagues and friends, only to be met with blank stares and polite disinterest. So here's a little push to encourage you to mend your ways. And like all the best films, "Dirty Rotten Scoundrels" has a great training montage. Enjoy: