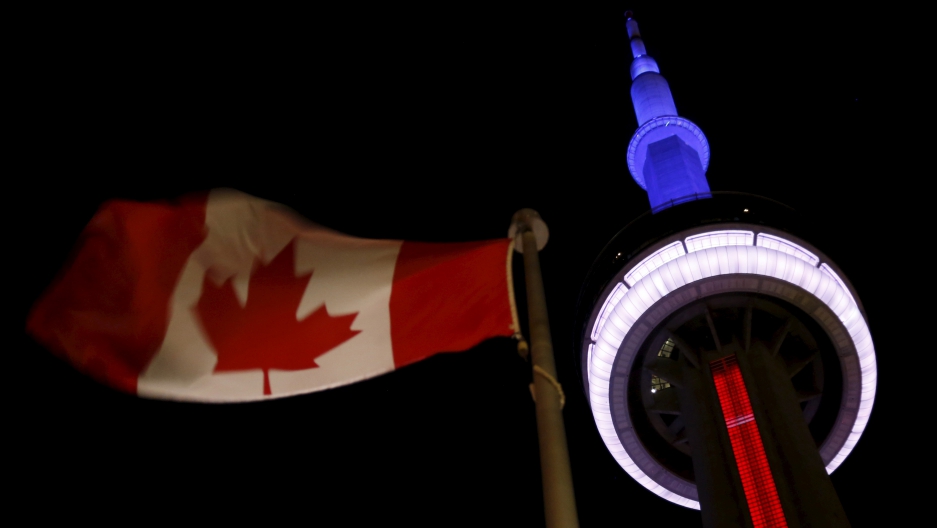 The landmark CN Tower is lit blue, white and red in the colors of the French flag following Paris attacks, in Toronto November 13, 2015.

There's another important group of people watching the US presidential campaign closely even though they can't vote here: Canadians.

And yes, the race for the White House is serious business. But that doesn't mean you can't have a little fun with it.

Take this video announcing that Canada — the entire country — is running for US president and making big promises.

Canadians care so much about the elections they're paying attention to the primaries.

"We're always paying attention," says Laura Lynch of the CBC. "But this year, I mean, given the characters and the candidates and their statements you just can't take your eyes off it. It's just unbelievable. Every day something comes out that begs for parody."

"It started a few months ago when he stated he wouldn't let any Muslims into the country and criticizing Canada for its stance on allowing Syrian refugees," she says. "While people were poking fun at him there were also some serious efforts to strip his name from the Trump Towers that are here in Toronto and Vancouver."

Canadians also like one of their own, Senator Ted Cruz. He renounced his Canadian citizenship. But Lynch says that doesn't matter. "You go to this website 'Ted Cruz for America' and it will direct you to a government of Canada website," she says. "Of course it's not his website but you can read about what makes us so great."

The final candidate who gets the most attention is Democratic candidate, Senator Bernie Sanders.

"He's pretty much Canadian," she says. "He's from Vermont."

You can tell that Lynch is having fun with the elections. But she gets serious when it comes to the very real consequences the American election has on Canada. "What you decide as a nation affects us so profoundly that we feel invested in this," she says.

So they'll continue to watch, and parody if need be. They can't look away. They even offered a sanctuary if Trump gets elected.

When asked if Canadians will stop looking at the US elections like a train wreck, Lynch had a simple answer.

"Not going to happen."