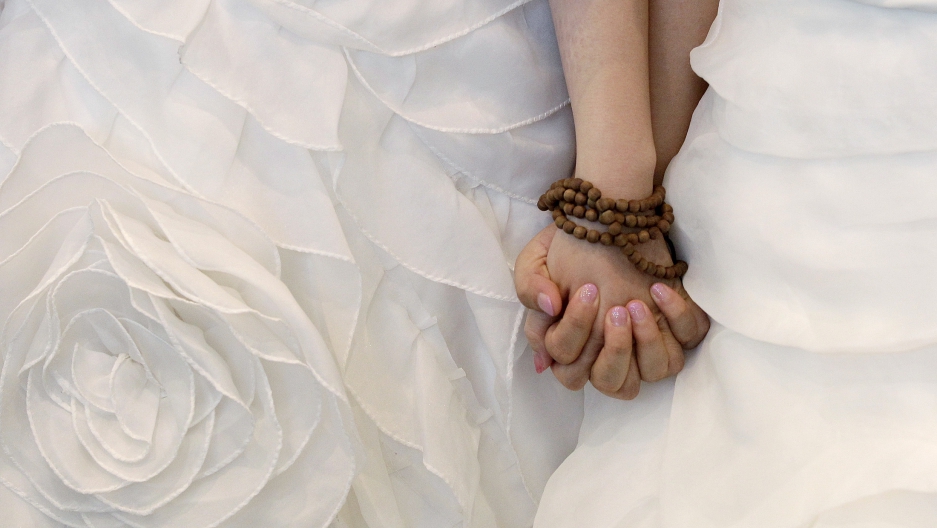 You Ya-ting and Huang Mei-yu hold hands after their symbolic same-sex Buddhist wedding ceremony at a temple in Taoyuan county, northern Taiwan, August 11, 2012.

Political scientist Shanto Iyengar says our country’s biggest social divide might not be race or religion. According to a study he recently conducted, it may in fact be political affiliation.

“In the good old days — the 1950s, the 1960s — party affiliation made virtually no difference to interpersonal relations,” says Shanto Iyengar, a professor of political science and communication  at Stanford University.

Now, however, things are vastly different. In the 1950s, when people were asked how they would feel if their child were to marry someone from another political party, less than 10 percent of Americans felt troubled or displeased by the prospect of inter-party marriage.

“Thirty years later, around the late 1980s, the mid 1990s, we began to notice a dramatic change,” Iyengar says. “More than 25 percent now say that they would be troubled by the prospect of their offspring marrying outside the party. ... If you look at marriage across party lines today, it's extremely infrequent. Maybe 10 to 11 percent of American couples actually have divergent party registrations.”

In another study, surveyors asked people to judge resumes to see which cues would make someone more likely to hire a high school senior for a job. Surveyors manipulated the resumes to make the seniors sound like they were of a certain race, gender and academic achievement. They also changed the resumes to give cues about which political party the seniors belonged to. As it turns out, potential employers were more affected by political partisanship than by any other factor.

“It turns out the [political] party cue dominated. It dominated credentials, it dominated race, it dominated gender. So people were basically going out of their way to penalize the kid who happened to be active in the opposing party,” Iyengar says.

“It’s an age of political correctness,” Iyengar says, “so when people are asked questions about race or gender or age and they are asked to offer opinions about members of racial groups or gender groups or religious groups, they are not very spontaneous. They feel constrained. But when you are asking people about Democrat and Republican they feel ... free to say all kinds of bad things about their partisan opponents. The social norms just don't apply.”

The political divide in the US is strong, but Iyengar says America is far from the only place affected by this phenomenon.

“We're actually not as polarized compared to several other countries. So for example we've been looking at Spain ... and we’ve also been looking at Belgium where there's a big divide based on language,” Iyengar says. “It turns out in these highly divided societies, where they're divided on grounds other than politics, we have sort of replicated the American pattern. We find that in Spain and in Belgium, the party divide is quite intense and competes with these other very salient social ethnic divides. So it doesn’t seem to be a uniquely American phenomenon.”