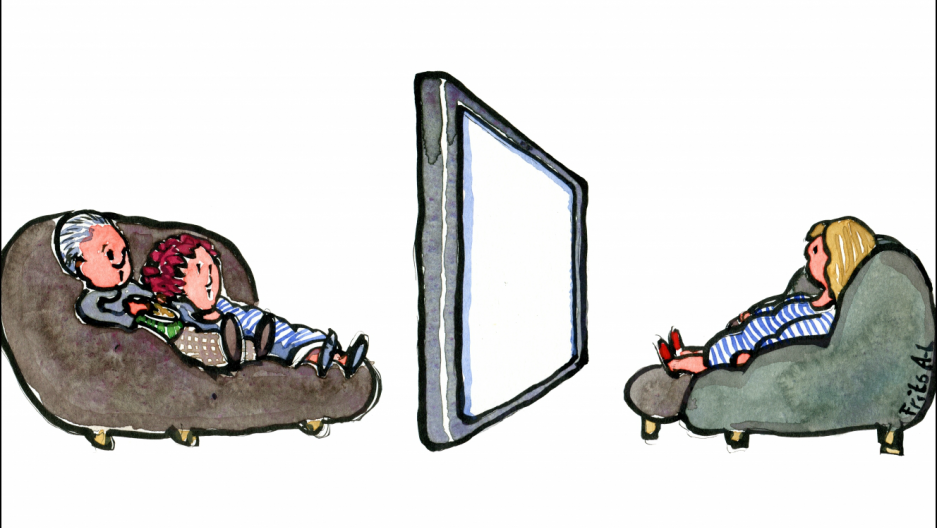 Valentine's Day fallson a Sunday this year, and unless youlikegoing out for an expensive prix fixe dinner on one of the busiest nights of the year, that means it's a perfect night to Netflix and chill. Especially if you're celebrating with your cat and/or roommate. I've prescribed the optimal viewing experience for each potential Valentine's Day-inducedemotional state below --- let me know if you've got other recommendations in the comments.

"Burning Love"
I know I've talked about how great this showbefore, but I'm guessing one more reminder might be in order. Pictured below is a real exchange that takes place, and it only gets better from here.

"Sense and Sensibility"
A Jane Austen classic that is both romantic and restrained enough for those more like Elinor Dashwood.With the bonus of the late Alan Rickman as a proper but dreamy suitor to Marianne (although he is sorely in need of a haircut). Plus, there are interludes with scenes like this:

If You Like Feelings and You Eat Cotton Candy in Bulk

"Notting Hill"
Best served with a pint (or two ...) of Ben & Jerry's ice cream. I would recommend this flavor.

"UnREAL"
Guys this show is so awesome and addicitive if you haven't seen it you should just watch no matter how you feel (but the above emotional state is definitely ideal). This behind-the-scenes drama shows the producers of a reality show suspiciously like "The Bachelor" and the questionable lengths they'll go to in order to make good TV.All the drama of reality TV ---but smarter and more bitter.

"Happy Together"
This is the highbrow pick of this list: it's a beautifully shot drama from Hong Kong director Wong Kar-wai about a gay expatriate couple living in Argentina. The film followsHo Po-wing and Lai Yiu-fai's destructive relationship as they cycle through breakups and reunions, healing each other only to slice open old wounds. It's not a total bummer: Lai achieves a sort of salvation by the end of the film, and in the meantime you get to hear lots of good tango music.
See also:"Eternal Sunshine of the Spotless Mind"

If You're Half of a Codependent Relationship That's Not Sexual

"Peep Show"
Flatmates Mark and Jeremyhate one anotherdeeply, but can't seem to function without each other. A fantastic British series that has run for nineseasons. I have no idea why it hasn't been adapted for an American audience, especially since it's got a really good thing going with lots of point-of-view shots and internal dialogue that give it a certain wacky flair. I would recommend starting from the beginning, but Mark's wedding episode is not to be missed.

If You've Made It Very Clear to Your S.O. That Grand Gestures Are the Only Acceptable Form of Devotion

"I Love You Philip Morris"
Steven Russell is a genius con artist whomeets the love of his life in prison and then spends the rest of his time concocting elaborate cons so the two can stay together. That pretty much sums up this movie, and it'sfantastic: not only is it based on a true story(!), but it has an unusual balance of intense romance coupled with lots of dark humor that is quite charming.

(He's referring to the fact that his loverpaid off someone for a prison beating. #trueromance)

"Thelma and Louise"
This needs little explanation, but is worth the reminder that there's a very young, very shirtless, very beautiful Brad Pitt. And two totally badass women. H/T@EllenRebeccaM
See also:"Whip It"

If You're Nursing an Impossible Crush and You Want to Wallow

"My So-Called Life"
The gold standard in teen angst dramas, you can yearn for Jordan Catalano along with Angela Chase. Sometimes it's just easier to love someone from afar.H/T@EllenRebeccaM

If You've Maintained a String of Lovers Well Into Your 60s

"The Great Beauty"
This is a 2-and-a-half-hour commitment, so my recommendation is to open a bottle of wine, get comfortable, and make sure you have snacks. It also happens to have won the Best Foreign Language Film Oscar and is part of the Criterion Collection, so this is a great highbrow choice. The short version: On the eve of his 65th birthday, playboy Jep Gambardella gets introspective and spends a lot of time thinking about the past set against a backdrop of Rome's most beautiful sights. What matters: this is simply put one of the most beautiful films I've watched in years.