Greenland's Sermilik fjord is choked with huge icebergs from one of the island's biggest glaciers. But climate researchers working in the fjord and on the Helheim glacier are looking for tiny clues in hopes of getting a better handle on how climate change might affect the region in the decades ahead, and how those changes might in turn affect the rest of the world.

We all know the big story about Greenland — the world's second-largest ice cap is melting fast as the planet warms up, and pouring billions of tons of water a year into the ocean.

But to really understand the dynamics of that melting, and what it might mean for the future of the region and beyond, scientists have to look small. The World's Ari Daniel rode along with two teams of researchers who are using new approaches to examine some of the smallest details of the ice and water in and around one of Greenland's biggest glaciers. This is the second of his two reports from the edge of the ice sheet. (Read/listen to Part 1)

Nicholas Beaird has a problem. He stands aboard a ship called the Adolf Jensen in Sermilik fjord in southeast Greenland, collecting water samples in copper tubes. Or at least that’s what he’s trying to do.

“The cold welder is not sealing the tubes properly,” Beaird admits. “They keep developing little leaks.”

He tosses another tube into the discard pile, which is growing fast. And Beaird, an oceanographer thousands of miles away from his lab at the Woods Hole Oceanographic Institution on Cape Cod, doesn’t exactly have tons of options to salvage his project.

“There’s no running to the store to pick up something if something breaks,” he says.

SEE ALSO: In Greenland, a climate change mystery with clues written in water and stone

This means that Beaird needs to figure out what’s going on with his copper tubes, since no other kind of container will hold what he’s looking for in the water below: the noble gases helium, neon, argon, xenon, and krypton — all trace elements from the Earth’s atmosphere.

Noble gases are here in only tiny amounts but Beaird says they could provide big clues to the future of Greenland’s massive ice sheet and the ocean that surrounds it. 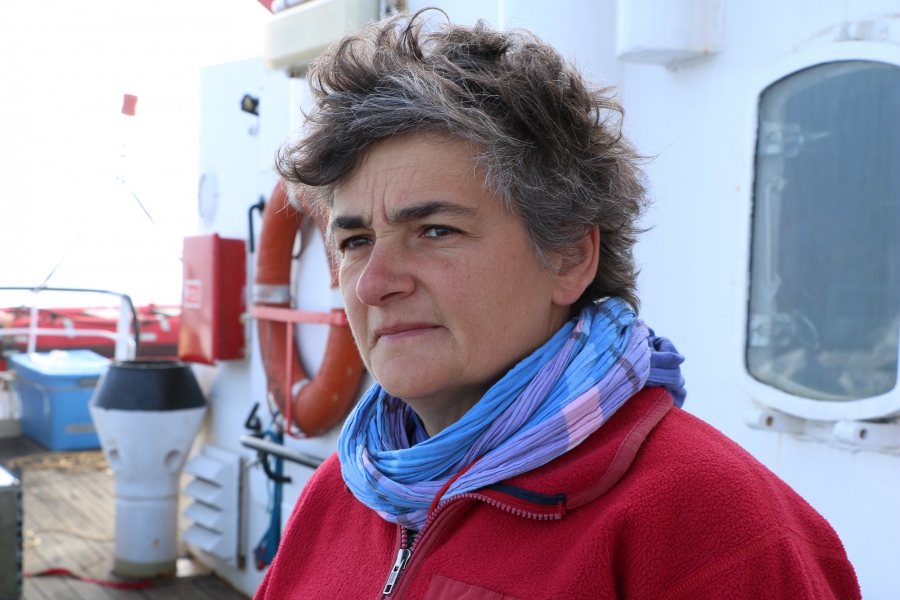 “There’s a whole series of feedbacks and processes that are linked (and) are speeding up some of the changes” in this part of the world, says oceanographer Fiamma Straneo. “We have to understand these details so we can put them in the models and make predictions of how the ocean circulation might respond, how the ecosystems and the fisheries might respond.”

This fjord is where the Helheim glacier meets the North Atlantic. And it’s actually swirling with different varieties of water. There’s salty sea water of course, along with two distinct types of fresh water — melted snow and ice from the top of the glacier, and melted ice from the botton of the glacier, deep underwater. Each of those carries different concentrations of those noble gases. Think of the water types as different colored paints that only mix together slowly. And you can tell them apart if you look closely enough.

“The noble gases let us do this,” says Fiamma Straneo, the lead researcher on this expedition. “We can distinguish whether it was water that melted on top of glacier, or whether it melted at the bottom of glacier.”

As for why anyone would bother with all this, Straneo says knowing how much of each type of water there is here, where it’s coming from, and where it’s going, can help us figure out how the ocean, the glacier and the air are all interacting as this part of the world warms up. In general, we know that the ice sheet and glaciers here are melting fast. But scientists also want to know how much of that melting is from warmer air above, how much is from warmer water below, and what that all might mean for knock-on effects in the ocean. 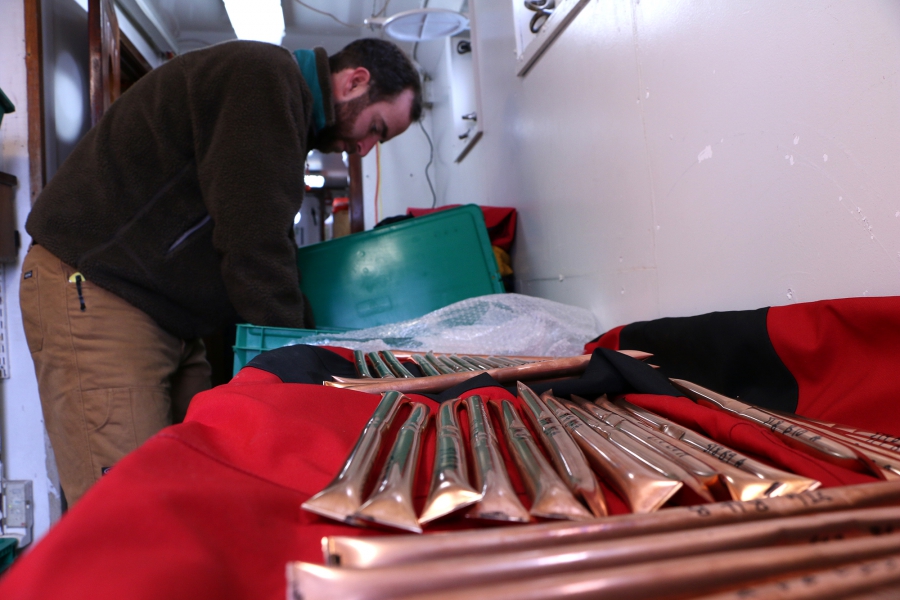 Researcher Nicholas Beaird had planned to use these copper tubes to capture fjord water containing different amounts of trace atmospheric gases, but the tubes malfunctioned and he had to improvise on the fly. The gases can provide important clues to where and how glaciers are melting.

“There’s a whole series of feedbacks and processes that are linked [and] that really are speeding up some of the changes,” Straneo says. “So we have to understand these details so that we can put them in the [computer] models and make predictions of how the ocean circulation might respond, how the ecosystems and the fisheries might respond.

The noble gases are a relatively new way to track some of those changes. For now, though, without working copper tubes, the team is stuck.

But nearby, another team of researchers is having better luck deploying another new technology. They’re at work right above the terminus of the Helheim glacier, where it calves into the sea, bolting a state-of-the-art laser onto the canyon’s rocky margin

“What we are hoping to do with the laser is to map the glacier in very high resolution in three dimensions, multiple times per day,” says Gordon Hamilton, a glaciologist at the University of Maine. The high-res laser will be gathering these scans for an entire year. No glacier has ever been imaged like this before. 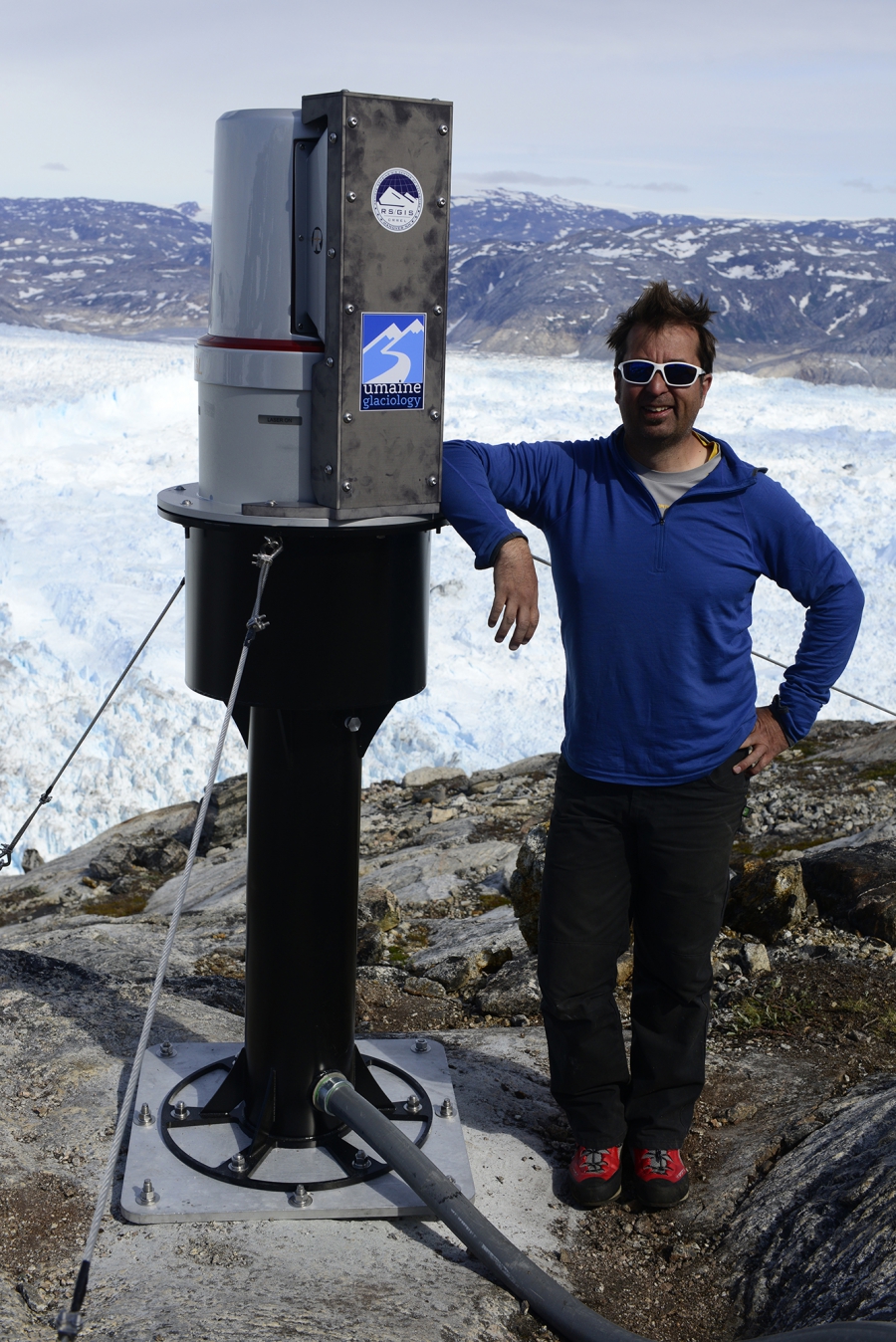 “We didn’t anticipate the changes that happened (in Greenland) in the last ten or 15 years,” says glaciologist Gordon Hamilton. “The ice sheet has waxed and waned with time for sure, but I don’t think it’s been through such a large set of changes in such a short period of time.” Hamilton hopes the new high-definition laser scanner he and his colleagues have just installed on the rim of Greenland's Helheim glacier will help keep pace better with the rapid changes in the region.

Hamilton says the new laser allows his team to monitor changes in the glacier’s thickness every few hours, and even can track how individual parts of the glacier are changing speed.

Displayed on a screen, the results of this real-time monitoring look like a pointillist image in 3D, which you can move around and zoom in on.

“We can actually measure the width of these crevasses,” say team member Pete Gadomski of the US Army Corps of Engineers' Cold Regions Research and Engineering Laboratory in New Hampshire. “We can take a look at the terminus itself, measure the size of icebergs out there as well.”

All of this is important because Helheim is one of the biggest and fastest-moving glaciers in Greenland, and scientists were caught off guard by how quickly it has been melting.

“We didn’t anticipate the changes that happened in the last 10 or 15 years,” Gordon Hamilton says. “I mean, the ice sheet has waxed and waned with time for sure, but I don’t think it’s been through such a large set of changes in such a short period of time.”

As with Fiamma Straneo in the fjord below, Hamilton says the goal is to use the new data to better predict what might be ahead by feeding it into ever-better computer simulations of the changing global climate.

“These (are) very sophisticated models of climate systems,” Hamilton says, which bring together “the ocean, the atmosphere, the big ice sheets, sea ice, clouds — all these multiple components, with the goal of trying to understand sea level rise in the next ten, 15, 100 years.”

Back aboard the Adolf Jensen in the fjord below, Fiamma Straneo’s crew has a more immediate challenge — weaving their way through all the ice that Helheim is spitting out into the fjord.

“It’s impossible here to go in a straight line, or even to zigzag around all of the ice. You just have to relax and know that you're gonna hit some of it,” she says, just as the ship hits a small iceberg.

The ship will be fine, Straneo says. What matters is the mission.

“Greenland right now accounts for approximately a quarter of global sea level rise,” says Straneo, “but the ice loss has been rapidly increasing over the last few decades. We were late in starting measurements, we’re still late now. So we’re playing catch up.”

And Nicholas Beaird, the man with the copper tubes, is still hoping the noble gas project can play a part, because the team has an idea that might solve their problem — warming the tubes in a warm water bath before trying to seal them.

Beaird fills a fresh tube with a new water sample, dunks it into the warm water, seals it, and whips it through the air to see if any water leaks out.

When he’s done, he takes a close look at the tube.

“This one seems good,” he says, to a small chorus of cheers from his colleagues.

The warm water has helped to seal the tubes.

It’s still not clear how the noble gases in the water will fare with this hack, but for now, it’s progress. And in tracking the impacts of climate change up here, even the smallest things — like a pulse of laser light, or an atom of helium, or a bath of warm water — can make a big difference.

This story was produced with help from our WGBH partners at NOVA and the Pulitzer Center on Crisis Reporting.

EDITOR'S NOTE: Gordon Hamilton, the lead researcher in the project to monitor the movements of the Helheim glacier, died October 22, 2016 during a research expedition in Antarctica, when when his snowmobile fell into a 100-foot-deep crevasse.

WATCH: Ari's videos from Greenland:  4 Things No One's Telling You About the Coming Water World / See a Glacier Like Never Before / Waging Science on the High Seas