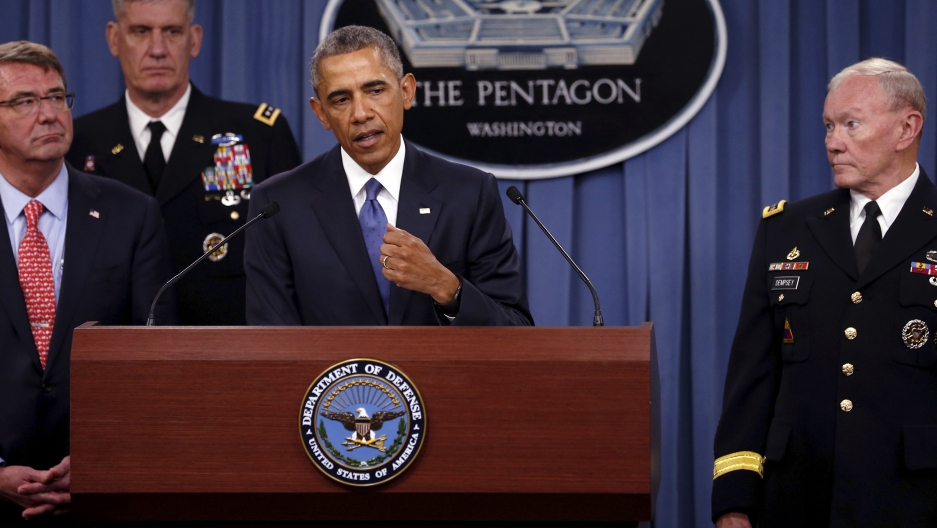 US President Barack Obama is flanked by Defense Secretary Ash Carter, left, General David Rodriguez, second from left, and Chairman of the Joint Chiefs of Staff US Army General Martin Dempsey, right, as he delivers remarks after a briefing on US efforts against ISIS July 6, 2015.

Why does the United States need to modernize its nuclear weapons arsenal?

President Barack Obama who was awarded the 2009 Nobel Peace Prize in part for his efforts at global nuclear disarmament, is at the helm of plans to develop and deploy some of the most powerful and stealthy nuclear weapons yet. That's something that a concerned group of experts say reflects a dangerous and outdated Cold War policy, and increases the chance of an accidental nuclear war in the future.

“What we’re talking about today, and what [former Defense] Secretary Bill Perry and I have come out against, is a new nuclear armed cruise missile that’s launched from our bombers,” Weber says. “We just believe that it’s unaffordable and unnecessary. The Pentagon is currently planning to buy 1,000 to 1,100 of these new nuclear armed cruise missiles, which we think are very destabilizing.”

Though Obama was seen as a peacemaker in 2009, he’s likely making the Nobel committee a little nervous — this proposal represents one of the largest peacetime modernizations of the US nuclear arsenal in decades.

Back in 1987, US President Ronald Reagan and Soviet President Mikhail Gorbachev signed the Intermediate-Range Nuclear Forces Treaty — committing both nations to “reduce their nuclear arsenals, eliminate an entire category of nuclear weapons, and utilize extensive on-site inspections for verification."

In 1991, President George H.W. Bush ordered the US Navy to “withdraw all tactical nuclear weapons from its surface ships and attack submarines.” These weapons remained unused, and Obama formally eliminated them in 2011.

So why the reversal now? Weber says the motivation behind this decision is complex.

“I think it’s largely inertia,” he says. “The current air launch cruise missile is aging — it was developed in the late ‘70s and 1980s; it flies on a 60-year-old B-52 bomber. We’re at a point where we either need to let it age out gracefully — it’s set for retirement in 15 years in 2030 — or we can decide not to replace it, and that’s what we’re recommending.”

Weber says he is “confident” that President Obama will amend his stance and pursue his “vision for a world without nuclear weapons” once the issue is brought more closely to his attention.

“I think he has an opportunity not just to forgo this unneeded $30 billion replacement program, but also, very importantly — and this would be Nobel worthy — to lead the world in an effort to eliminate this particular, very dangerous and destabilizing class of weapons: All nuclear armed cruise missiles,” Weber says.

These weapons are considered so destabilizing, Weber says, because they cannot be recalled once they are launched.

“They’re also destabilizing because they come in two flavors,” he says. “They come with a nuclear warhead and with a conventional warhead. The risk of miscalculation, if one of these is flying towards your country, you have no way to discriminate — to know if it’s nuclear or if it is not — and that could lead to even an accidental nuclear war, which would be terrible.”

In 2010, the US and Russia signed “New START” or the New Strategic Arms Reduction Treaty — a 10-year agreement and a successor to the 1991 START accord. The 2010 treaty limits each side to no more than 1,550 deployed warheads, but thanks to a tricky clause, Weber says there are ways to get around that limit.

“It doesn’t violate the treaty because there’s a loophole in the treaty called the bomber counting rule,” he says. “So each of our 60-ish bombers only counts as one warhead, even though they can carry up to 20 of these air launch cruise missiles each.”

Weber argues that there’s still time to put on the brakes — this program has not yet started, and no American jobs are at stake.

“Indeed, a group of eight US senators recently sent a letter to President Obama calling very strongly for him to cancel this program,” he adds.