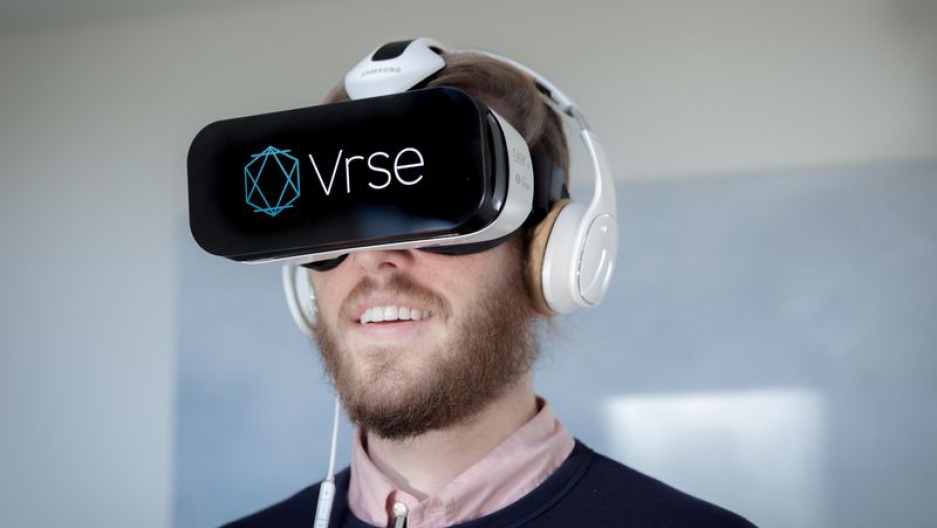 A viewer experiences a Vrse.works virtual reality film through a headset.

Until recently, virtual reality was the stuff of science fiction. But last year, Facebook placed a large bet on the future of the medium when it bought Oculus Rift, the leading virtual reality technology company.

Oculus VR will start selling its affordable, state-of-the-art setup early next year, and Samsung has just released a $99 version of its Gear VR headset.

Some analysts and artists are beginning to wonder what virtual reality as a consumer product will mean for the future of storytelling. Obviously there will be markets for gaming — and pornography. But, for some directors, the medium has more idealistic applications.

Chris Milk, who over the last decade has directed music videos for artists like Kanye West and Arcade Fire, is one the first to explore virtual reality film making. In fact, he has invented a VR camera that is really just a sphere-shaped cluster of Go Pro cameras strapped together on a tripod, pointing in every direction.

He’s used his camera to make a full-fledged VR film about a Syrian girl named Sidra who was living in a refugee camp in Lebanon. The film takes viewers inside her family’s tent, following her to school and to the sand patch where she plays soccer with her friends. But directing for virtual reality is nothing like what Milk learned in film school. 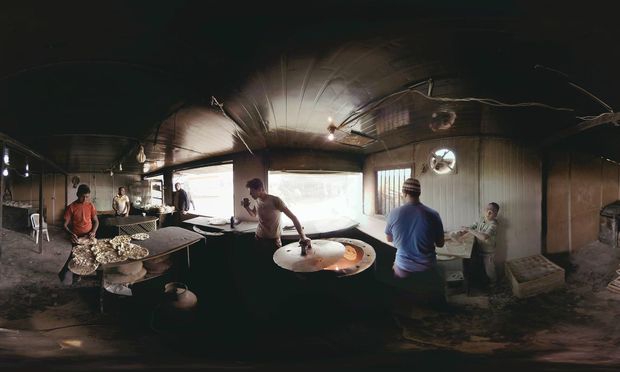 A still from Vrse.works’ virtual reality film, “Clouds over Sidra,” produced for the United Nations by Gabo Arora and Chris Milk.

Jeremy Bailenson, who directs the Stanford lab, says that’s because shooting in 360 degrees makes it impossible to focus the viewer’s attention on any one thing. “Directors are brilliant because they tell you when to look and where to look. In VR, I get to look wherever I want.”

The virtual reality medium is immersive in a way regular film isn’t.

“I've spoken to people who have seen the [Sidra] film who actually have been to a camp and felt that it actually gave you a sense of it was like to be there,” Milk says.

What’s more, Milk noticed that filming with his newly-invented spherical camera has a different effect on film subjects than a normal camera does.

“We were just sticking it places and people were like 'Oh cool!’ It doesn't feel the same as if another person was standing two feet away from them,” Milk says.

For film viewers, a 360-degree immersive experience gives them a new sort of empathy and understanding of the film subjects.

“It turns out that this lesson, when you walk a mile in someone's virtual shoes, when you actually wear their body, this resonates,” Milk says.

Milk believes the VR medium has the powerful ability to change the way people think about far-away experiences, situations, and people. Since the Sidra movie, Milk and his team have also filmed inside an Ebola clinic in Liberia. And he learned a lot on a project with the New York Times and Google about child refugees.

“I do think that there's a tremendous amount of good that can come out of this medium. There's something really powerful about sitting in the same room with another person and hearing them tell you their story. The way that you feel about them changes. You feel their humanity in a different way, you feel it in deeper way. It's different than television or from the radio. It's different from cinema, it’s different from literature,” Milk says. “[How exactly it’s different] — that's what we're trying to figure out.”