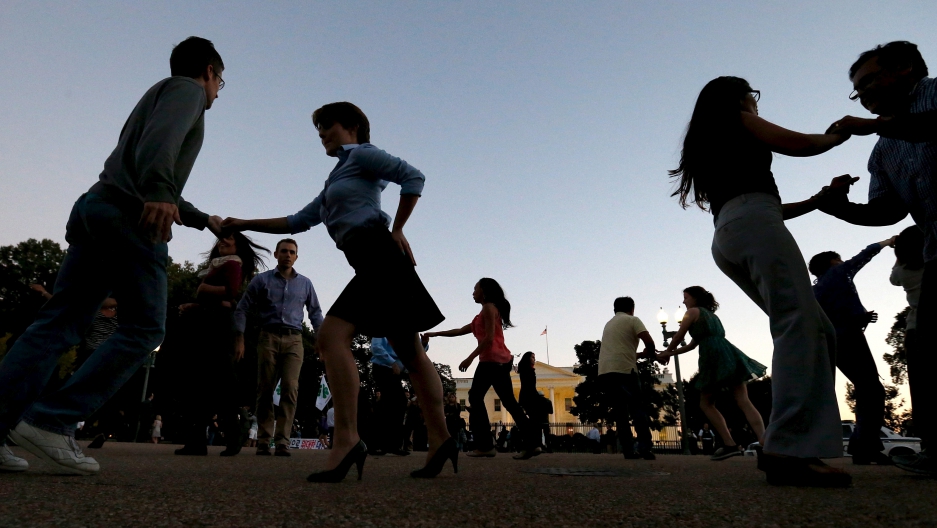 Members of social dance club, Rueda de la Calle DC, perform Cuban salsa dances on Pennsylvania Avenue in front of the White House in Washington. The group chose the White House as their venue that day because famed Cuban musical group Orquesta Buena Vista Social Club was performing inside at a reception.

Dancing is a good way to keep warm.

That's a reminder you don't need quite yet — seeing as this winter is unseasonably warm. But when it finally cools down, here are a few albums that should be able to get you on your feet:

"Holy Forest" is what happens when Gambia meets Memphis, TN, and this opening track represents the blending of two those really distinct sounds. Pay attention to the combination of the kora — the west African harp you hear throughout this song — and the soulful voice you would have heard in a 1960s recording from the legendary recording studio, Stax.

I love this album, and every track on it. In fact, I liked it so much, that it was also on my list of Summer Picks. You may recognize Bomba Estéreo, because earlier this year, during their tour across the US and Mexico, they made news when they brought a Donald Trump piñata onstage. My wish list is to see this band live in '16.

I first found out about this album because it was handed to me when I went to the WOMEX music festival in Budapest back in October. Femina is trio of women from Buenos Aires. A rap group. The production is so clear and clean. And although I'm not really sure what they're singing about, I sense a lot of power and strength from these women.

If someone told me that Mbongwana Star had been abducted by aliens and taken to a studio on Mars to record this album, I would probably believe them. Which is fitting, actually, seeing as the original name of this album was "From Kinshasa to the Moon."

I'm a really big fan of how acoustic and feel-good this album is. It's full of songs that will get stuck in your head — in a good way. This song is no exception.

The word "ibeyi" means "twins" in the West African language of Yoruba. Lisa-Kaindé Diaz and her twin sister, Naomi, are connected to that culture through their famous father, who was a percussion player for the legendary group Buena Vista Social Club. This album combines the acoustic sounds you would hear in Yoruba chanting rituals and the polyphonous harmonies of Eastern Europe.

This album is a bit bittersweet. Buena Vista Social Club began around the time "PRI's The World" first hit the airwaves. But after two decades, the legendary group has been saying goodbye by touring around the world this year. "Lost and Found" is a collection of studio recordings and live cuts than span their entire career. Specifically, the song "Guajira En F" stands out because the rhythm is razor sharp. They never missed a beat.

This is the cover of the Beatles' "Because" you never knew you needed. Grupo Fantasma is normally such a free-wheeling and boisterous good time, and this album is no different. "Problemas" is such a danceable fun record. But with this track specifically, they're a little more morose. And it really works for them.

Yes, April and I chose the same album. It's that good.

This 10-piece Brazilian band is a powerhouse by sheer force of numbers. This album is such a good showcase of their ability to combine Colombian cumbia, Nigerian afrobeat and just some good old funk.

We included tracks from a few other favorites at the bottom of this playlist, so make sure to check those out too. And now, we want to hear from you! What was your album of the year? Make us dance in the comments below.