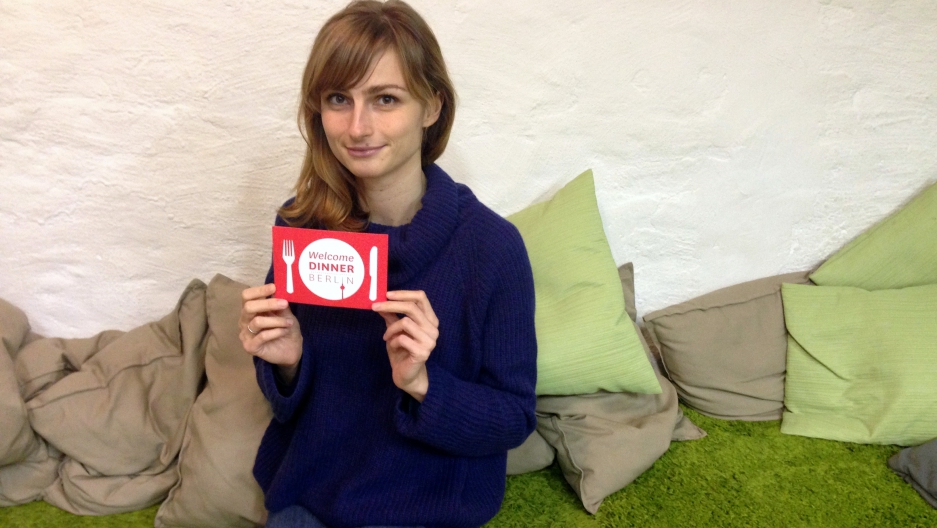 From the federal government to churches to citizen volunteers, the Germans have gone out of their way to answer Chancellor Angela Merkel’s call to provide refuge for hundreds of thousands of people from Syria, Iraq, Afghanistan and other troubled lands.

About once a week, 36 year-old Zafar — a Berlin taxi driver — pulls up to the sidewalk outside of a government administration building where refugees line up to register for benefits. People cue up at all hours of the day and night for hours at a time. Volunteers like Zafar show up regularly with clothes, blankets, hot drinks and food.

On this evening, Zafar and a friend hand out 30 pieces of pizza. They disappear in seconds.

One reason Zafar keeps coming back, he says, is because this is personal.

“We [were] also refugees,” Zafar says about his parents, who came to Germany from Pakistan in 1979. “We think from another level, you know?”

Zafar himself was born in Germany. Like many Muslims, he understands there is a religious obligation to help out fellow Muslims in need. But Zafar says he is proud to see so many of his fellow Germans, mostly non-Muslims, going out of their way to lend a hand to the refugees.

“It’s not just about religion. This is from the heart. It’s coming from the German people,” he says.

A longtime student of German literature, Mandy Seidler helped found a new project called Welcome Dinner Berlin. Seidler got the idea from an organization in Sweden.

It’s as simple as it sounds. The goal is to set up dinners at people’s homes to start building connections.

“It’s always difficult to get to know each other when you are in different communities. When you are living here, you hear so many things about refugees. But you do not talk to them. And when you invite someone to your home, you need to talk,” Seidler says.

It’s early days. But one of the dinner project’s success stories is about two families, one from Aleppo, Syria, and the other from Berlin. 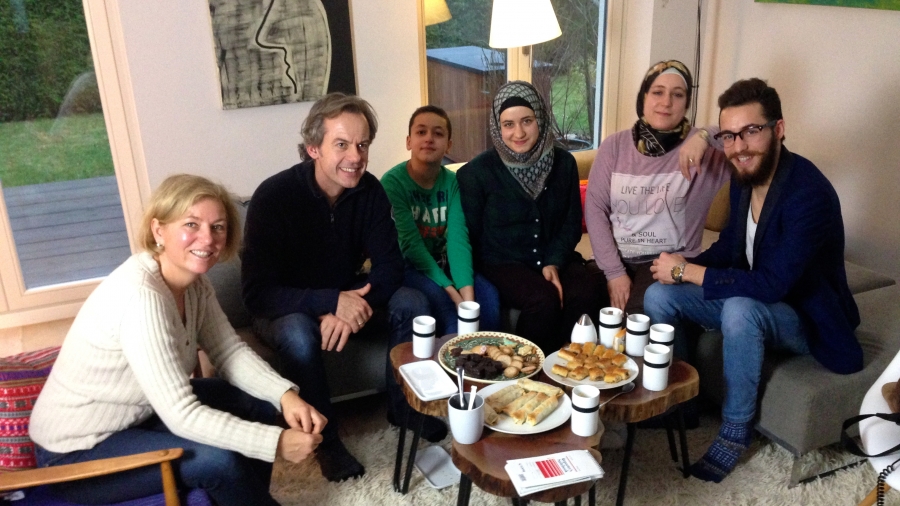 Sabine and Alexander Kluge (left) are helping a family of refugees from Aleppo, Syria settle into their new life in Germany.

Alexander Kluge is a business consultant who lives with his wife Sabine and their two kids in an affluent suburb of the capital. He says they jumped at the chance to invite Syrian refugees to their home for dinner about three months ago.

“We wanted to show our kids what we can do for the refugees and of course we were very curious to meet some real refugees,” Kluge says.

“If you just [make] a donation, you don’t get to know [any refugees] and we wanted to talk …and see how it feels to be here.”

The Kluges have since become friends with the Syrian family. And they have been helping the couple and their three children with things like finding an apartment and good schools, dealing with official paperwork, and starting to think about job hunting.

The Syrian father doesn’t want to give his name, because he’s got relatives back in Syria that he worries about. He says not all Germans have been like the Kluges, exemplars of what the Germans call Willkommenskultur – “welcome culture.”

“We find many refuse us and many accept us. You can see it in the street, just look to the faces and you can see the situation,” he says.

Occasionally, he says random people in Berlin have said things to him and his family like, “Go home!”

But for the most part, he says he’s been overwhelmed by the generous reception to which his family has been treated.

Like many Germans, Alexander Kluge grew up hearing refugee stories from his own relatives.

“My family originally had to move from …the east, from Poland,” he says.

“They arrived as refugees in Heidelberg and they were not treated really good as they arrived. So, we have a long tradition of refugees.”

This is something many Germans can relate to. Millions of ethnic Germans were driven out of their communities in Eastern Europe after World War II and they had to start anew in postwar Germany. That shared history makes many Germans feel compelled to welcome this new wave of refugees.

But the political winds are shifting.

Chancellor Angela Merkel has been under growing pressure to put a limit on the numbers of refugees entering the country. This week, she announced that Germany would significantly reduce the flow of new arrivals, because “it’s in the interest of everyone.”

About 1 million people have arrived in Germany over the last year, and the system for accommodating them is under strain. That’s evident in Berlin’s main refugee registration center, known by its German acronym of LaGeSo. In November 2014, staff there processed applications for 900 refugees. Last month, there were 9,000 applications.

“We are overwhelmed,” says Silvia Kostner, a spokeswoman at LeGeSo. She says the volunteers who show up every day have been indispensible. Some hand out food and water, others help with security, and even medical professionals have shown up to assist with injured and sick people.

Kostner says her generation, who grew up in the decades after the war, still carries a lot of guilt about German history and, in particular, with regard to the Holocaust. Now, Germans are eager to give something positive back to the world.

“People know that we are really quite rich now,” Kostner says. “We have a lot of things to give.”

But this spirit of generosity and compassion cannot last forever, she adds.

It will be difficult to sustain, she says, "if it comes to the point where [the refugee crisis] starts to impact people’s private lives.”