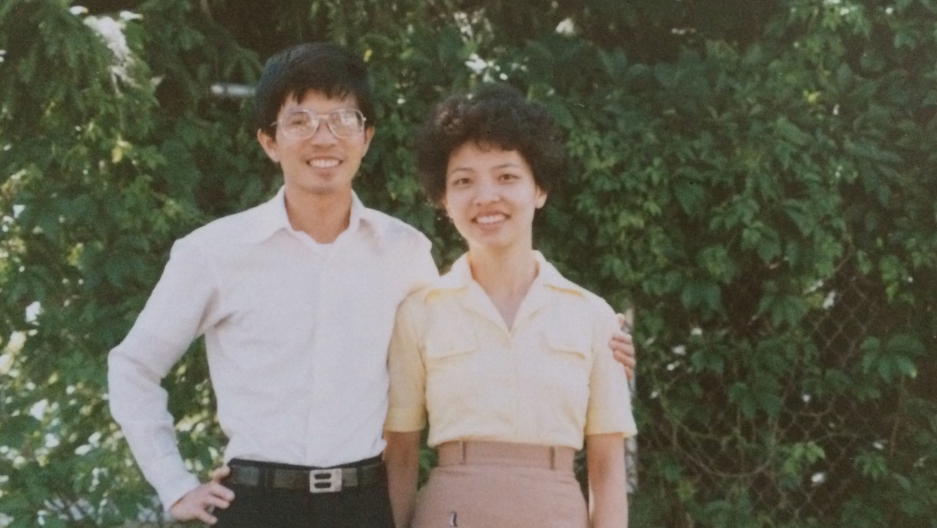 My parents, Zen Soun and Shu Chen Huang, shortly after they arrived in the US in May 1986. All these years later, my mother doesn't like to answer the phone because she's self-conscious about her accent.

The first time I watched the “Parents” episode of the Netflix show Master of None, it hit me like a revelation. I laughed. I got a little teary-eyed.

Update: Master of None wins an Emmy

On Sunday, Sept. 18, the "Parents" episode of the show took the Emmy for Best Comedy Writing. It's a first for an Asian American TV show and writer, so we asked Pien to comment on the award. Listen here.

It’s one of the show’s best episodes, and one of Aziz Ansari’s own favorites. It features his real parents, and addresses the relationship between immigrant parents and their children. It was so spot on in describing my own experience as the child of immigrants.

In the show, friends Dev (played by Ansari) and Brian are bonding over the weirdness of their parents — Dev’s are from India, Brian’s from Taiwan. And at one point, Brian is thinking about doing something nice for his dad, and he’s stumped. “He doesn’t really have any interests,” Brian says. “He likes drinking water, staying hydrated. I could get him a gallon of water as a gift.”

The presents my sister and I have gotten our parents are super practical, and based on that exact line of reasoning: “I don’t know, what could Mom use?” One time, we got her a wall-mounted trashcan that reuses bags from the grocery store. Another year, we got them a water-saving device for their toilet.

The show had a point. What do I really know about my parents? If I’m honest, it’s kind of like what Brian says about his dad: “I mean, I know the big points. He was poor, he was in another country; it was tough. Then he came here. I mean, I got the gist of it.”

Dev and Brian decide they should make an effort to get to know their parents. They take them out for a fact-finding dinner and ask them what it was like growing up in a different country — what they did on their first days in America.

These are questions I’ve always wondered about my parents, but have never asked. And here was my chance. So I watched the "Parents" episode with my own parents, Shu Chen and Zen Soun Huang.

The show was spot on for them too. My dad says he sees himself in Brian’s dad, a stoic Taiwanese immigrant who can’t think of a single noteworthy story from his childhood to tell his son. My mom identifies with Dev’s Indian mom, who was scared to answer the phone when she first got to the US because people wouldn’t understand her accent.

I was just 2 when we came to the US, so I don’t remember the move. What I do remember is having the most Chinese American upbringing ever. I played the piano and violin, and went to math enrichment on Saturdays. I could never go to birthday parties, because I had Chinese School on Sundays.

All that structure, and the emphasis on grades — I thought my parents hated fun. Their perspective when I was growing up was similar to Dev’s dad’s in the show: “You realize fun is a new thing, right? Fun is a luxury only your generation really has.”

What I didn’t realize until I spoke with my parents was the uncertainty of it all. My whole childhood, they projected such confidence: You just sit there and study. We’ll take care of the rest.

And they did. They worried about all the big stuff — what will we eat? How will we live? Did we make the right choice? And they hid it all from us. They never had a grand plan. Just hope and faith that striving would get us to a better place.

My mom told me that the whole reason they came here was to give my sister and me a better life. “That's why I push you guys kind of hard,” she says. “Though ... at that time, you hate it. But now, think back, you should appreciate it. I don't know if you do, but I think you should.”

I am grateful. As far as sacrifices go, missing all the birthday parties pales in comparison to what my parents gave up. They left creative careers, property and family in Taiwan to start over here. They work so hard — my Dad as a restaurant owner, my Mom as a dental assistant — and they almost never socialize or go on vacations.

I’m in my 30s now — around the same age as my parents when they came to the US — and the idea of starting over completely seems like such a hard call to make.

“It is hard,” my Mom tells me. But she doesn’t regret it. Sometimes, she wonders if she should have gone back to school or had a different career, but she’s worked hard to get where she is, and it’s a pretty good place. “I'm tired of going back to start again,” she says. “If I start again, I probably won't do better than now.”

Related: How Aziz Ansari helped me embrace my 'Otherhood'

The show’s call to action, under the fun and satire, is for parents and kids to reach out a little bit more. It’s not like it’s opened the floodgates — we are definitely not talking weekly about our feelings. But that little bit of connection has been just right for my family.

And immigrant parents — they just keep on giving.

Ansari wrote a blog post about how his dad took most of his vacation time to act on the show, and told him that the best part was that they got to hang out. He said: “I really just did it so I could spend more time with you.”

My own parents, after answering all of my probing questions, sent me home with enough food for the whole week and a Christmas cactus. And though, to this day, my parents have never said “I love you,” they do tell me that I’ve made their “American dream come true.”