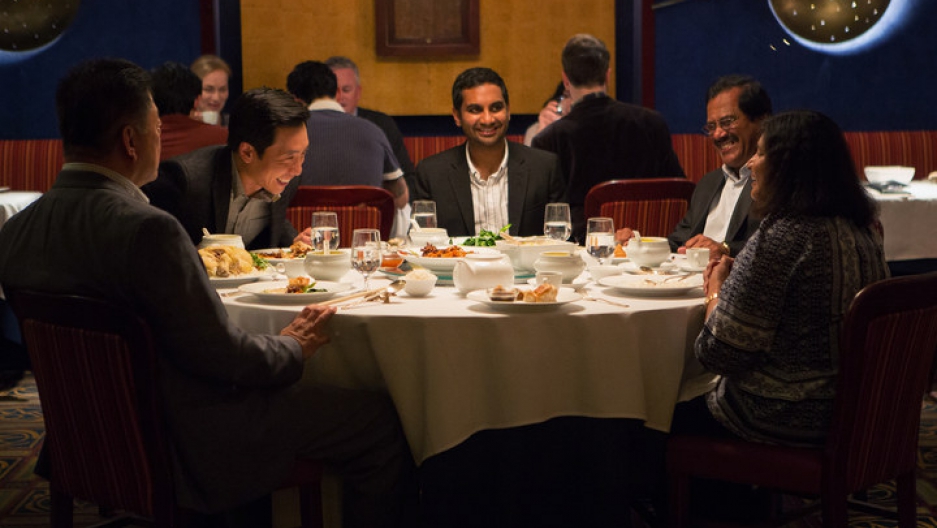 Aziz Ansari (center) shares a scene with his parents in his Netflix series "Master of None."

People in the United States tend to think a lot of things about people with accents: they're not like us, they're dangerous, they're not really American, they’re dumb.

It was a really painful thing to watch when I was young — people speaking slowly and loudly to my parents, who were among the first Indian immigrants to Iowa. Perhaps that’s why my dad always told me and my sister that communication — making yourself understood — is the most important tool to being successful in America. That’s part of the reason I became a reporter.

Movies and TV shows, though — that’s the ultimate level of communication. They’re like the mirror American society looks into to understand itself. I didn’t really see myself in that reflection until Aziz Ansari’s show, “Master of None.”

On the surface, the show is about an Indian American actor in New York City who tussles with universal issues like dating. A little deeper, it’s about the children of immigrants who balance their parents’ culture and the one they were born into, while not really belonging to either. It’s a tricky stance that’s tough to master, and I’ve long wanted to explore how the experience shapes people — because there are a lot of us: the US opened its doors to its fourth major wave of immigration in the 1960s and 70s, and the kids that came with them, or the kids they had when they got here, are now all grown up – and they’re (we’re) shaping the American future.

Just like the Italians and Irish before us, we are the generation that’s changing American culture to include our parents’ culture — so that, in Aziz Ansari’s case, Indian things seep into the American mainstream and maybe in the next generation, become American. “Master of None” explains some of the tensions cropping up in that process. Seeing those issues aired in a mainstream venue is, frankly, freeing.

Related: Strangers around the world gave Aziz Ansari the most intimate details of their romantic lives - their text messages.

I happened to talk to Arun Rath about it. Until recently Rath was (as far as he and I can tell) the only Asian NPR host, based in California and anchoring Weekend All Things Considered.

“I feel like I’ve been waiting for this show for — I don’t know, it feels dramatic to say my whole life, but there’s not been a show about an Indian guy like this my whole life,” he says.

Rath now sits one cubicle away from me in the WGBH newsroom in Boston. “Master of None” resonated deeply with him too. It made him realize he’s been on a journey when it comes to expecting mainstream representation.

When he was younger, Rath’s expectations were so low that he was what he calls an “Apu Apologist,” derived from the character on "The Simpsons." Rath thought Apu presented a more well rounded, informed picture than anything else out there at the time. As a young production assistant at NPR, Rath was the highest-ranking Asian available to attend an Asian American journalists convention. When NPR asked him to go, he admits he was surprised — he didn’t know there was an Asian American Journalists Association.

Then, when he was in his late 20s, Rath went through a realization phase that Ansari summed up in one quick scene that was over before an episode’s opening title screen. Aziz Ansari’s character’s father asks for help with his tablet. Ansari says he doesn’t want to be late for a movie. The camera zooms in on the father, and then we’re in a flashback of his harsh childhood in a dusty Indian village when a bully smashed his only toy. We zoom back out, out of the flashback, and the father is regarding Ansari with resigned disappointment.

“I went through exactly something like that with my father,” Rath says.

This is the “burden” the children of immigrants carry. (And don’t get me wrong, we are fortunate to carry it.) We were the purpose of our parents’ epic struggle through their original, harsh culture into a new, confusing one in this country that often begins with a long period of poverty. And when we fully realize that, we also realize a weighty responsibility to make that litany of bitter hardships worth it.

I've talked to a lot of first-generation Americans who, because of that realization, propelled themselves into careers where they could give back and help change this country for the better. Some sought to specifically help African Americans, as the people who did the work of the Civil Rights movement and prepared the country for an unprecedented wave of diverse immigration.

For Rath, it became important to him to make Weekend All Things Considered as diverse as possible. He scrounged through decades worth of material to make sure his children had TV shows and movies to watch that represented people like them. And he started noticing the small “microagressions” that make people wonder how much race is involved in how they’re treated.

“There are all these things where you wonder — where it’s not quite clear,” Rath says. “Dave Chappelle has this bit about it — ‘is that person racist or are they an asshole?’ ‘Do they have it in for me because I’m brown or some other reason,’ you’re trying to suss out what it is.”

Rath talked to me about all of that, and more, and we recorded it for a new podcast called “Otherhood” I'm creating in an attempt to prove that this is an important point in history to explore and understand. A huge group of people are adding new ingredients to the collective American melting pot with their individual decisions. I want to ask them so many questions: Did you want to marry someone of your same ethnicity? How’d that work out? Are you worried about passing your culture to your children? Have you gone back to your parents’ country? How’d that feel?

There are a lot of things I think we need to talk about – like who the term “first generation” refers to, why that’s disputed, and why it’s so important. I have theories I’d like to check – for example, I think the children of immigrants are drawn together across races, are perhaps the most integrated segment of American society, and could play a key role in helping everyone move more in that direction.

Learning about first-generation people might help us approach the heterogeneous American future with an exhilarated spirit. Because — I can’t think of a less corny way to say it — diversity is fun. For me, the best example of that is India. The country has a lot of problems, but it’s also the most diverse place I’ve ever been – people of thousands of ethnicities and languages live practically on top of each other. You can pass people of five different religions crossing the street. And, most of the time, there’s an implicit air of understanding and tolerance. My own Hindu grandmother used to stand me in her window so her friends in the next building over, three Muslim wives, could check out her strange American granddaughter. And it was awesome. It could be here, too — and shows like “Master of None,” and maybe a scrappy podcast called Otherhood, can help communicate that.