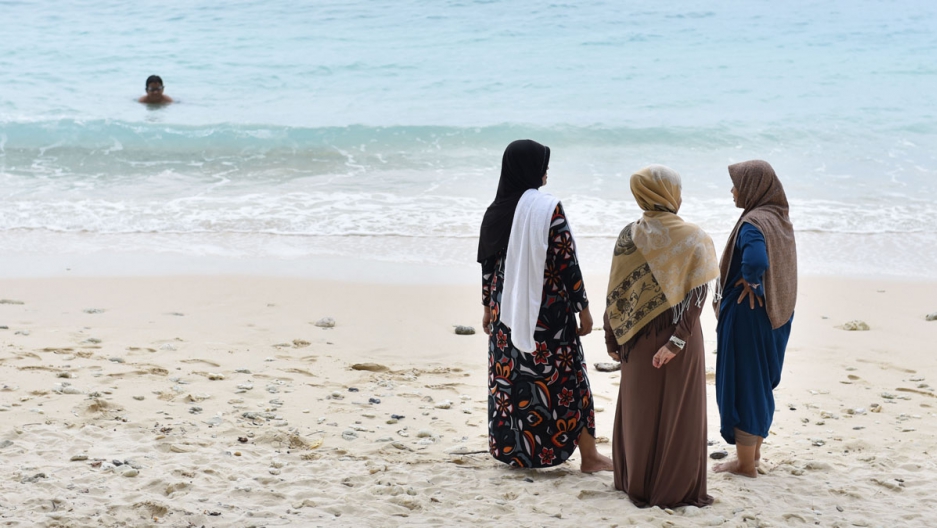 Three women in hijab wait as a boy swims in the ocean in front of the Casa Nemo Beach Resort and Spa of Pulau Weh island, Indonesia. The resort and diving island is only a hour ferry ride away from Banda Aceh, but has significant differences. One being that on this stretch of beach in Sabang, many Muslim women choose not to wear hijab. In Banda Aceh, Sharia law requires the use of head covering and long, loose pants. However, Muslim women commonly go to the beach and in the water fully covered.

The Indonesian province of Aceh is known to many as the place devastated by a tsunami in 2004. But in Indonesia, it’s also known for its conservative religious beliefs. A peace accord signed with separatists 10 years ago allows the local government to implement Sharia law.

Some local authorities have even banned women from straddling a motorcycle, or dancing. Sharia law also forbids gambling and drinking alcohol here, and all Muslim women must wear the traditional headscarf, or hijab.

But Balqis Natasyrah is not wearing the hijab. She’s wearing shorts.

“I cover my head when I pray, I cover it when there are Muslim celebrations,” she says. “But I’m not using it when I’m diving, for example, or when I’m in my own house.” 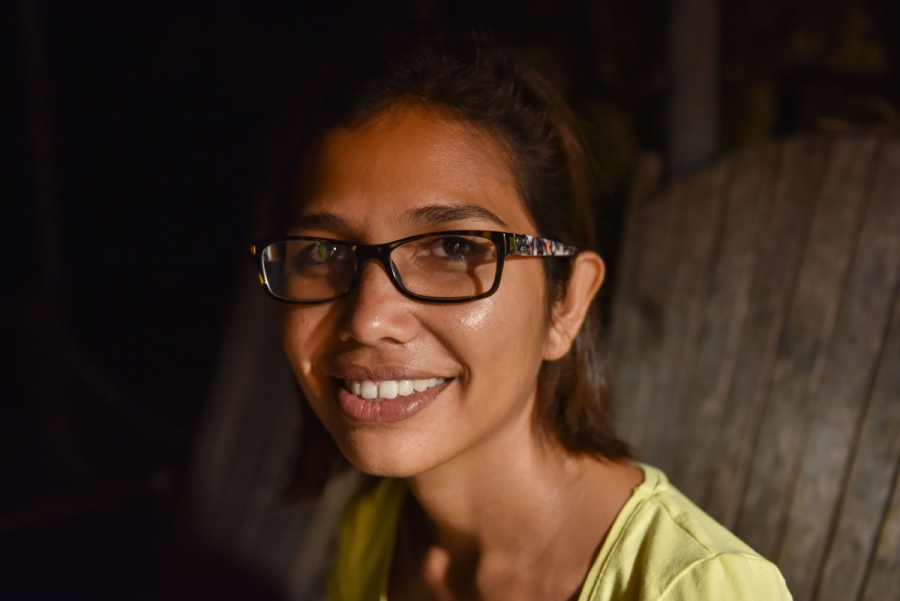 Balqis Natasyrah is the owner and operator of Casa Nemo Resort and Spa in Sabang, Pulau Weh island, Indonesia.

Natasyrah’s "house" is the Casa Nemo Beach Resort and Spa on the island of Pulau Weh, just 45 minutes by ferry from the provincial capital of Banda Aceh. Casa Nemo sits on a hillside of coconut trees, hammocks and birds-of-paradise, overlooking an emerald sea. Natasyrah owns the resort with her husband, a European irrigation engineer.

Natasyrah says she loves her faith, but she finds the tightening regulations of Sharia law too restrictive, especially towards women. 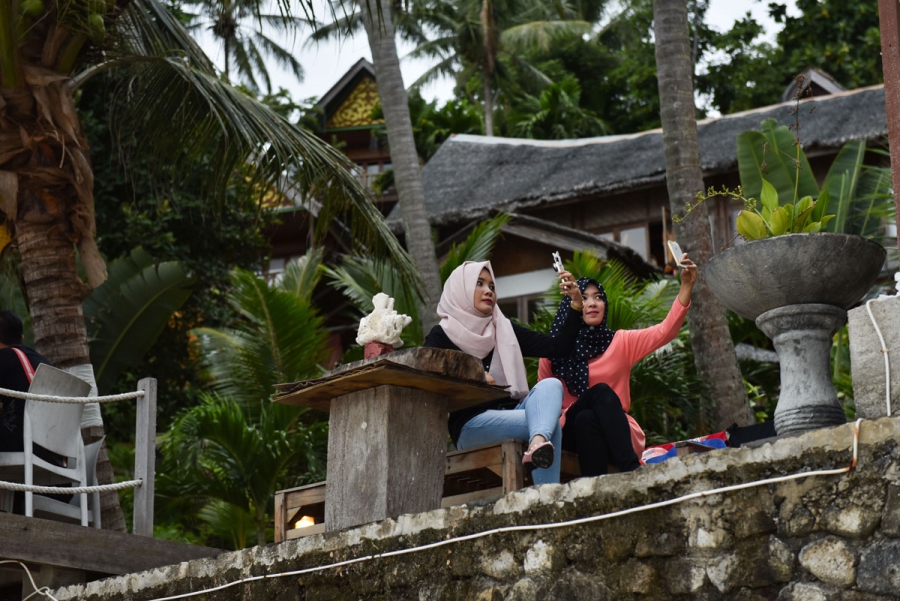 Women in hijab take selfies on their mobile phones at Casa Nemo Resort and Spa.

“In Al-Quran, in Islam, it says, ‘the paradise, it’s below your mom’s feet’ — so the paradise (is) below women’s feet, and I think that’s very nice. It’s not below your husband’s feet or below your father’s feet,” she says.

Natasyrah mostly employs single moms, offering free English classes to them and to their children on weekends.

Step into this story

Meet Lisa — a single mom and spice-seller. Help an up-and-coming businesswoman like her with a loan on Kiva: a respected non-profit that lets you make small loans to help others rise out of poverty.
Lend $25 to a businesswoman

“I had a problem working with men, because they never listened to what I said. Since I changed with more women, it’s much easier to work,” she says. “And they work hard.”

She says before, the women were stigmatized. Now they have an economic foothold.

“They can buy a motorbike. They are so proud of themselves. They go home. They can sit down with everybody, and I’m happy to see that.” 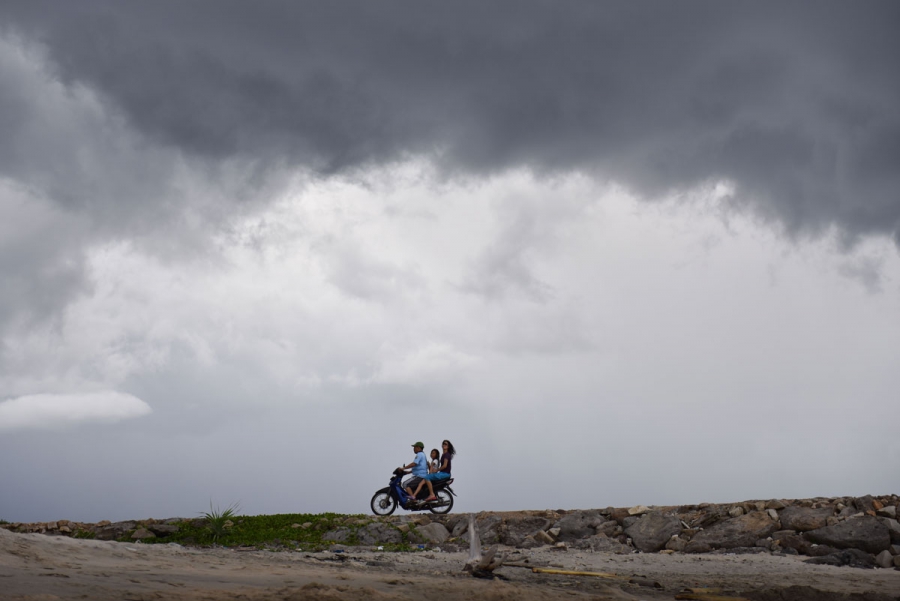 A man, child and woman ride a motor bike near the beaches of Pulau Weh island, Indonesia.

Religious authorities in Aceh stress that their version of Sharia law is collaborative and gentle, especially when compared to stricter interpretations in the Middle East.

AWL is #OwningIt in Kenya

Follow along with Marco Werman and the Across Women's Lives team as they report on women and economic power from Kenya.

Whether it's livestreaming with female safari guides on Periscope, audio portraits of the women we meet on Instagram or behind the scenes fun on Snapchat, find them as @womenslives across all platforms.

“The objective of the law is not to penalize people, but to give education, to protect, to guarantee people’s rights so that their lives are better,” says Syahrizal Abbas, head of the Sharia Council in Aceh.

Abbas says men and women are equal under the law, but because women are physically weaker than men, “they need more protection.”

Casa Nemo’s 21-year-old receptionist, Fajri Sabri, is among those who fear living on the mainland now. He’s gay, and he says the resort represents an oasis. “I really love this place, because in this place I can be myself. Even the owner is like, ‘Oh, FJ, you just be yourself.’”

Sabri was recently crowned as the island’s tourism ambassador. Pulau Weh may be under Sharia law, but officials rely on tourism to fuel the local economy, so they turn a blind eye to some of trappings of the trade. Non-Muslims can order a cold beer at the bar, or wear a bikini down to the beach. 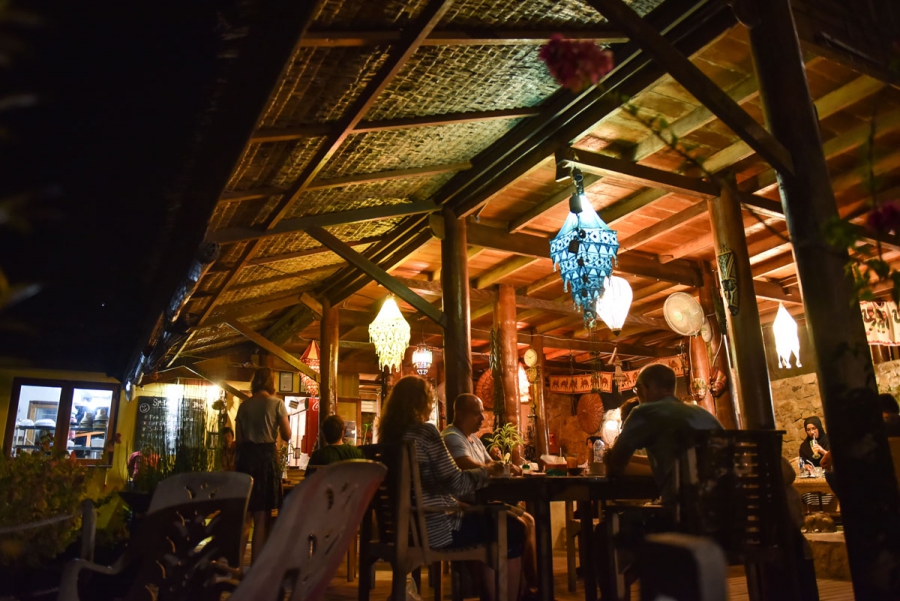 Locals and tourists dine at Casa Nemo Resort and Spa.

“These guys from the Sharia police office came down and said, ‘You should stop this. You should stop the band,’” Natasyrah says. “And after two songs we stopped the band. All my guests were saying, ‘What’s going on?’” Then, locals raided the party and dispersed guests.

Natasyrah is not sure how much more Sharia law she can take. If the laws become too restrictive, she says she may focus exclusively on Muslim guests, leaving the resort in the care of a manager.

She adds, “Because I think our mind is like a little parachute, no? And if you don’t open the parachute, then you’re going to die.”

Natasyrah eats a hamburger and wanders off to mingle with guests. For now, she says, her dream has come true. She opened her mind, and she got Casa Nemo.

Ruth Morris and Carey Wagner reported from Indonesia with fellowships from the International Reporting Project.