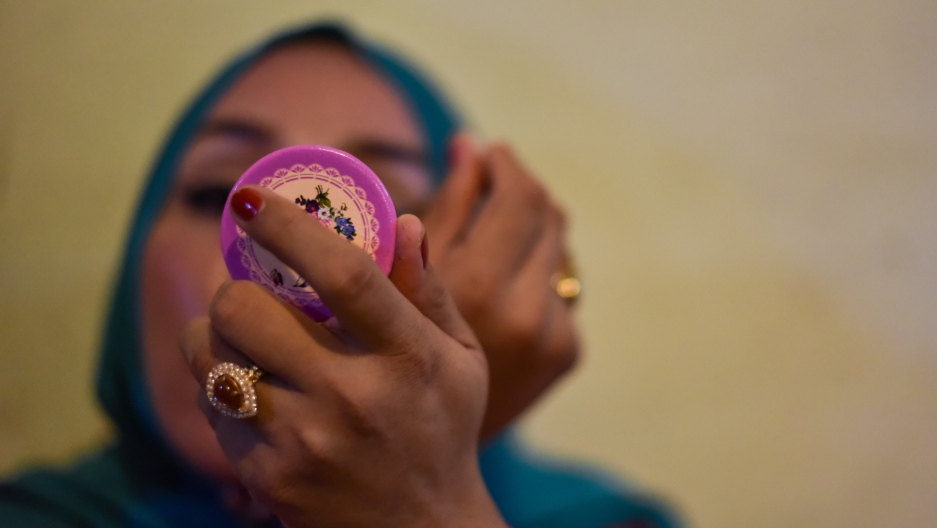 Echa wears the hijab because it's the law for women in Aceh. Echa is transgender, and when she wears the headscarf, she says no one calls her names.

Indonesia has been called the smiling face of Islam for its moderate religious bent. But for Echa, an LGBT activist in the northern Aceh province, that smile can be deceiving.

New regulations in Aceh now punish gay sex with fines, jail time, even canings. It’s the latest phase in a gradual rollout of Sharia laws that also prohibit unmarried men and women from riding on a moped together, or holding hands in public. Gambling is not allowed either, and all Muslim women must wear the traditional head covering known as hijab. It’s the law.

Rights groups have decried the new laws as inhumane and unconstitutional. The Indonesian government handed Aceh a unique allowance to implement Sharia law 10 years ago as part of a peace deal with separatists. Gay sex is not illegal in the rest of Indonesia.

“The private space for LGBT will be invaded,” says Echa, of the new provisions that went into effect in late October.

“I believe Islam is very tolerant on these issues,” she adds. “I believe in God, and God loves. Those who cast us out aren’t God.”

Echa (that’s not her real name. She asked that we use a pseudonym to protect her identity) is a transgender woman who wears a floor-length pink dress and a turquoise headscarf. Not a wisp of hair is showing. She has her own reasons for wearing the hijab: It’s respectable.

“I don’t want the image of transgender people to be associated with prostitution,” she says. Plus, in Aceh’s conservative religious climate, she almost never gets called names as long as her head is covered.

Echa heads the local chapter of Violet Grey — an LGBT advocacy group — and also works as a modeling coach.

On an evening drive through the capital Banda Aceh, the coffee shops are brimming with young people on plastic chairs. There’s no alcohol here, so coffee is king. Echa points out a hotel that used to be a hangout — no more.

Then we pass a street Echa says used to be a “hotspot,” a meeting place for gay and transgender people. Tonight it’s dark. The storefronts are shuttered.

Syahrizal Abbas, director of the local government’s Islamic Sharia agency, says the Sharia regulations were meant to guide people towards a more devout life, not terrorize them. He takes pains to stress that Aceh’s version of Sharia law is moderate — nothing like the Sharia practiced by extremist groups like Boko Haram and ISIS.

“We want good Muslims in Aceh,” he says.

But he’s fully behind the new law that punishes gay relations with up to 100 strokes of the cane. Adultery carries the same penalty.

Abbas argues that gay couples actually enjoy more freedom than unwed straight people in Aceh. Unmarried heterosexual couples can’t be alone together, and they can’t touch in public. But for gay men and women, such behavior is permitted.

The problem, he says, is if the couple engages in sex.

At a small hair salon, Echa greets friends who are also nervous about the new law. As they compare selfies and watch soap operas on TV, a gay man who calls himself Mulan says the tightening restrictions make social media more important than ever. Platforms like Blackberry messenger offer the safest way to socialize.

Echa’s home is also a kind of safe haven. There’s a row of lockers in the entryway. Her house is open to students, friends, and runaways. Some members of the local LGBT community have left Aceh for Jakarta; Echa refuses to go.

“We have to have a strategy to ensure that we stay strong and solid. The important thing is for us to survive, even if we need to go further underground,” she says. Then she adds, “We must take a step back and go along with the game, go along with what is wanted.”

Ruth Morris and Carey Wagner reported from Indonesia on fellowships from the International Reporting Project.