It's Thanksgiving! Atime of family traditions. Long drives, deep brines, and new belt notches. And, inevitably,NormanRockwell's "Freedom From Want." You know, the one with the turkey.

We had aginormous Norman Rockwell book in house, a tome you you could sink into. So when I thought of Thanksgiving, I always thought of "Freedom From Want."Itwas our quirky, arty family thing. So I was surprise to learnthe whole world felt the same way about the Rockwell painting.

Tylenol's brings everyone in for the Rockwell
(Studio360 / Sideshow)

"Freedom from Want," part of Rockwell's Four Freedomseries, isAmerica'sMona Lisa, a Hallmark card seared into our nationalDNA. And every yearit gets remixed. Might I add that the meme started before Twitter? Tumblr? The internets themselves?!

The backstory: It's 1941, andPresident Franklin D. Roosevelt has just givenhis State of the Union address. In that speech, Roosevelt outlined his famous "four freedoms":freedom of speech, freedom of worship, freedom from want, and freedom from fear. Rockwellhears the speech onthe radio. Inspired, he "bolts" out of bed tostart drawing, then hops on a train toWashington, ready to put his art in service ofthe war effort. But when Rockwell arrives, the clerk rejects him. No illustrators. LuckilyThe Saturday Evening Post wantedthe drawings. Andguess who had a change of heart? Uncle Sam. The Four Freedoms eventually helped raise $132 millionin bonds towards squashing the Third Reich.

But then how did Rockwell's Turkey Day image become iconic while the others are merely famous? Any of Rockwell's images could have gone gangbusters,but this was the one. At the time, the illustration must haveseemedover the top: an overabundance of food at a time of austerity.Maybe that's what's sparked politicalillustrators, artists, and TV shows to insert their imagesinto Rockwell's world. It's humorous and wholesome, and we love it.

When you didn't playtheAdeletrack in time.

What's most surprising is how true everyone stayed to the composition here.

...and one for the Rugrats faithful. 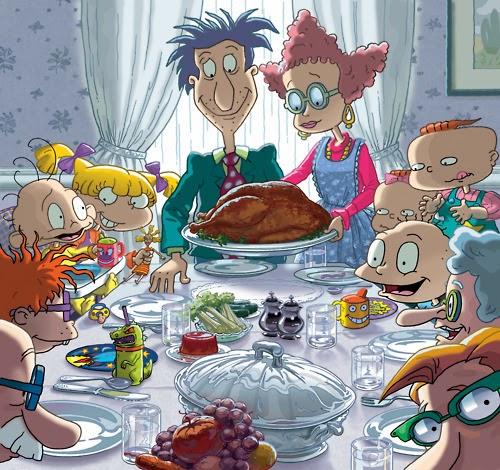 Really, there are justso many. It seems there's a "Freedom from Want"foreveryconceivable home, cultural scene, or imaginary universe. Still don't see yourself represented? (We found a surprising dearth of nontraditionalgenderroles or families of color.) So make your own. Don't worry, this meme's not going anywhere soon.

Want to see more? Istarted a Rockwell Remix Tumblrjust for you.

Happy Thanksgiving, one and all!

Remember to chip in this weekend!
(Giphy)