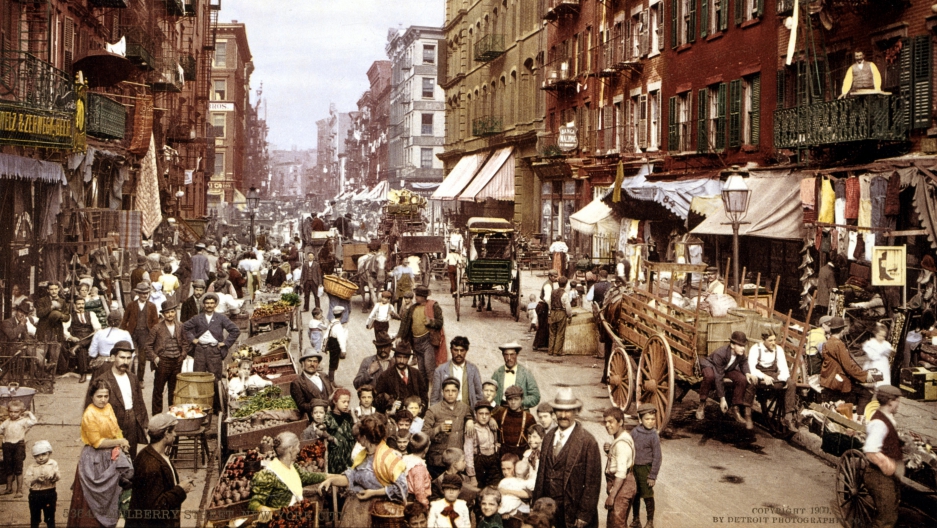 The current debate over whether to accept Syrian refugees has echoes of a different time when another wave of people were leaving a Mediterranean country. They were seen by some Americans as being so alien in religion, culture, education, politics and law, that they could never be assimilated. They were even suspected of ties to terrorism. These were the Italians.

On March 14, 1891 one of the worst mass lynchings in US history occurred, in downtown New Orleans. Eleven men were hung or shot to death by a mob seeking ‘justice’ for a murdered policeman. The victims were all Italians.

The case was not isolated. All five Italians living in Tallulah, Louisiana, were lynched in 1899 after a disagreement over a goat. In all, about 50 lynchings of Italians have been documented in the period from 1890 to 1920.

This kind of violence shows the animosity felt by some Americans toward Italians at this time. But prejudices appear to have been acceptable in polite circles as well. In response to the New Orleans lynchings, the New York Times wrote in an editorial:

"These sneaking and cowardly Sicilians, the descendants of bandits and assassins, who have transported to this country the lawless passions, the cut-throat practices, and the oath-bound societies of their native country, are to us a pest without mitigation. Our own rattlesnakes are as good citizens as they…  Lynch law was the only course open to the people of New Orleans to stay the issue of a new license to the Mafia to continue its bloody practices."

The reporting of the story and the editorial make for very uncomfortable reading today. If you have a Times subscription, you can see the original editorial here (Page Four, Column Three)

A more liberal view came from the Rochester Union Advertizer, which found "the whole affair deplorable. ... We are not unfriendly to the men of any foreign land who come here to be Americanized, and all we ask is that they shall not bring murderous plots and vendetta along with them.”

Incidentally, the word Mafia first becomes widespread in English in the aftermath of the New Orleans incident.

Richard Gambino, former director of Italian American Studies at Queens College, in New York, wrote a pioneering study of the Italian American experience in 1974. It’s mostly positive, but the legacy of discrimination and stereotyping remains heavy.  He writes how in the aftermath of the New Orleans tragedy that: "Americans debated whether all Italian-Americans were somehow all disposed to criminality by their genetic endowment or cultural inheritance."

These are the bare facts: Italians started migrating to the United States in large numbers in the 1880s, and the migration grew steadily down to 1921 when Congress passed a law to restrict immigration. About 80 percent of them were from the impoverished south of Italy or from Sicily. Only about 50 percent were literate. And only about 30 percent were women. Mostly these were men coming for work, hoping to make enough money to go home and buy their own farm. Numbers are hard to estimate, because so many men did return home, but it’s in the region of 4 million.

The immigrants were portrayed in parts of the media as ignorant, insular, superstitious, lazy, prone to crime, ignorant of the law, ignorant of democracy and prone to righting wrongs with personal vendettas and acts of violence. Even their food was seen as alien. One popular book published in 1907 stated baldly that “immigrants from eastern and southern Europe are storming the Nordic ramparts of the United States and mongrelizing the good old American stock."

More: Another time in history that the US created travel bans — against Italians

Their form of Catholicism was also seen as different. All Catholics faced prejudice in America, but in the Mediterranean, faith was blended with other kinds of beliefs, some of them pre-Christian, such as belief in the evil eye, and in good and evil spirits. The Italian Festas — annual public celebrations and parades of the saints — were also glaring novelties at the time.

Modern research has found that there was no basis for any of these prejudices. Italians appear to have been as productive as any other workers. Police arrest records indicate nothing unusual in the number of Italians involved in crime.

And yet they faced discrimination in housing and employment, police brutality and so on.

Then there were the suspicions about ties to terrorism. Anti-capitalist anarchism was widespread in the late 19th and early 20th centuries, and in the popular mind it was closely associated with Italians.

One leading guru of violence, or 'propaganda by deed', was the charismatic Luigi Galleani, who lived in the US for about 20 years until deported. His followers were blamed for dozens of bombings of police stations, courts and other public places; and shootings of policemen, judges, businessmen and others.

One radicalized New Jersey boy went off to Italy to assassinate King Umberto, in 1900.

The worst incident laid at their feet — although never proven — was the Wall Street bombing in 1920, which resulted in 38 deaths and more than 140 people being wounded. It was the worst act of terror in the US up to that point in history.

In the crackdown that followed, there were thousands of arrests, and about 500 people were deported, mostly Italians.

But the numbers involved in terror were tiny, compared to the 4 million immigrants, almost all of whom of course became loyal hard-working citizens, despite the hostility they faced. And there were anarchist terrorists with German, Polish and English names as well.

Prejudice and discrimination against Italians died a slow death — some argue it persists in subtle forms to this day.

But obviously Italians did assimilate, and today it’s hard to imagine America without the Knights of Columbus, the Sons of Italy, and of course, pizza.

Italian Americans also served heroically in America’s wars. In fact, in World War I, Italians made up an estimated 12 percent of the men who joined the US military — despite being a much smaller proportion of the population.

It’s all food for thought when we consider the next wave of migrants.

Next: Why this musician wants to understand xenophobia today by remembering the past