The first time Zain Alam’s music video was screened in public, at a symposium hosted by the South Asian American Digital Archive (SAADA) in Philadelphia in April, an elderly Sikh woman approached him in tears.

Alam was nervous. He had created the music video as part of the "Where We Belong: Artists in the Archive” project, an initiative to encourage artists to use SAADA’s collection — photographs, videos, letters and publications that date all the way back to the late 1800s — to create works that bring to life histories often overlooked by cultural heritage institutions.

For “Lavaan,” Alam, the musician behind the band and recording project Humeysha, edited together clips of Sharanjit Singh Dhillonn’s silent home movies of his family living in Norman, Oklahoma, in the 1950s and 60s. He composed a score to accompany it. The videos were donated to SAADA by Sharanjit’s daughter, Bibi Dhillonn. So when he saw the Sikh woman approaching, Alam was worried he had accidentally misrepresented her culture and her story in some way.

“But then she told me that the way I cut between scenes of the house to the birthday party in the park in Oklahoma, to the scene when the mother is trying to put the bindis on her daughter, reminded her of her own childhood in the Midwest,” Alam recalls. “And that she hadn’t connected with anything that had taken her back to her childhood as much as she had with this video. It made it that much more emotional. She was crying, and I was starting to tear up too.” 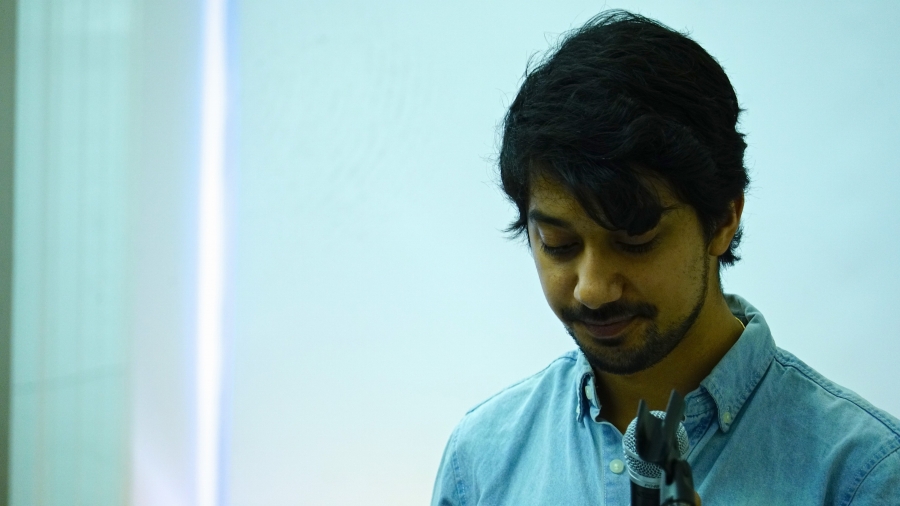 Zain Alam, of the band Humeysha, shared the video he created using a family’s home movies at the South Asian American Digital Archive’s “Where We Belong” event in Philadelphia in April 2017.

Saturday is the fifth anniversary of the Oak Creek tragedy in Wisconsin, when a white supremacist targeted a Sikh temple, killing six worshippers and wounding four others.

As an alternative to attending public vigils to commemorate the lives lost that day, SAADA is encouraging people around the country to host their own small, intimate “Where We Belong” community gatherings of five to 10 people, where they can show Alam’s “Lavaan” and works from other artists.

The event kit includes a DVD and a 90-minute program, including art-making activities and discussion topics for group reflection. The director of SAADA, Samip Mallick, says 15 of these gatherings will be happening on Saturday, from California to Tennessee to Ohio to Washington.

“It’s the first time we’re doing this,” says Mallick. “We wanted to take this meaningful conversation and moment in Philadelphia and share it across the country in people’s living rooms. Because these are conversations we don’t often get to have in our daily lives, and it’s different to have these discussions with people you are already close with and feel comfortable with.”

“Sometimes people think of archives as being dusty, unorganized, hard to pore through, and just for scholars and historians,” says Alam, who is also a graduate student in Islamic Studies at Harvard University. He has also worked with the 1947 Partition Archive based in Berkeley, California. “If you take artists who are trained in making things that are beautiful, and you encourage them to go through the archives and create works they’re inspired by, there’s no better way to connect to people’s emotional worlds, and also connect that back to something grounded in reality that has resonance in the present day.” 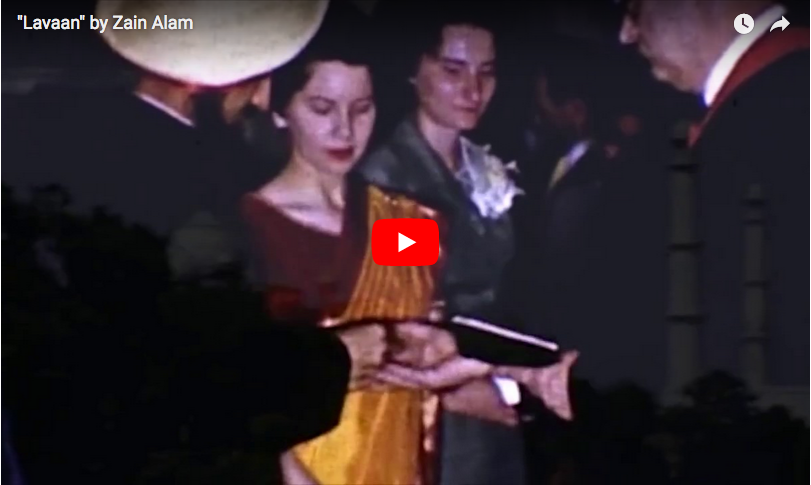 Zain Alam presents “Lavaan” at an event in Philadelphia on April 8, 2017.

Alam grew up in Georgia, in a mostly white community. He was entranced by the archive's footage of Sharanjit Singh Dhillonn’s 1959 wedding to a white woman, Dorothy Dhillonn. The couple met as students at the University of Oklahoma. That footage opens the music video.

“It almost didn’t seem real,” says Alam. “Like it was a miracle that this [marriage] could have happened so long ago. But it wasn’t a ‘miracle.’ It could also be described as just a very normal American community in Oklahoma where two people fell in love.”

Alam researched Sikh wedding traditions and learned about the prayers and songs, called lavaan, that are recited at Sikh ceremonies. As a musician, Alam is influenced by both Bollywood music and American hip-hop, often assembling, sampling and remixing elements from lesser-known sources. A remix of one of his own songs that he hadn’t yet released happened to be in the same key and rhythm as the lavaan melody. So he played that melody on his guitar and laid it over his own track.

“Like many people with home videos, once they had kids, [Sharanjit] took lots of footage of his children learning to walk for the first time, falling down and getting back up,” says Alam. “And at first, I thought, ‘Oh God, why are they recording this so many times? Why isn’t there more footage of the wedding?’”

But eventually, Alam grew fond of these everyday scenes. He juxtaposed the images of the kids falling with images of television headlines reporting hate crimes against the Sikhs in America that keep coming back in the news, again and again.

“There’s a moment in the video where the footage goes from color to black and white, the Sikh prayer fades out, there are these sorrowful bells, and you see that the father’s hair has been cut off,” says Alam. “And it turned out that [Sharanjit] got rid of his hair and beard because he was attacked at a gas station in Oklahoma.”

According to an oral history from Dorothy and Bibi Dhillonn, the gas station owner refused to help Sharanjit or call the police after the attack. The biographical sketch accompanying the footage donated to SAADA describes how Sharanjit cried when he cut off his hair. He did it only because he felt unsafe and that his turban was making it difficult for him to find work.

“To me, the greater narrative of learning to walk, getting up and falling back down again connected heavily with present moments where the Sikh community has been targeted since 9/11,” says Alam.

“In some ways, ‘Lavaan’ is exploring this promise of a multicultural and pluralistic America that has not been kept,” says Mallick. “Because we’re still seeing these incredibly xenophobic incidents.” He recalls not just the massacre in Oak Creek, but the February shooting of an Indian engineer, Srinivas Kuchibhotla, in Kansas, and the March shooting of a Sikh immigrant in the state of Washington. 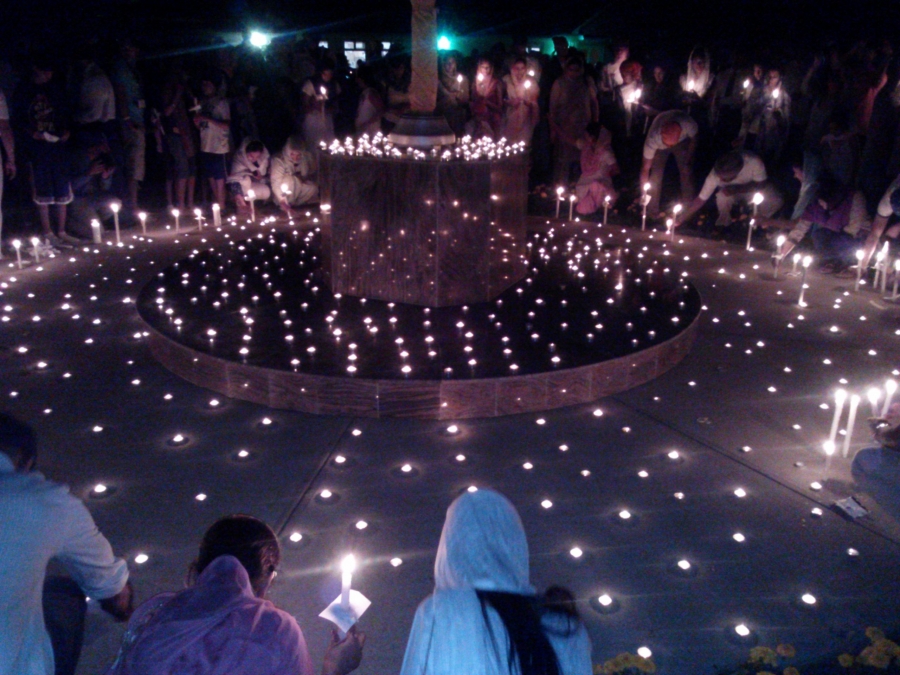 Vigils were held across the country after a mass shooting at a Sikh gurdwara on Aug. 5, 2012. This one was held at the Palatine Gurdwara in Chicago, Illinois the next night.

Alam describes the shock he felt after hearing about the Oak Creek shooting for the first time, especially because he has family members in Wisconsin.

“Because people in the Sikh community cover their heads and have facial hair, they’re targeted more than the rest of us — even more than Muslims sometimes — so there’s some degree of specific anger, empathy, rage and sadness that comes when I hear about these incidents happening,” he says. Alam is Muslim and his parents are from Pakistan.

It was during the months right after Trump was elected last year, when hate crimes against minority communities were increasing, that Alam started working on the “Where We Belong” project.

“It was a hard time for a lot of us from these parts of the country,” says Alam, speaking about the American South and Midwest. “But looking at this footage [of the Dhillonn wedding], it made me feel like America has been great for much longer than a lot of us would think. It’s easy for us to say we’ve progressed so much since the 1950s, but often it feels like we’re taking two to three steps forward and then six steps back. And maybe in some places like Norman, Oklahoma, maybe there were aspects that were better to immigrants, before people got caught up to this degree of national xenophobia that can now catch fire so quickly on social media and spread.”

“I’m not saying that as a commentator, but as an artist,” he says. “And if this video raises these types of questions, then I’m happy.”