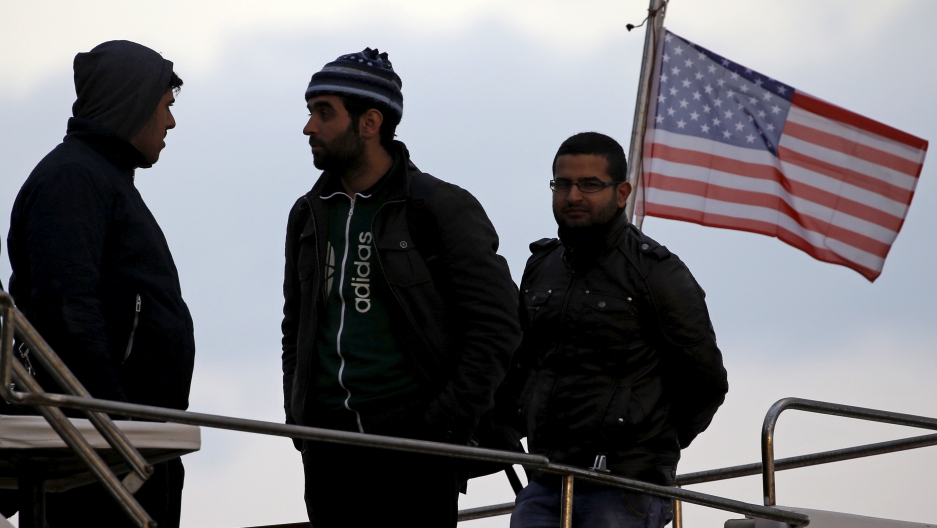 Syrian refugees wait to disembark from a luxury yacht used by about 250 Syrian refugees to travel across the Aegean Sea from the Turkish coast in the Greek island of Lesbos. Balkan countries have begun filtering the flow of migrants to Europe, granting passage to those fleeing conflict in the Middle East and Afghanistan but turning back others from Africa and Asia, the United Nations and witnesses say.
Credit:

How much do you plan to spend in the coming Thanksgiving weekend? According to the latest research from Deloitte, Americans plan to spend $369, almost 25 percent more than last year.

How many Syrian refugees has the US accepted? From 2011 to November 24 this year, the total number is 2,283, according to the US Refugee Processing Center. President Barack Obama has pledged to accept another 10,000 Syrian refugees in 2016 despite stong objections from the Republicans.

So what is the relationship between Thanksgiving spending and Syrian refugees? The chart below explains it.

Note: The estimated five-year cost to resettle a Syrian refugee in the US is $64,370, or $12,874 a year, acccording to the Center for Immigration Studies, a think tank that advocates immigration reduction in the US. The cost was estimated in a study to prove that relocation of Middle Eastern refugees to the US is a costly effort.

Now you get it. Apologies for the ridiculously long chart.

The objection against accepting Syrian refugees gained significant momentum after the terrorist attacks in Paris on the night of November 13 that killed 130 civilians. Critics of Obama's refugee policy were afraid that the increase of Syrian refugees in the US could lead to more terrorism in the country.

But the fact is, people are already dying in Syria, and the death toll is way beyond any terrorist attacks that we have seen. Here's another ridiculous chart.

RELATED: 6 groups you may not know that are doing important work with Syrian refugees