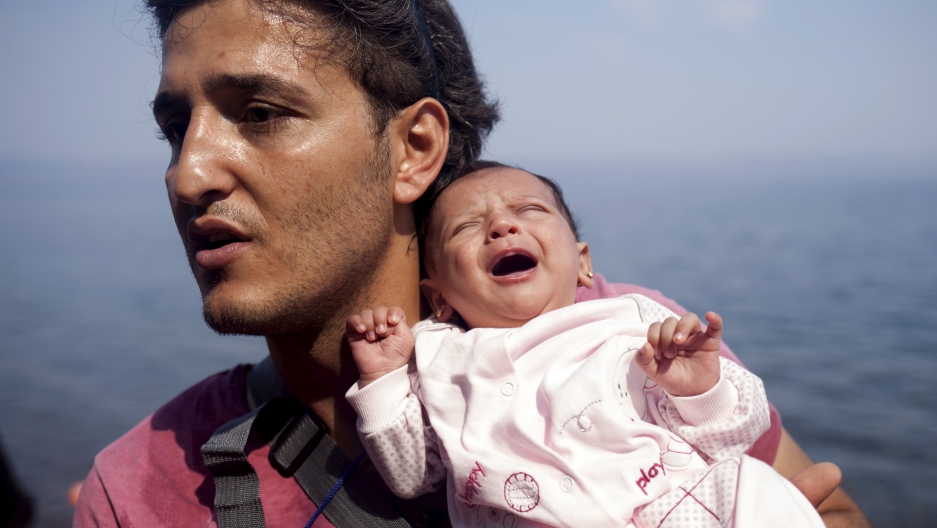 A Syrian refugee from Aleppo holds his one month old daughter moments after arriving on a dinghy on the Greek island of Lesbos, September 3, 2015.

EDITOR'S NOTE: The information in this article has been adapted for Thanksgiving in an app that sends you to the various vetted charities mentioned in this article.

The fate of refugees in Europe has gripped the world’s attention following the publication of the image of the body of one victim: a 3-year-old Syrian boy washed up on a Turkish beach.

When confronted with this latest “viral” image to come out of the Syrian conflict, many people have expressed shock, horror, grief and anger. And many have also tried to help.

See also: If you've been moved by images of Omran Daqneesh, the young boy pulled from rubble, here are some organizations working to save people in Aleppo.

Migrant Offshore Aid Station, a charity that runs a fleet of rescue boats to save refugees at sea, told the Guardian that their donations had increased 15-fold in the 24 hours since the photo was published. Dozens of independent online fundraising efforts sprang up overnight, and calls to give or sign petitions began to trend on Twitter and Facebook.

But who to give to?

There are many well-established charity organizations helping the thousands of migrants flooding into Europe, most of whom are fleeing violence in Syria and Afghanistan or the brutal oppression of Eritrea’s dictatorship. The big charity groups are well-known: UNHCR, Unicef, Médecins Sans Frontières/Doctors Without Borders, Oxfam, the International Red Cross and Save the Children.

But there are other, smaller groups doing incredible work on the ground, every day. Here are six, smaller groups we’ve vetted that you can help right away. Suggest other groups in the comments or in our Facebook chat.

This charity exists to save children like Alan Kurdi, with a fleet of rescue boats patrolling the Mediterranean to save migrants lost at sea.

Dubbed as a kind of “Airbnb for refugees” this German nonprofit matches people with spare rooms with refugees in need of housing. If you don’t have a spare bed in Germany, you can still donate here.

3. The Worldwide Tribe in Calais

Provides classes and cultural enrichment and scholarships to Syrian children in Turkey.

A US-based charity that works in Turkey and is also focused on educational opportunities for Syrian children, currently raising funds to rebuild schools in Syria.

6. Hand in Hand for Syria

One of the few organizations that directly provides aid on the ground in Syria, including food, clothing, water, sanitation and crucial medical assistance to “help people to stay in Syria instead of fleeing to another country.” They accept donations via their page on JustGiving.com.

Some suggestions from our reporter on the ground

- The White Helmets: Also known as the Syrian Civil Defence, these rescue workers are some of the first to rush in after the bombs land each day. They're credited with saving more than 22,000 lives so far.

- Watanili: This group is working to rebuild Syria through a series of small grassroots initiatves. A recent project of theirs, called 'Cinema on the Go,' included using film to combat the effects of trauma on the children there.

As for the bigger organizations, a useful tool to consider when evaluating them is their ranking on independent charity watchdog sites like GuideStar or Charity Navigator which evaluate what percentage of donations go directly toward aid versus overhead, among other factors.

Charity Navigator has a list of highly ranked charities currently helping Syrian refugees. We reached out to them to find out more about they are doing and will update this as we get responses.

International Medical Corps has had teams on the ground providing direct medical assistance to Syrian refugees in Iraq, Jordan, Lebanon and Turkey. One example of their work: In the Turkish city of Gaziantep, not from the war torn Syrian city of Aleppo, IMC helps run a service center for Syrian refugees that provides medical care, classes and job training.

IMC spokesperson Rebecca Gustafson says the group hasn’t seen any increase in donations to their Syria response efforts, but their “work to help those affected by the conflict continues and is more critical than ever.”

Medical Teams International focuses on health and dental care for Syrian refugees in Lebanon.  Their volunteers “monitor chronic disease patients in their homes and provide families and communities with vital information on chronic disease recognition, management and disease prevention.”

Mercy Corps  provides direct aid to Syrian refugees in the form of food and supplies, and by increasing access to clean water and sanitation, shelters, and safe spaces and activities for children

The charity provides emergency food for Syrian children, and supports education in Syrian refugee camps among other things.

While not directly related to their relief efforts, this poignant, and viral Save the Children PSA imagines a British child enduring an experience very similar to a Syrian refugee.

ShelterBox has been providing emergency shelter and supplies to families affected by the Syrian crisis in Iraq Kurdistan, Jordan, Lebanon and Syria, including clothing, stoves and, water filters.

Oxfam is provides aid to Syrian refugees in Lebanon and Jordan. In Jordan's Zaatari Camp, home to 83,000 refugees, the nonprofit provides clean water, sanitation services, and hygiene education to help ward of cholera and other intestinal diseases.

How come Saudi Arabia, Qatar and the UAE haven't accepted one refugee?

What do refugees carry on their journey?

CBC: Canada's top 'refugee' search - 'How can I sponsor a Syrian?'