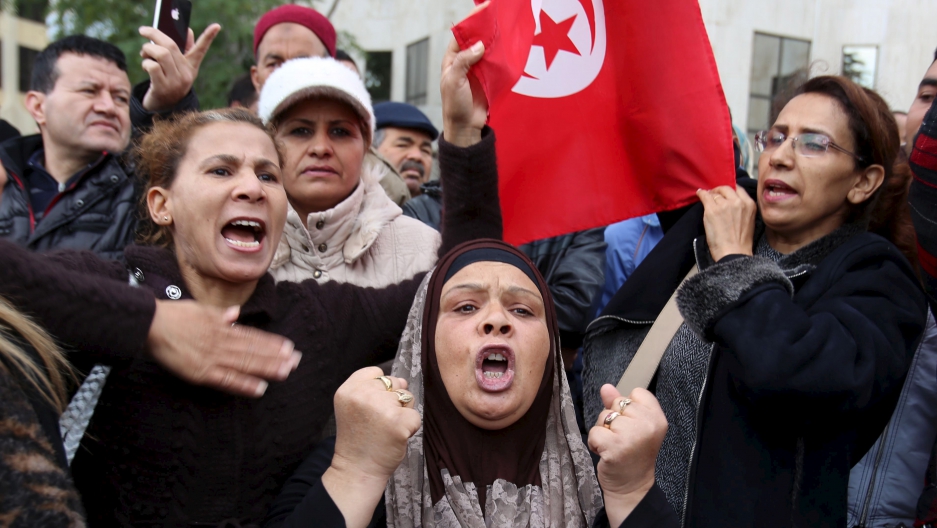 People shout slogans at a protest to condemn a suicide bomb attack in Tunis, Tunisia November 25, 2015.

Reporter Adnen Chaouachi just came back from a funeral for one of the 12 people killed by a suicide bomber on Tuesday. Dozens were injured.

Chaouachi knew many members of the presidential guard who were targeted in this latest attack. He's spoken to many of them in the course of his reporting.

"They are just brave Tunisian people," he said. "They go to work early. They feed their families."

He rattles off numbers about these fractured families: two children left behind, a pregnant wife, twin daughters — only a few days old.

In a statement, Tunisia's Interior Ministry said they found a 13th body on the scene, which is believed to be the "terrorist who caused the explosion." They added that DNA tests are under way to identify the attacker. 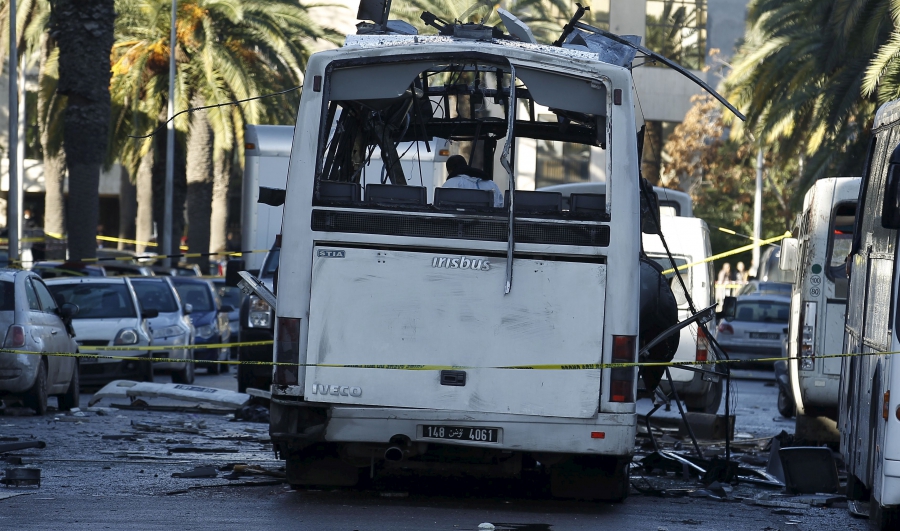 On social media, ISIS claimed responsibility for the attack.

It's been a particularly bloody year for the country, which is battling a surge of extremist violence. In June, a gunman killed nearly 40 people at a beach resort in the coastal town of Sousse. It's considered the worst attack in Tunisia's history. A few months earlier, in March gunmen opened fire on tourists in Tunis, killing 21 people.

Related story: Tunisian officials are tired of radicalization from within

Tuesday's attack was again in Tunis, the country's capital. In fact, the exact spot where the bomber detonated is extremely symbolic, says Chaouachi.

The bus stop where the presidential guard picks up and drops off its staff is near the former headquarters of former President Zine el-Abidine Ben Ali, who was deposed in 2011. It's also near Avenue Habib Bourguiba, which is where many of the protests calling for Ben Ali to step down were held.

location of the explosion of a bus transporting presidential guards in #Tunis, at least 11 dead & several injured pic.twitter.com/LFoXCnKsXr

"This attack is an evolution in the behavior of the terrorists. This time they attacked a symbol of the state and in the heart of the capital," Prime Minister Habib Essid told reporters after an emergency security meeting, according to Reuters.

Related story: Tunisian breakdancers view their activity as an alternative to radical Islam — but it doesn't always work

Soon after the attacks, Tunisian President Beji Caid Essebsi declared a state of emergency — the second one this year — and instituted a curfew from 9 p.m. to 5 a.m. Instead of immediately going home, Chaouachi said there were between 800 and 1,000 people on the streets until late, chanting that they would defeat terrorists.

In fact, Chaouachi's wife and son plan to go see a movie tomorrow, which he says is a political statement in itself.

"They use death," he said. "But we use art. We use culture. We use peaceful means."

World leaders have responded to the attacks, including French President François Hollande.

The White House also condemned the attacks "in the strongest terms" and White House National Security Council spokesman Ned Price said the US is prepared to assist Tunisian authorities in their investigation.