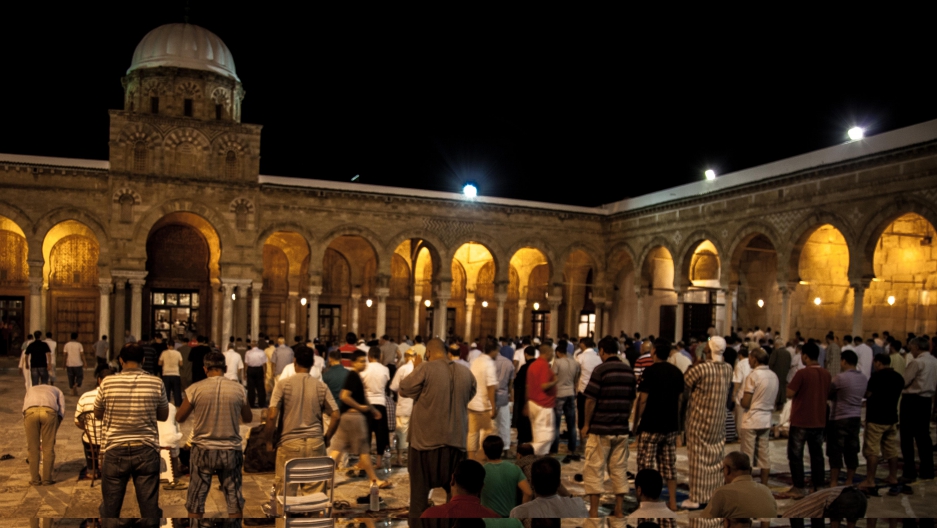 Congregants at the Zaytuna Mosque in Tunis recite the Quran.

Every night during Ramadan, hundreds gather for the reciting of the Quran at the Zaytuna mosque, the second oldest in North Africa. They sit and pray around 160 columns brought from the ruins of the ancient city of Carthage, on Tunisia’s coast.

Tucked in the old town of Tunis, the so-called "Olive Mosque" has shaped the brand of Islam embraced by most Tunisians for more than 13 centuries. The mosque hosted one of the original and greatest universities in the history of Islam, its influence stretching from Andalusia to Cairo.

You would imagine it's not the kind of place where anyone can just become imam. In January 2012 though, a hostile takeover swiftly dislodged the head of Tunisia’s most famous mosque in a matter of hours. A retired TV repairman moved in, changed the locks and started preaching.

“They assaulted the manager by force, took the old keys and occupied the mosque,” one of the shopkeepers selling birth and wedding gifts right in front of the mosque recalls. “Just like that, they declared themselves in charge.”

It was a high-profile case, but not an isolated one. Nearly 200 imams across the country were pushed out around the same time.

Fadhel Achour used to work at Zaytuna mosque until it changed hands. He went on to setup a national union of imams to report assaults against religious personnel. More than a thousand mosques were attacked in the months after the revolution, he says. That’s roughly one out of five mosques in Tunisia.

Imams were accused of being loyal to Zine el-Abidine Ben Ali, the deposed president. Achour says radical groups jumped on the chance to replace them. 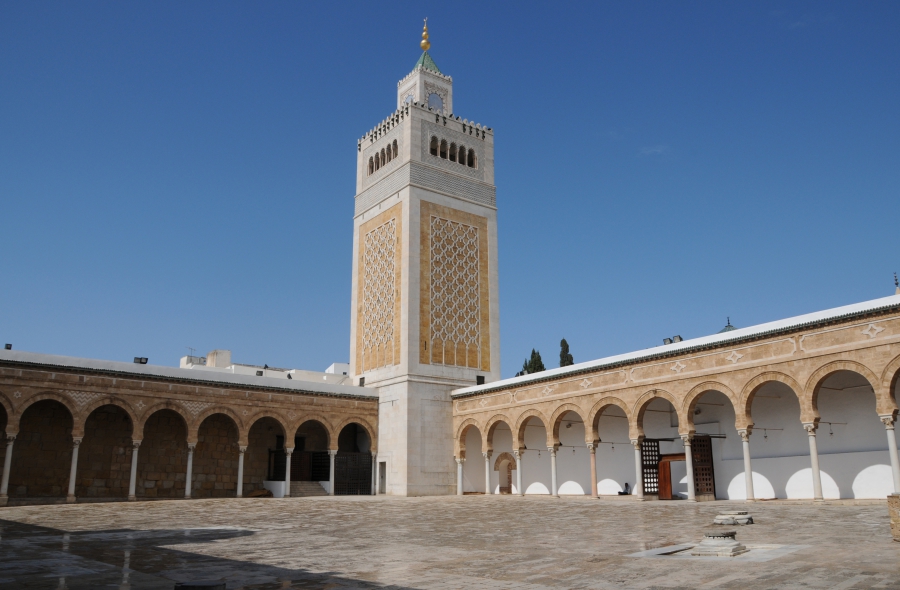 Minaret of the Al-Zaytuna Mosque in Tunis.

“From the revolution until the elections, you had a gap,” Achour explains, “a vacuum where security forces were not able to implement security measures inside mosques. This allowed these guys to take control. By the time the elections had come and security was more stable, the Ministry of Religious Affairs was just slacking in their work. They were not taking the necessary actions to protect their own imams.”

Anyone with money and a plot of land could build one, Achour says. Mosques started sprouting up across the country, but their locations weren’t random: “They set their mosques in new neighborhoods where mosques have not yet been built by the state,” Achour says. “Obviously these guys are very influential in poorer neighborhoods because it’s a lot easier to get to those young men who don’t have much. They convince them that all of this misfortune in life is due to them being far from their religion, that the right way to go is jihad and that everybody else who does not follow the same mentality are infidels.”

Scores heeded the message. According to Tunisian authorities, an estimated 3,000 Tunisians, possibly more, have left for Syria since 2012.

Mohamed Iqbal Ben Rejeb, the president of an organization helping families whose relatives have gone to fight, says most were radicalized inside mosques, in plain sight — not hidden away in front of their computers.

“Since the revolution, imams have been on the loose, and look at the damage!” he says. “Thousands in Syria, hundreds of dead. These imams and all the politicians who let them preach are sending their children to good schools in Europe or in America. Meanwhile, they’re pushing normal young citizens to wage a war that’s not ours. Yet until this day, not a single one of them has been put in jail for their crime. That’s what angers us most: to see that those who turned our youth extreme, they’re still free.”

A secular party, Nidaa Tounes, came into power last November. At the Zaytuna mosque, the self-proclaimed imam was forced to leave, three years after his takeover. But in lesser known, and more radical mosques, Iqbal says many remained.

The two recent terrorist attacks, at the Bardo museum in March and on a beach of Sousse in June, have put more pressure on authorities as gunmen of both massacres are thought to have attended these illegal mosques. Tunisian government announced the closure of 80 mosques believed to be hotbeds for radical groups shortly after the latest attack that killed 38 Western tourists.

In a small town near Sousse, police moved in recently to stop one hardliner from preaching. Hundreds took to the streets to protest his removal.

Fadel Achour, who used to work at the Zaytuna Mosque in central Tunis, says clamping down on radical preachers will anger and marginalize their followers, but the priority is to stop their recruitment campaign.

“If these guys are all meeting in secret places, that’s fine,” Achour says. “They’d be meeting on their own. The thing that a mosque provides you that secret hideouts wouldn’t, is a place to preach from, is a place to recruit from. Whereas, if they’re sitting in some secret homes, the only people who are gonna join you there are people who are already with you. So the idea of recruitment, then that’s it, that’s over, and that’s what we’re trying to stop.”

No one wants imams to be forced to read from prepared government scripts, like the old regime used to do. But Achour and others say there should be red lines, like enticing young people to kill, or lose their own lives, in Syria — or on a Tunisian beach.