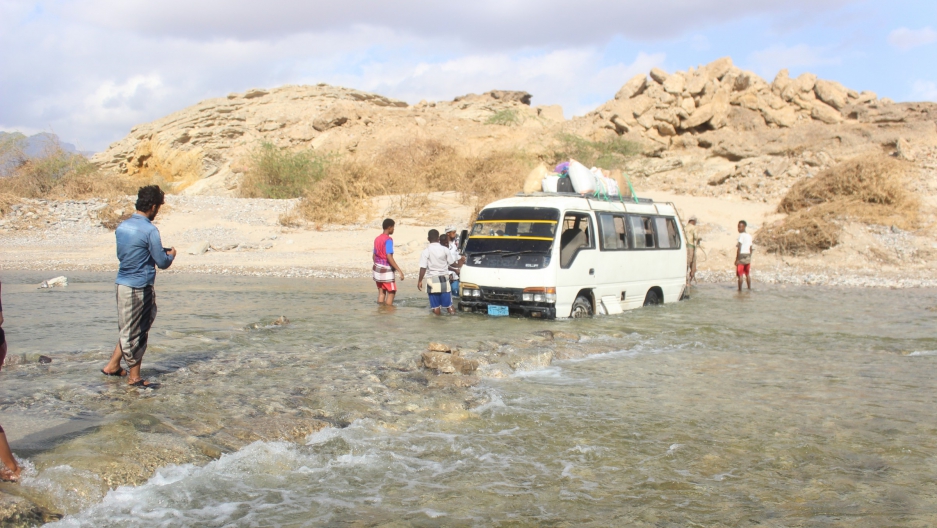 Near Al Mukalla, Yemen, where people were isolated by heavy flooding from Cyclone Chapala

Rarely do we hear first-person accounts from Yemen, let alone the isolated Hadramout province in the eastern part of the country. That is one of the reasons that the human toll of Cyclone Chapala was underreported when it struck Yemen at the beginning of November.

Abdullah Nasser Alseele (عبدالله ناصر السييلي) is a young photojournalist and resident of Al Mukalla who witnessed Chapala when it struck his city on November 3. He wrote this account of the violent storm in a series of tweets, translated into English and shared with his permission.​
- Stephen Snyder, The World

By night, the winds got stronger and wilder like never before. The howling winds were very scary. The wild sounds and fierce strength of wind and heavy rains sent everybody into their homes hiding. People were absolutely shocked and scared to their bones. The wind’s direction was towards the homes. Homes were flooding with rain. People used to collect the water from the rooms and disperse it outside. Water was entering from every hole or scratch in the walls, ceilings, windows or doors.

I was dispersing the water from my house and when the wind howls stronger, I go into hiding. The sounds were terrifying.

When I peeked outside, I was horrified with what I had seen. Everything was flying. The wind was carrying everything, even roofs of homes. It was a terrifying night, I felt my house was going to get carried away by the storm. The scary sounds of wind deprived us of our sleep. The storm stayed all night, and we didn’t sleep until the early hours of the morning when the winds calmed down.

In the morning, I went out to see the size of damage outside. The top floor of my house was without a roof. The rooms were full of water — you could swim inside. The floods were everywhere in the city. Everything the wind carried away was there, on the roads and streets floating and carried away by the flood. People were trapped in the floods. Some were rescued, but others I saw weren’t.

I couldn’t believe what I was seeing. A real catastrophe. It was surreal. So this is the effect of a cyclone? I was shocked. Many houses were completely destroyed, others had entire floors gone. People were cut off and aid/help was unable to reach them. Some are still trapped till this day with no access. How are people going to eat? How will aid reach them? The days of both cyclones were unreal. Schools, Universities, Governmental buildings, private businesses all closed because of the damage.

There are no routes for the flood to pass towards sea/river or even desert. The water is just sitting there, people are still trapped, homes gone and people are hungry until this moment.

There is no authority on the ground because of the war. No government, no public defense, fire brigades, police, rescue teams. There is no state. We are cut off from the world. Mahmada village, west of Mukalla (the capital of Hadramout), is a catastrophe zone according to its directorate. It has been cut off from the areas around it for 12 days now. The cyclones cut off the only road connecting it to other cities/villages. All houses destroyed, and damage is valued at tens of millions. Houses, cattle, farms, water/electric/communication networks and other belongings like vehicles. One person was killed, and 1300 villagers are all homeless, with nothing to eat or wear and unable to relocate.