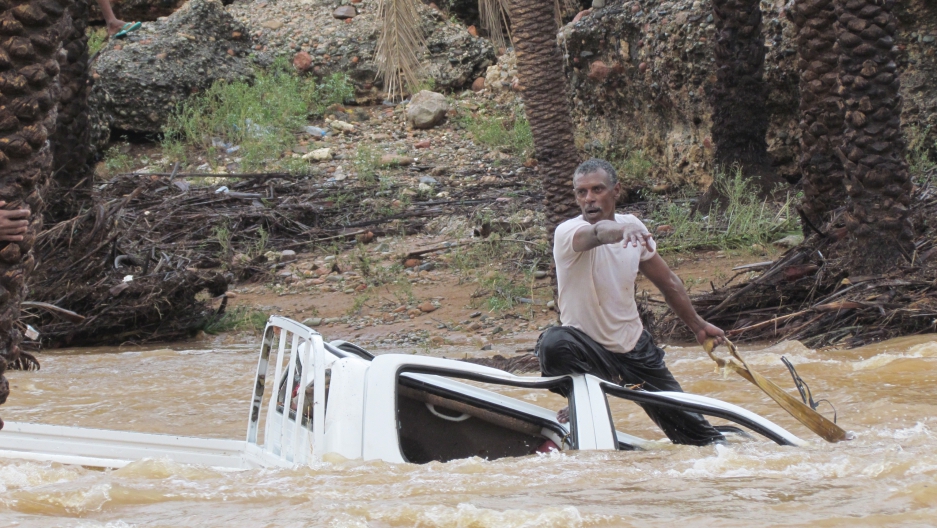 A man gestures as he tries to save a vehicle swept away by flood waters in Yemen's island of Socotra November 2, 2015.

A powerful tropical cyclone hit the small Yemeni island of Socotra on Monday, killing three people and injuring more than 200, according to a local mayor.

Cyclone Chapala intensified over the weekend to the equivalent of a Category 4 hurricane and swept over Socotra on its way to the mainland. It’s expected to land in Yemen within hours.

Socotra is more than 200 miles away from Yemen, and its otherworldly vegetation have caused nature lovers the call it the Galapagos of the Arab World.

By the time the storm reached Socotra, it had hurricane-force winds. Emirates 24/7 reported that over 4,200 people were given shelter.

Footage out of Socotra showed heavy flooding, and officials told the AP that Cyclone Chapala seriously destroyed or damaged at least 20 houses, as well as uprooted trees and sank fishing boats.

Meteorologists say the storm will weaken to the equivalent of a Category 1 or 2 before it hits the mainland, but it’s likely to still dump several times the amount of rainfall the area sees in a year. Some estimates say it could be as much as eight years of rain in a day or two. Given that Yemen is such an arid country not used to dealing with storms of this intensity, experts are worried about flash floods and mudslides.

For months, Yemen has been hammered by repeated air strikes from a Saudi-led coalition. Hundreds of civilians have been killed in the attempt to silence a coup from the Houthi rebels. The storm is likely to hit first in the port city of Al Mukalla — an Al-Qaeda stronghold.

Related Stories: The real winner in Yemen's civil war could be al-Qaeda

Another week, another Doctors Without Borders hospital bombed

'I wake up by the sound of the explosions'