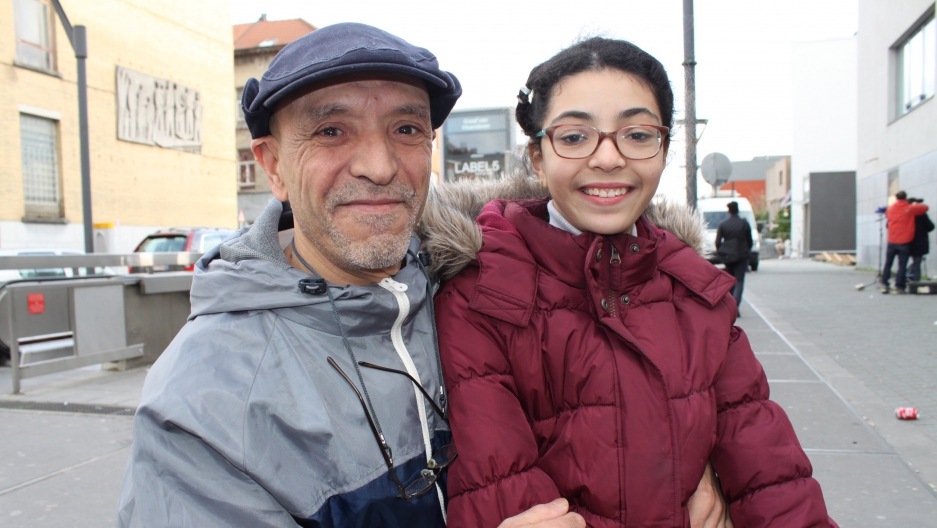 Habib, 57, and his daughter Rama, 12, live in the Molenbeek neighborhood of Brussels.

Molenbeek is just a quick subway ride away from downtown Brussels. And it’s a community struggling to come to terms with the terrorists in its midst.

Sara Corsius is a concert organizer here. She's reeling from news of the attacks in Paris a week ago but also fiercely protective of her community where some of the perpetrators grew up and lived and worked.

She's also real about the dangers ahead.

"The first reaction is everyone understand we can't react in fear," she said. "The second reaction is be very afraid."

Something shifted for her in the aftermath though. She talked to everyone she knew. And she discovered some people were aware of the recruiting by extremists going on the neighborhood. And they hadn't said anything.

"Because of not feeling responsible for this problem. If your child says someone talked to me about this, is the first thing you’re going to do to call the police? I don’t know."

She hopes people do go to the authorities going forward. That's not a given, especially if there's a harsh security crackdown.

Johan Leman is an anthropologist, and director of a community organization here called the Foyer. He's expecting tough action. And he agrees with it.

"You have to do something repressive," he said. "Meaning you have to change the policy you had vis a vis extremism. You have to adapt that to the new situation. But be very careful you don’t do collateral damage. And to avoid collateral damage, take care which words you use. Take care they understand that if you make a mistake in being repressive, it was not really because you wanted to do that. Find a good balance between repression and understanding, and moral and social support for the local population."

Molenbeek has grown rapidly in recent decades to 100,000 people. Forty percent of them are of Moroccan heritage. There are Algerians and Tunisians and other recent immigrants, too. And about half the population is under 30.

Leman has been aware of the jihadi presence here since the late 1990s.

When we sit down to talk, he rattles off the names of various figures, groups and attacks. He’s been paying close attention to the words of ISIS leaders too. He says we should all take them more seriously because once they issue a threat they try to achieve it. In 2014, ISIS leader Abu Bakr al-Baghdadi threatened global jihad. ISIS also made its own map of Europe, designating Brussels as part of France.

"We have to enter into the mind if ISIS. We have not to reason in terms of the European Union and member states ... if ISIS says Brussels is part of French territory then let us be very logical."

In other words, don't be surprised by the transborder links between Brussels and Paris.

Leman says he doesn’t care who’s at fault for the latest intelligence failure; in his view Belgium and France need to learn from their mistakes and start coordinating better. Even if they can thwart some attacks, both countries are left with the issue of how to deal with the isolation and inequality that plague communities like Molenbeek.

"I don’t find the words to make it easy for my daughters, for my family," says Habib, 57, a retired waiter originally from Tunisia. "It's not so easy for us. It’s not so easy here. I am old. I have nothing more to lose. But the young people — we have to think for the future."

As reporters swarmed all over the town square — they've been there for days — Habib took the opportunity to rail against the legacy of colonialism and Western foreign policies, which he sees as the root causes of the poverty and radicalism here.

Even if all that were true, I asked him, what does Molenbeek need now?

"It's too late," he told me, with an edge of despair in his voice "The people of Molenbeek are denied. And now [look] what they're doing."

I ask if "denied" means the lack of jobs, the discrimination people face.

He nods and repeats my words. Jobs. Discrimination.

It's hard to know what to say. Unemployment in Molenbeek runs around 40 percent.

Terrorism or no terrorism, kids here need better options than they're getting if they are going to build a future.