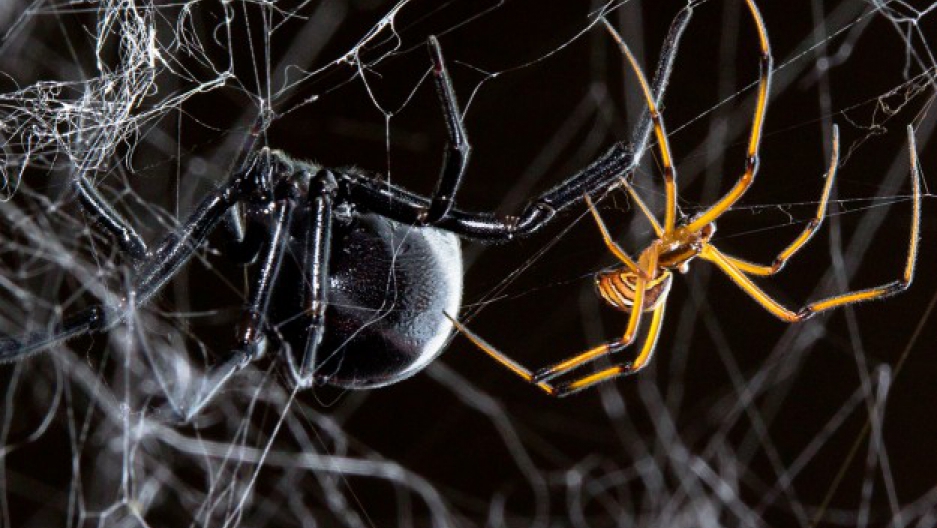 They have eight legs, multiple sets of eyes, and build webs in the corners of your house. But arachnologists Lauren Esposito and Catherine Scott say the bizarre world of spiders goes far beyond anything you’ve ever heard of. Here are eight things spiders can do that you've probably never heard of:

1. Some spiders eat their mates during copulation

Catherine Scott, an arachnologist and doctoral student at the University of Toronto says the redback spider, a species in the genus of black widow spiders, is actively eaten during copulation:

“In this species, the male, as he's transferring sperm, will perform a somersault and offer his abdomen to the female and she can start snacking on his abdomen as they're mating. [The female] does end up killing and completely consuming the spider. But the males of the species have a really great adaptation. ... He has to mate twice in order to fully inseminate the female, so as he's transferring sperm with his first copulatory organ, the female starts chewing on his abdomen. But he's able to constrict his abdomen in such a way that he sort of compartmentalizes his body so that the female is eating the tip of his abdomen, but the rest of his body is still functional. So he can stay alive and survive to do his second copulation. And then, once that's done, the female will kind of give him a hug, gather him in and start feasting away.”

2. Spiders can be romantic

Catherine Scott says “he takes a nice juicy prey item and wraps it up in silk and then presents it to the female. And she’ll accept the gift, and as she's feeding on it, the male will copulate. And it turns out that males who provide a gift to the female are able to copulate longer. However, both males and females can sort of cheat at this game. Sometimes the male doesn't wrap the gift in this beautiful silk gift wrapping. The female might accept the gift but then run off with it and not mate with him. ... But the males also sometimes wrap up a worthless item in silk and try to disguise it and present it to the female and because it’s covered with silk, she’ll accept it initially and the male will start to mate. But then, once she realizes that there's nothing to eat inside, she quickly cuts short the copulation.”

3. Spiders, as a species, have been around much longer than humans

Lauren Esposito, curator of arachnology at the California Academy of Sciences in San Francisco, says there were arachnids on Earth long before humans, insects, any other hinged-legged animals and even before flowers:

“Arachnids are one of the oldest terrestrial arthropod groups. Most of the arachnid groups date back to at least 400 million years. That's long before the dinosaurs, long before flowering plants. They're really an ancient group.”

4. Ancient spiders could grow to be enormous

How big? Esposito said they could get to up to half a meter (over 1.5 feet) in size. Scorpions got even bigger.

When we run quickly, our breathing speeds up to get more oxygen into our systems. Spiders, however, have a passive respiratory system. This means, when spiders exert themselves, “they have to stop and let the oxygen pass over [their lungs]. They can't breathe harder,” says Esposito.

6. Spiders can be milked.

Arachnologist Lauren Esposito has milked them herself, to get venom samples. “It's not my average day at the office, but it's something that I do fairly regularly,” she says. Spider venom is being studied to understand its medicinal properties and its potential for treating disorders ranging from Alzheimer’s disease to erectile dysfunction.

7. Spiders can use their webs to communicate

“The really cool thing about spider webs is they're not just for capturing prey. Females' spider webs actually also function like personal ads. The female has pheromones on her silk that are sending a message to males from a distance and providing him with information about her location, her sex, whether or not she's mated, whether or not she's hungry, which can be really important for males because courting a big female can be risky because some spiders are cannibalistic. They have these really sophisticated scent-based communication systems,” says Scott.

Catherine Scott says a certain type of male funnel-weaving spider, similar to spiders you might find in your home, produces a pheromone that it uses to seduce females. “It causes the female to enter a passive trance-like state. So to us it looks almost as if she's been knocked out. It's not clear whether it's her decision to become passive, or whether this male pheromone is causing her to to enter that trance. But once she does the male is able to sort of haul her around the web, position her the way he wants and then mate with her.”

RELATED: 6 myths about spiders (like they don't climb in your mouth when you are sleeping)