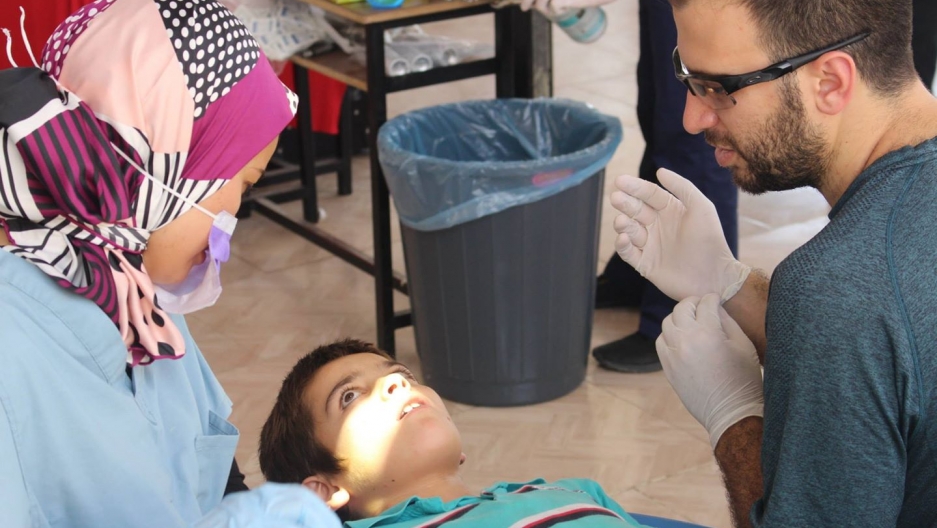 Whether to say "needle" or "sleepy juice": Dr. Sarah Aref and Farris Barakat help a Syrian boy at the temporary Syrian American Medical Society dental clinic on the Turkish-Syrian border.

Deah Barakat was a tall guy with a big smile and big ideas. He was a dental student at the University of North Carolina, and he wanted to help people from his parents’ native country, Syria, so he made a plan.

He set out to collect $20,000 to buy supplies and take a group of volunteers to Turkey’s border with Syria for a week. He began to carry his laundry basket in his car, brimming with toothbrush and tooth paste kits that he sold outside of mosques in North Carolina — $5 each — and he made a video that he uploaded to the Internet, asking for donations for the trip and for dentists permanently helping refugees.

Deah’s father, Namee Barakat, realized the size of what his son called Project Refugee Smiles. “It was funny to me,” Namee Barakat remembers. “I said, ‘You have a long way to go, my friend.’ He said, ‘Dad, I’m going to try. I’m going to give it my best.’”

But Deah Barakat didn’t get the chance to see his project through. On February 10, a neighbor burst into the Chapel Hill apartment that Deah shared with his wife, Yusor Abu-Salha. The man shot to death Deah, 23, Yusor, 21, and Yusor’s sister, Razan Abu-Salha, 19. All three were students; American and Muslim. The accused gunman, Craig Stephen Hicks, has been indicted on first-degree murder charges. Federal prosecutors are considering whether to charge him with a hate crime.

By the time that Deah, Yusor and Razan were murdered, Deah had already had raised $16,000 for his Project Refugee Smiles. Over the following month, donations poured in — more than half a million dollars. With the money in hand, the friends and family of the three young North Carolina students decided they would carry out Deah’s plan.

“I remember moving out [Deah’s] stuff from the apartment and there was like a sheet of paper there about the trip — like all the things he wanted to do. There was something there about educating the patients about dental hygiene,” says Deah’s older brother, Farris Barakat. “He had such a calculated and invested approach to this.”

In late July, Farris, Deah’s father, and more than 40 American Muslim volunteers set out for Turkey. They included friends whom Deah had encouraged to study dentistry, as well as people from across the US who had never met him but said they were inspired by him, Yusor and Razan.

From Istanbul, the group flew to Hatay province, and then drove 45 minutes to Reyhanli, a busy crossing point with Syria. 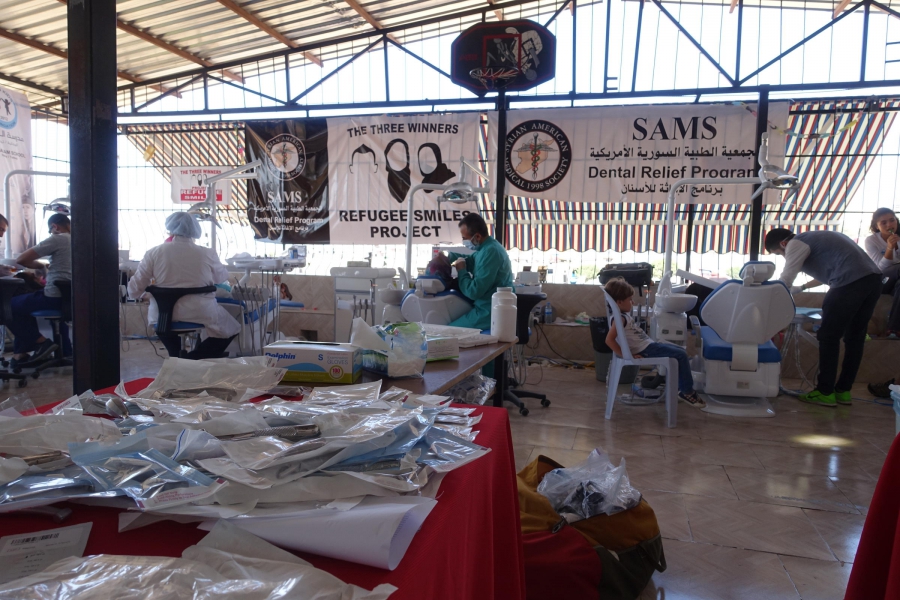 With funding from the Project Refugee Smiles fundraiser, the Syrian American Medical Society bought eight dental chairs for the temporary clinic set up at the Al-Salaam School in Reyhanli, Turkey.

Reyhanli has a small dental clinic there in a building just past the entrance of a school, the Al Salaam School. (It’s now been renamed for Razan, Deah and Yusor.)

Across a playground from the small clinic, the American volunteers set up a larger, temporary clinic with eight brand new dental chairs, bought with contributions from Deah’s fundraiser. The volunteers also put up a poster with black-and-white silhouette drawings of Razan, Yusor and Deah, and the words “The Three Winners.”

The first day of the clinic was chaotic. Farris, who was helping a Cleveland-based dentist named Sarah Aref, took on the unofficial job of “child whisperer.” Many of the kids were too scared at first to climb in the dentist chair, so Farris tried to calm them by explaining in Arabic what was going to happen — though Aref didn’t entirely agree with Farris’s approach.

In between patients, they 'debated' their differing philosophies.

Aref: “Farris decided to use the word ‘needle’ on a kid, and it freaked him out.”

Farris: “I told him how it is. He was afraid of the needle. I told him, bear with me on the needle.”

Aref: “I told him to call it sleepy juice.”

Farris: “I don't know how to translate ‘sleepy juice’ into Arabic.”

Aref: “I'm pretty sure if you said ‘sleepy juice’ things would've gone a lot better than they did.”

Farris: “Well, anyways, it worked out, and I think we took his phobia for needles and fixed it.”

Most of the patients at the clinic were children, many of whom have witnessed violence. Some had experienced it themselves. One boy getting treatment had been struck with shrapnel on a cheekbone and could no longer close his right eye. 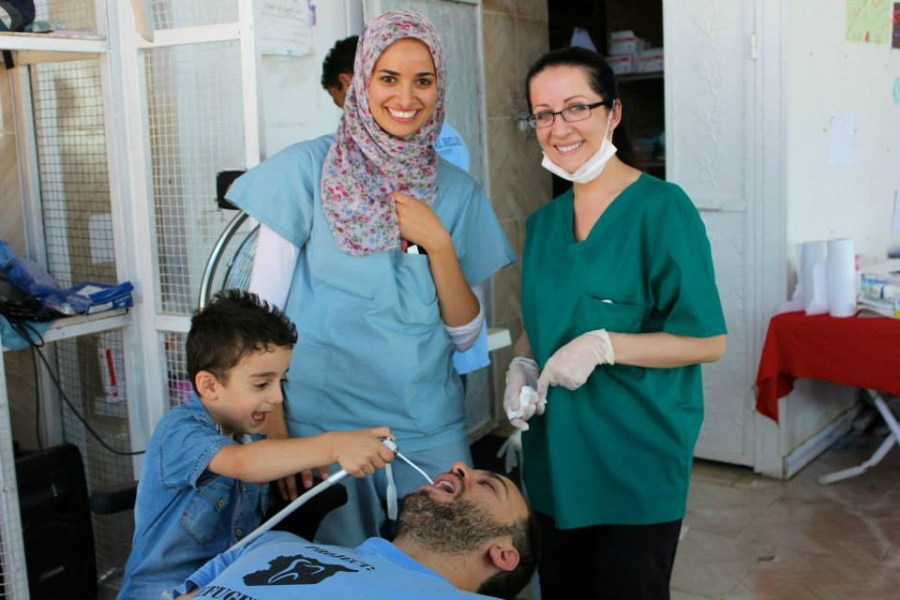 Mohammad, a boy Farris Barakat (seated) helped in the Project Refugee Smiles clinic, says he wants to be a doctor when he grows up. Standing next to him are Dr. Sara Aref of Cleveland (center) and Alena Advic of Seattle.

On the fourth day of the clinic, a few dozen high school students serenaded the volunteers with songs about Homs and Hama, Syrian cities that largely have been destroyed by the war. “Heaven. Heaven. Heaven,” they sang. “Our home is really heaven.”  Several volunteers wiped tears off their cheeks. Farris covered his eyes.

Since his brother’s death, Farris Barakat has quit his job managing a courier company in North Carolina, and is helping to build a Muslim community center in Raleigh named after Deah, which in Arabic means light.

“I think what I’m doing through the Light House project is what I’m meant to do in a sense, and what I want to do. And this is helping me explore everything I’ve ever wanted to explore, at the end of the day, to the work that earns me personal salvation,” Farris said one afternoon at the clinic. “That’s where I’ll see my brother and the prophets, all of them.”

So far, Deah’s Project Refugee Smiles has helped more than 700 Syrian refugees, and his family says the donations will continue to fund dental care and other refugee relief.

Still, Farris Barakat says he’s caught himself wishing he could give back the great things that have happened since the shooting if it meant he could have Deah, Yusor and Razan back.

RELATED: How can you help Syrian refugees? 6 groups that are doing important work

Jorge Valencia reported from southern Turkey with support from the International Center for Journalists, sponsored by the Ford Foundation.