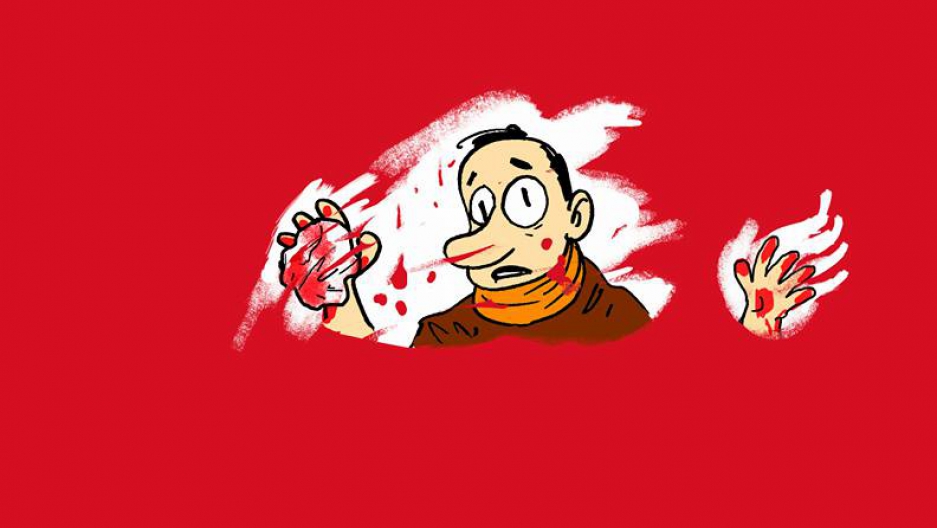 The Arabic words on this cartoon translate: "From Baghdad to Beirut to Paris". The cartoonist, Anwar of Egypt, is implying that the blood of victims in Iraq, Lebanon and France is the same blood. The lack of a caption illustrates that the violence leaves him speechless.

The French Tricolour has been emblazoned on landmarks as varied as London's Tower Bridge to Sydney's iconic opera house and featured in hundreds of political cartoons drawn in response to the vicious attacks in Paris last Friday. Satirists in the Arab and Muslim world are responding with different visual metaphors.

Jonathan Guyer is a fellow with the Institute of Current World Affairs and a scholar of satire in the Middle East.  "I saw a cartoon in the Lebanese newspaper As-Safir. It shows a map of Lebanon looking in the mirror and seeing a map of France saying, 'Dear Mother, I hope that you heal.'"

Some Lebanese have felt slighted by the global embrace of Paris in the wake of the multi-prong attack by ISIS on Friday. Just a day earlier, 45 people died in Beirut in a brazen suicide bombing aimed at people, just like in Paris, who were just going about their daily business.  The global response was anemic. Guyer acknowledges the difference in how the world reacted to the two incidents but says anger is not the emotion coming through in Arab political cartoons.

''I think this really is about a connection between two cities more than a divisive set of events. It shows that terror, when any place in the world is struck, has an impact globally."

One of the most powerful images Guyer has seen was drawn by Anwar, a young cartoonist from Egypt. "It shows a man wiping blood off of a window. It's covered in this bright red blood. The caption says: 'From Baghdad to Beirut to Paris.' My reading of it is that all blood is the same blood, whether it's Iraqi blood, Lebanese blood or Parisian blood. And it's this unifying message of when one of us suffers, we all suffer."

Guyer says for the past year or so, Arab and Muslim cartoonists have taken on ISIS, making fun of their so-called piety, their craven tactics and using them as a punchline. "There's really no red line in the Middle East about making fun of ISIS."

Some Arab world cartoons also betray a sense of resignation about terrorism. After Friday's bloodbath in Paris, Egyptian cartoonist Walid Taher republished a cartoon he originally drew last winter. In the cartoon, the word terrorism is spelled out on the two men's limbs while they greet each other as if nothing's happened.

Guyer says one depressing but predictable Arab world response to the Paris attacks are conspiracy comics. "There's also a whole genre of conspiracy comics which are totally ridiculous that show ISIS as the puppetry of the west or a zionist conspiracy. Obviously these are ridiculous notions but actually appear quite a lot in the Arab press." 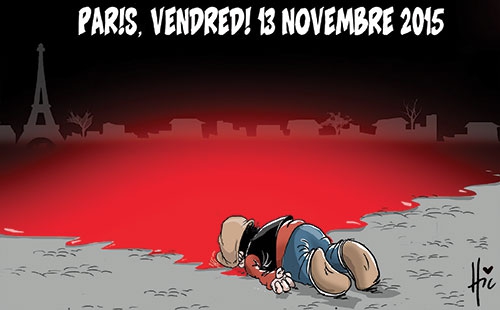 Algerian cartoonist Le Hic uses the powerful imagery of Aylan Kurdi, the young boy who was found dead on a Turkish beach after drowning while trying to migrate to Europe. Aylan Kurdi's image moved the world and Le Hic is making two points: those who died in Paris are as precious as Aylan Kurdi. He's also suggesting that more people like Aylan Kurdi could die if European countries react to the ISIS attacks in Paris by closing their borders.

The aftermath of terrorist attacks is always a tricky time for political cartoonists, says Guyer. "What I would say is it's very difficult to encapsulate the complexity and nuance of an attack whether it be on Paris, Beirut or Baghdad."

Guyer feels like many artists have dumbed down the meaning of the Paris attacks, making it all about the colors of the French flag. "I would love to see more comics and cartoons that take on personal reactions of what's happened and how people feel about it, messages that goes beyond simple notions of nation states," he says.