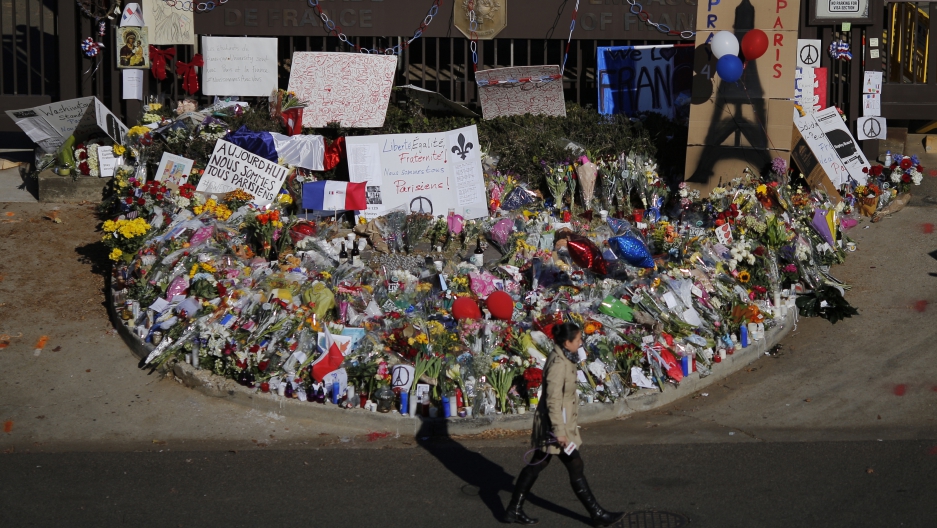 Flowers and expressions of sympathy, at the entrance to the French embassy in Washington.

Could an attack like the one in Paris last Friday happen in the United States?

According to Juliette Kayyem, former assistant secretary at the Department of Homeland Security, the answer is a very qualified "yes."

It is a scenario that the US has prepared for, Kayyem says.

When her own kids ask if an attack like this could happen here, in the United States, “I tell them, as I told them this weekend, that it can. But people are working really hard to reduce the risk.”

Authorities here took serious notice of the first attack of this nature, which took place in Mumbai, India, in 2008 — with coordinated attacks on multiple targets in an urban area. These types of attack are distinct from ‘lone wolf’ incidents which are much harder to detect, but which have a more limited impact.

The first line of defense is surveillance and other forms of intelligence gathering to prevent such attacks from being executed.

“What we saw happen on Friday wasn’t beyond the pale of imagination whatsoever,” says Kayyem. “I think what’s surprising is the extent to which something like that could be planned, organized, paid for, implemented with near perfection. And it appears barely any intelligence to suggest it was about to happen.”

“There are three pieces to any terrorism incident,” Kayyem explains. “We call them the ATM. Arms. Training. Money. So those three things are all being implemented by the terrorists. And the fact that none of those pieces were picked up apparently with any precision by French or international intelligence agencies is surprising.”

Kayyem notes that France and other European countries curtailed surveillance activities after the Edward Snowden leaks. The US did too, but to a lesser extent.

The other problem France faces is simply one of scale. “The problem is, is that there is so much chatter,” says Kayyem. “And if you look at a country like France — which is probably monitoring a couple of thousand people who’ve been to Syria, (and) they now have a refugee influx — its capacity at this stage (is limited).”

“In every terrorist incident there is always going to be chatter found after the fact,” she adds. “It’s inevitable that something was picked up. The problem was that the different pieces weren’t put together.”