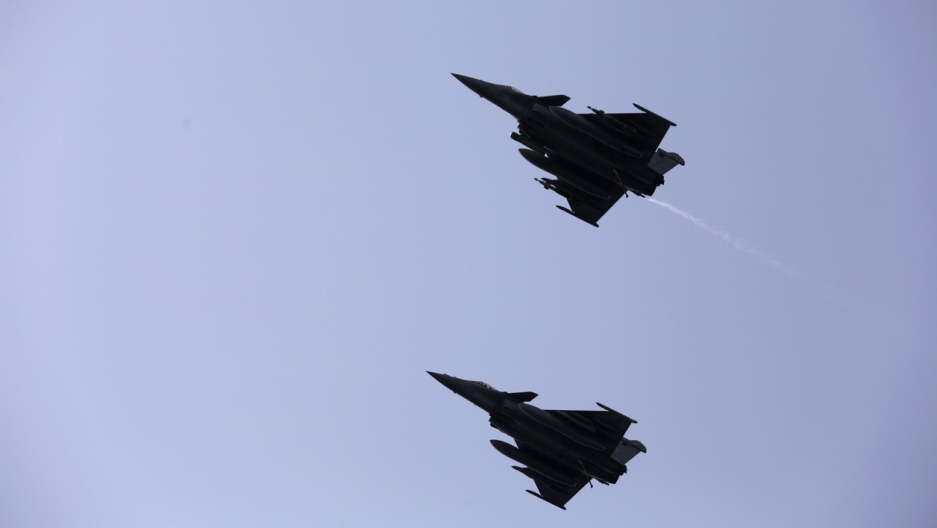 France has struck back. Over the last two days it has bombed the Syrian city of Raqqa dozens of times.

The Islamic State calls Raqqa its de facto capital. It’s been in full control of the city since January 2014. The group’s headquarters are there, among many other state-like institutions.

The city is totally isolated. Information about what is happening there comes almost exclusively from an activist group called Raqqa is Being Slaughtered Silently. Members risk it all to post stories and pictures of how life has transformed there under the Islamic State.

Raqqa is the place countries bomb when they need a symbolic victory, when they need to retaliate or demonstrate their strength. Jordan bombed Raqqa after the Islamic State captured and burned alive one of its fighter pilots. Now France is bombing Raqqa in response to the Paris attacks that killed 129 people on Friday night.

The Islamic State, of course, expected that. And according to activists in the city, the terrorist group had prepared for it, evacuating most of the target buildings in advance of being hit. There haven’t been any reports of civilian casualties, though Raqqa is Being Slaughtered Slowly said airstrikes struck an urban area, and also a clinic and a museum.

With no outsiders on the ground it’s hard to know anything for sure. The United States thinks it probably killed Mohammed Emwazi — the Islamic State’s celebrity executioner — last week in an airstrike on Raqqa, but that hasn't been confirmed.

Raqqa is used to airstrikes. Syrian, American and Russian jets have been bombing the city for years. But the French barrage appeared heavier than usual, “mounting minute by minute,” according to The New York Times. The strikes knocked out electricity and water.

A Syrian antigovernment activist on Twitter reminded France that not all of Raqqa’s citizens are members of the Islamic State, and urged the country to use caution.

The Group of 20, or G20, is a collection of the world’s largest economies. They are all meeting in Turkey right now. Climate change was supposed to be on the top of the agenda. And they did talk about that a little bit.

But mostly they talked about the Paris attacks and what can be done to stop the Islamic State. All the key players were there: Germany, Britain, France, the US, Russia, Turkey, and others. So it seemed a swell time to come together and talk about war.

Days before, top diplomats from many of these countries — meeting in Vienna — had already agreed on a framework for a peaceful political transition in Syria, which would see UN-monitored free elections in 18 months. It’s a lofty goal.

At the G20, however, world leaders were more interested in talking about how to fight the Islamic State. One of the key sticking points has been Russia’s involvement in the conflict. Russia is an ally of Syrian President Bashar al-Assad. It joined the Syrian air war earlier this year on the pretense that it was targeting the Islamic State. But so far it has mostly targeted Syrian rebels fighting government forces, some of which were receiving training and weapons from the United States.

During the meeting in Turkey, US President Barack Obama and Russian President Vladimir Putin were caught on camera having what looked like a heated discussion, both men leaning in and gesturing with their hands in a way that made the whole room take notice.

In the end the world leaders agreed to work together to destroy the Islamic State. They vowed to share intelligence, track border crossings and boost aviation security to halt the movement of Islamic State fighters.

That’s all well and good. But it doesn’t look like the G20 talked much about addressing any of the origins of global terrorism, or of ways to ensure terrorism can’t continue to thrive in the long-term.

The need to fight not only a military battle but also the fundamental roots of terror was put forward by Obama himself earlier this year. At a major counterterrorism conference in Washington, DC, Obama called on the world to address the “grievances that terrorists exploit.” It’s worth quoting the president in full:

“When people — especially young people — feel entirely trapped in impoverished communities, where there is no order and no path for advancement, where there are no educational opportunities, where there are no ways to support families, and no escape from injustice and the humiliations of corruption — that feeds instability and disorder, and makes those communities ripe for extremist recruitment. And we have seen that across the Middle East and we've seen it across North Africa. So if we’re serious about countering violent extremism, we have to get serious about confronting these economic grievances.”

There has been little discussion about these points since the Paris attacks, or even much since that counterterrorism conference. It appears to be forgotten in a blaze of airstrikes and weapons transfers.